Leonardo da Vinci - Renaissance Man Content from the guide to life, the universe and everything 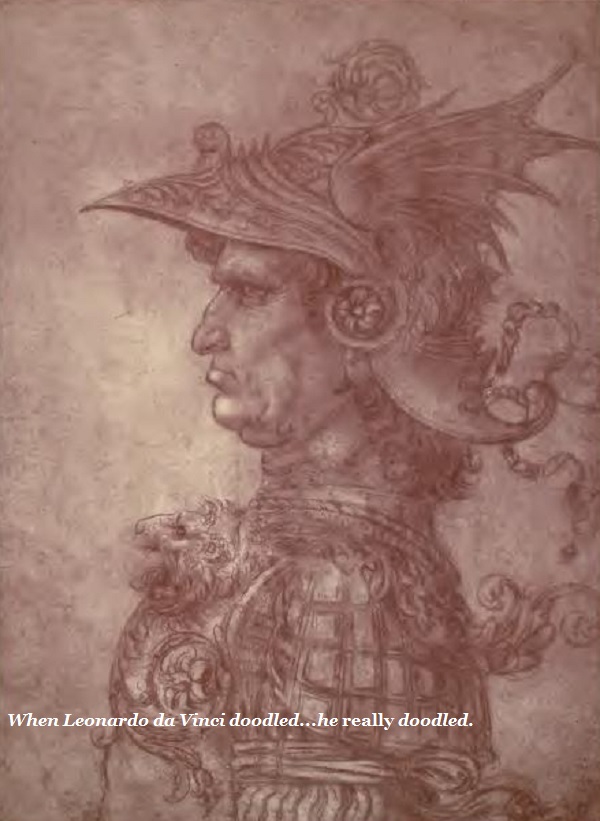 Leonardo da Vinci was a universal genius. His studies of nature and technology were as important for the people of his time as the art for which he is remembered today. The few paintings he created have remained incredibly popular, with at least two of them being among the most famous works in the world: 'Mona Lisa' (also known as La Gioconda) and 'The Last Supper'. Also easily recognised is his study of human proportions in the drawing of the 'Vitruvian Man'1. His work played a key part in the era known as the Renaissance.

Leonardo was born in Vinci on 15 April, 1452. He was the illegitimate son of the wealthy legal notary and landowner Ser Piero da Vinci - his mother Catarina left him to be raised by his father and went on to marry a local peasant. Michael White, in his book Leonardo: The First Scientist (2000), says Leonardo was unlikely to have received formal schooling as he was left-handed (schools would have 'corrected' his left-handedness) so it was more likely that his family (for example his uncle Francesco) would have given him a basic education. He commenced an apprenticeship in Florence under the artist Verrocchio in about 1467. There he learned sculpture as well as painting, plus music (he played the lira da braccio lyre). His appearance became dandy-esque - he wore pink tunics that were unfashionably short and styled his beard into curls.

When his apprenticeship ended, Leonardo continued working in Verrocchio's studio. Verrocchio was known to be homosexual, and homosexuality was generally tolerated amongst artists, but Leonardo and three others were accused of a crime in 1476. The case was dismissed after three months of investigation, so Leonardo was able to continue with his artistic career. He received commissions, but also began to establish his reputation for leaving works unfinished - notably his 'Adoration of the Magi' and 'St Jerome' were not completed before he left Florence for Milan in 1482. This may partly be because Leonardo was a perfectionist - the high standards he set for himself may have made him hesitate to finish the work he had been asked to do.

Leonardo had offered his services to the ruler of Milan, Ludovico Sforza, as a military engineer, and also proposed making the largest-ever bronze equestrian statue in honour of Ludovico's father2. He actually joined Sforza's court as a musician, and also carried out more painting. In 1487 he entered the competition to design a dome for Milan's cathedral, but was unsuccessful. He designed churches in the Byzantine style with circular layouts, and designed architectural features such as staircases, but it is not known whether any buildings were constructed to his plans.

In 1490 ten-year-old Gian Giacomo Caprotti, nicknamed Salai (little devil), joined Leonardo's household as a servant and apprentice. Although Salai's status was seemingly lowly, Leonardo bought him clothes and excused his bad behaviour, including the stealing of money. A handsome boy and man, Salai was Leonardo's companion until 1517, and Leonardo bequeathed him some land and a house in his will.

Sforza commissioned Leonardo to paint 'The Last Supper' in 1495 - it was completed in 1498, the year before an invasion of Milan caused Leonardo to leave the city. By 1502, Leonardo was working as a military engineer for the notorious Borgia family, and even designed a bridge for the Sultan of Istanbul, but he returned to Florence in 1503. Leonardo did not receive an inheritance after his father died in 1504, as his half-siblings claimed the estate, but he was the beneficiary after his uncle Francesco died in 1507. In 1505, Leonardo began painting the Mona Lisa and was also commissioned to paint 'The Battle of Alighiari' for Florence's council hall3.

In 1506, Leonardo returned to Milan and he stayed with the Melzi family for a time. Francesco Melzi, aged 15, became his apprentice and companion in about 1508. In 1507 Leonardo became court painter to Louis XII, as Milan was under the control of the French. Milan changed hands again in 1512, so Leonardo and his household travelled to Rome in 1514 at the behest of Pope Leo X to work on architecture and hydraulics. Francis I had succeeded Louis XII as king of France in 1515, and he invited Leonardo to join his court. Leonardo and his household, including Melzi and Salai, travelled with him, but Salai returned to Milan in 1517. Leonardo experienced some ill health, including the paralysis of one of his arms so he could no longer paint. He died on 23 April, 1519, in Cloux. His legacy (including the many notebooks he had written and sketched in during his lifetime) passed to Melzi.

Although Leonardo was just one of the three star artists of the High Renaissance, along with Michelangelo Buonarroti and Raphael (Raffaello Sanzio), he made his mark on the development of the subject. In 1473 he depicted the town of Vinci in paintings that are considered to be the first landscapes in Western art. His portraits were the first to create the impression of a relationship between viewer and subject. He was one of the first, if not the first, to create large, organic compositions dependent on the subject rather than simply dependent on monumental conventions. Leonardo was the inventor of artistic effects such as aerial perspective (as demonstrated in the background of the Mona Lisa), and pioneered sfumato (blurring or softening of sharp outlines) and chiaroscuro (light and shade effects). He also reformed the art of drawing by making sketches, drafts and studies with red chalk. His aim was always to depict nature as realistically as possible. For him the visual arts were the only true way to imitate nature.

Leonardo's 'The Last Supper' was painted on one wall of the refectory (dining hall) in the Convent of Santa Maria delle Grazie, Milan, Italy. It is the first picture of this subject that shows Judas on the same side of the table as all other disciples; the separation is achieved by giving every figure its own personality. The main point of the perspective composition is Christ's head, so you immediately recognise him as the most important person. Another remarkable fact about the perspective in this painting is that the table is drawn in a way which makes it look like it would reach out into the room, as if it could stand next to the others in the dining room.

Many artists drew versions of the Vitruvian Man, a concept of proportions invented by the Roman architect Vitruvius. He thought that the body of a man fits perfectly into the geometric figures of circle and square, with the navel being in the centre. Leonardo was the first artist who corrected the Vitruvian concept according to his own anatomical studies.

In order to hone his knowledge of human anatomy, Leonardo carried out dissections himself (of men and women) and sketched the findings in his notebooks. He also studied the anatomy of plants, focusing on the ways leaves can be arranged around stalks, and the way tree trunks grow.

He also had a fascination with birds - he had an unusual ability to see details of their wing movements and to draw what he saw. He studied optics, including the camera obscura. He considered the potential for human flight, and noted: 'As much pressure is exerted by the object against the air as by the air against the body', foreshadowing Newton's laws of motion. He designed flying machines with flapping wings, a parachute, and the 'aerial screw' helicopter-like device.

Leonardo knew some chemistry in relation to the preparation of pigments for painting, but also studied fire and the quality of air needed to sustain life. He worked on geography and geology, and created a number of maps. He even designed a diving suit, but wrote: 'In view of the wickedness of men, I do not publish or divulge the method I have invented for remaining under water, for they would make use of it in order to commit murder at the bottom of the sea, by destroying vessels and causing them to sink together with those on board'.

In Milan he met the noted mathematician Pacioli - Pacioli taught him algebra and other mathematical techniques and Leonardo supplied illustrations for Pacioli's book De divina proportione. Leonardo also studied ballistics and designed various catapults and war machines in his role as a military engineer, some of which were more fantastical than practical. He even built some machines himself, including a mechanical walking lion in 1515 for Francis I.

Leonardo documented his work in numerous notebooks during his lifetime. He usually wrote in mirror writing, possibly because it was easier for him to work from right to left, being left-handed, and possibly because it would make it more difficult for other people to find out what he had been working on in case the notebooks fell into the hands of a rival. He made some attempts to organise the material into themes, but there was so much that he never published it. After his death, his writings were scattered around the world.

Leonardo wrote about art theory in notes that were published as the Trattato della Pittura - it was the most universal treatment of the subject at that time, and it influenced many later texts on art theory. The Codex Arundel contains writings on science as well as art, and a digitised copy can be viewed online via the British Library. Digitised copies of more of his works can be found at the e-Leo website.

Leonardo also turned his hand to fiction - during an outbreak of the plague in Milan (1478–82) he wrote about being swallowed by a monster. He read classical literature (eg works of Plato) in Italian translation and he taught himself Latin in 1487. He wrote some poetry, but also wrote the Paragone of Poetry and Painting, concluding that painting is superior to poetry.

1Familiar to British TV viewers of the 1960s, '70s and '80s as the logo for documentary series World In Action.2The statue was never cast in bronze, but models were made.3Michelangelo was also commissioned to create a wall painting for the hall - many people came to visit the hall and see the two master painters at work. Neither painting was ever completed, and the images deteriorated, so only copies and preparatory sketches survive.