Ida Tarbell: Journalist, Historian, Pioneer Content from the guide to life, the universe and everything 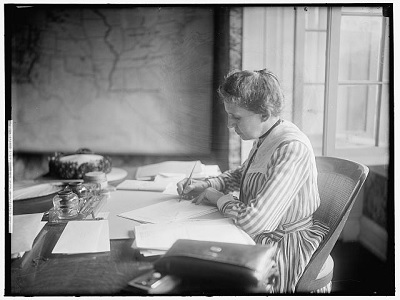 Ida M Tarbell (1857-1944) was called a 'muckraker' in her day: we would call her an investigative journalist. She thought of herself as a historian. Her greatest love was research. Her favourite subject was human beings. She wanted to know where they were coming from, and hoped to head them in a better direction. Though a determined woman who broke down a lot of gender barriers in her day, she wasn't comfortable with some of the leading feminists of her time – or they with her. She was serious-minded, kind, practical, and open in her thinking. She also came a long way from Hatch Hollow.

From Titusville to Paris and Beyond

Not since I discovered the world not to have been made in six days of twenty-four hours each, had I been so intellectually and spiritually upset. I had held a revolution as a noble and sacred instrument, destroying evil and leaving men free to be wise and good and just. Now it seemed to me not something that men used, but something that used men for its own mysterious end and left behind the same relative proportion of good and evil as it started with.
– Ida Tarbell, All in the Day's Work: An Autobiography

Hatch Hollow isn't even a wide place in the road in Erie County these days. Amity Township hasn't got a town or village left in it. Ida was born there in her grandparents' log cabin in 1857. Her father wasn't home: he was in Iowa, single-handedly clearing land for a farm, and building what he hoped would be a home for his new family. Alas, this was not to be: 1857 was a bank panic year, and young Mr Tarbell soon found himself a long way from home and without a penny to his name. Since he was a teacher as well a farmer and joiner, he determined to 'teach his way home'.

These days, it would take you about 12 hours to drive the distance, even if you stopped for gas. It took Franklin Tarbell a year and a half. Baby Ida wasn't very impressed with this stranger who was hugging and kissing her mother. 'Go away, bad man,' she scolded. (She made friends with him eventually.)

The Tarbell family never got to Iowa. Instead, Franklin became caught up in western Pennsylvania's newest industry: oil. From being a niche substance in quack cures1, petroleum products were turning into big business as a replacement for whale oil and other fuels. Fortunes were about to be made. Franklin Tarbell began by making oil containers, and moved into production, making a living for his family and securing their modest upward social mobility. Ida and her younger siblings grew up in respectability and relative comfort. She attended Allegheny College, a newly-coeducational institution2.

After teaching for a couple of years in Poland, Ohio, she discovered that she didn't like teaching. This wasn't surprising: her teaching load would have killed a less hardy person, and the neighbourhood was unfriendly. Ida returned home and took up work with the Chautauqua movement. Founded on the shores of Lake Chautauqua in New York state by a Methodist clergyman, the movement combined summer camping with what we would now call TED talks – although the talks were a lot longer than 17 minutes. 19th-Century attention spans ran to two-hour talks. The Chautauqua people turned Ida into an educational writer: for the next six years, she annotated books and lessons for the movement's continuing education programme. Americans who had never had an opportunity to attend college were eager to increase their knowledge. This programme was wildly popular. But Ida decided she wanted more out of life.

With $150 in her pocket and a Plan (with a capital P), Ida moved to Paris for three years. Her Plan involved researching an academic biography of Madame Roland, a significant saloniste and political figure during the French Revolution. To support herself, Ida began sending articles about daily life in France to US newspapers and magazines. Her work was a success – at least, enough to allow her to live on a shoestring budget among the students of the Latin Quarter. She met a lot of interesting people and had fascinating experiences while doing her research, which was much along the lines of a modern-day academic dissertation. As often happens with dissertation research, she found that her views on the French Revolution and the role of women in history had changed quite a bit once she knew more about it. Ida was a lifelong learner, like most Chautauquans.

By the time Ida was ready to come home to Titusville and start writing up her book on Madame Roland, her talent had been discovered by SS McClure, the energetic owner of McClure's Magazine. He set her to writing a biography of Napoleon, who was a trending interest in the 1890s. To do her research, she used the considerable resources of the Library of Congress. Her books on Napoleon and Madame Roland were popular – first as magazine serials, then as books. She next undertook research on Abraham Lincoln, which meant she stayed in Washington, DC, for prolonged periods.

She became good friends with philanthropist Gardiner Greene Hubbard and his son-in-law, Alexander Graham Bell of telephone fame. Her friendship with these historical figures means that she was able to leave us interesting titbits in her writings, such as the fact that Bell was considered 'the most handsome man in Washington', and that the only reason the Bell Telephone Company was started was that Mr Hubbard refused to let Bell marry his daughter until he turned his invention into a useful utility (which Hubbard helped finance). Ida shared a boarding house with Senator George Frisbie Hoar (1826-1904) and his wife, with whom she became good friends. However, most of her friends were scientific pioneers, reformers, or journalists.

In addition to her work on Lincoln   – she wrote 5 books in all, some with the help of Robert Lincoln, the late president's son – Ida became famous for her writing on business practices. In particular, her research on the scandals involving John D Rockefeller's Standard Oil Company and the investigations which led to antitrust legislation earned her the reputation of 'muckraker'. 'Muckrakers' were early investigative journalists who exposed corruption in government and business, often leading to serious legal reforms. Ida had first-hand knowledge of the ways in which ambitious oil companies like Standard used under-the-table agreements with railroads and other industries to eliminate competition from smaller businesses. Her father and the other early oil producers in Titusville had suffered.

Ida was always scrupulously fair to her subjects, as US Steel founder Elbert Henry Gary3 found out when she researched him. She began by being suspicious that Gary was another 'robber baron', but he invited her scrutiny, telling her that if she found anything dishonest in his way of doing business, he wanted to know about it. She ended up admiring him.

After a dozen years with McClure's Magazine, Ida left, along with most of the founding staff, during a dispute between SS McClure and his business partner over the direction of the magazine. During her tenure there, McClure's had become one of the leading periodicals in the US. McClure's published in serial form many books still admired today, such as stories from Rudyard Kipling's   Jungle Book. After leaving, Ida joined fellow McClure's alumni in staffing The American Magazine, which was Frank Leslie's Popular Monthly under new management.

I realized more and more as I went on that I did not really know much more of my subject than they did in Bisbee, Arizona, or Little Rock, Arkansas... but I certainly knew fewer things that were not so.
– Ida Tarbell, All in the Day's Work: An Autobiography

During the First World War, Ida served on the Women's Committee on the Council of National Defense. At first, the head of the committee, Anna Howard Shaw, was opposed to Ida's presence. Suffragists and other feminists often had arguments with Ida because they couldn't understand why she failed to embrace their cause wholeheartedly and enthusiastically. Ida, in turn, couldn't understand why the militant feminists refused to adopt her more nuanced approach: she objected to what she saw as their denigration of homemaking as a profession, as well as their hostility to men in general. She seriously disagreed with the attitude of many feminists from the late-19th and early-20th centuries, which held that women were inherently morally superior to men. She simply didn't believe that giving women the vote was going to solve all of society's problems. It could be argued that history has vindicated her stance.

In spite of their ideological disagreements, Ida and Anna Shaw worked well together, helping to 'spread the word' about victory gardens and austerity during the 'war to end war'. Ida was amused at the outrage experienced by the women's committee when they found themselves under the leadership of the US Food Administration, led by Herbert Hoover – a man. Ida saw that managing the food resources of a continent-wide nation of 100 million was going to take more organisation than these volunteers could muster.

After the war, Ida had a chance to help her old friends in Paris. She was sent to France as part of the Red Cross. She reported on the rebuilding of the country for Red Cross Magazine.

A pacifist by conviction, Ida disapproved of the war, but trusted Woodrow Wilson to make good on his post-war promise to bring about a lasting peace through the League of Nations. Both during and after the war, she travelled the country as a Chautauqua speaker in support of Wilson's ideas. She even clashed with long-time presidential candidate William Jennings Bryan over the question of financial and military support for France. In the end, Wilson didn't live long enough to succeed in realising his vision: the US Senate never signed his Covenant.

Ida settled down on her farm in Connecticut, and did freelance writing. She had never married, but was surrounded by family members. She continued to travel abroad in the 1920s. Once, she interviewed Benito Mussolini. Her portrait of him in print was surprisingly flattering, causing people to fear that she had mellowed with age. 'He might be – was, I believe – a fearful despot, but he had a dimple,' she wrote. Ida put it more philosophically in her memoirs, which she published in 1939, five years before her death at 86:

Nobody begins or ends anything. Each person is a link, weak or strong, in an endless chain. One of our gravest mistakes is persuading ourselves that nobody has passed this way before.
– Ida M Tarbell, All in the Day's Work: An Autobiography

If you want to get the flavour of this woman's varied experiences, you couldn't do better than to read her own account of it in All in the Day's Work: An Autobiography, Ida M Tarbell, New York: Macmillan, 1939.

Get an idea of what Ida's brand of journalism could do to make the world smaller4: read this illustrated article about Louis Pasteur from an 1893 issue of McClure's. Ground-breaking stuff for its time.

Want to see what Ida and her world looked like? Here's a slideshow with images that should help set the scene. Like most US-written sketches of Ida, it emphasises her role in the fall of the Standard Oil monopoly. This is normal: that's what she's remembered for in the school curriculum, much as she would have objected.

1The term 'snake oil salesman' used to be a literal description.2For those unfamiliar with the old-fashioned word, 'coeducational' was polite talk for 'lets women in'.3Gary, Indiana is named for EH Gary.4A little like h2g2.