Mary Had a Little [Expletive Deleted]: Historical Moment in Sound Recording Content from the guide to life, the universe and everything 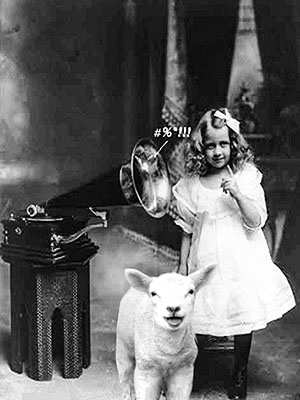 The history of sound recording is an exciting one, full of landmarks and incredible technological breakthroughs. A lot of labour went into the process: before the modern world could preserve the sounds of the Beatles or allow sneaky governments to wiretap their enemies, geeks had to put in untold hours of work to find the right materials and conditions for transferring noises into storable records that could be replayed on devices. It wasn't easy.

Early experiments with tin foil1 yielded less than satisfactory results. Paper and lampblack (soot) were no better2. Eventually, they settled (for a time) on wax. Wax had the advantage of being replayable with tools available at the time, which was the ultimate goal.

The researchers also tried coated glass, in a process similar to photography of the time. Now that we have the techniques needed to play them without destroying them, the experimental glass discs from the 1880s make interesting listening. Especially the one which records another historic first: the first-ever recorded swear word.

And now, of course, you want to know: which word?

The date: 11 March, 1885. The place: The Volta Laboratory in Georgetown, Washington, DC, a research laboratory founded by Alexander Graham Bell, his cousin Chichester Bell, and Charles Sumner Tainter. Whereas Edison called his invention a 'phonograph', the Bells called theirs a 'graphophone'. On this day, their experiment was designed to show whether they could record sound using a photographic emulsion on glass.

They could: they did, and now scientists in a field called archeophony have figured out how to play it back. On this particular disc, Tainter and his co-worker, HG Rogers, recorded 'Mary Had a Little Lamb', the usual trilled r's (a Bell trademark), and some slang. 'How's this for high?' meaning 'What do you think of that?' or 'How do you like them apples?' But in the middle of Tainter's recital, something went technically wrong. Here's the official transcription of the Smithsonian Institution:

According to archeophonist Patrick Feaster at the annual conference of the Association for Recorded Sound Collections in Rochester, New York, 19 May, 2012, 'the unanimous consensus among researchers who spent time with this recording appears to be this, "Oh, ... "[shows word on screen, loud laughter by audience].' We can't show you the word, either, due to this site's profanity filter, but the word is sometimes referred to as the 'F-bomb'. Mr Charles Sumner Tainter, dedicated early sound scientist, had uttered the F-bomb. In 1885. We are profoundly shocked.

Or maybe we aren't. As one YouTube user commented, '...and the years just faded away.' It may reassure us to know that those early researchers were human, after all. Who knows what else we'll find as we continue to rummage in the technological attic? Alexander Graham Bell singing in the shower, perhaps?

What do you hear when you listen to this historic recording?

If you would like to listen to Patrick Feaster's talk in its entirety, set aside 40 minutes to delve deeper into the subject of archeophony.

1To clarify, the tin foil was being used as a medium to record sound onto rather than a material to make hats out of.2In fact, that version of 'Au Claire de la Lune' wasn't played back until 2008, when somebody did something clever, computerised, and digital. French scientist Leon Scott's phonoautograph process wasn't actually intended to make reproducible recordings, only graphic representations of sound.