Henry Dunant and the Founding of the Red Cross Content from the guide to life, the universe and everything 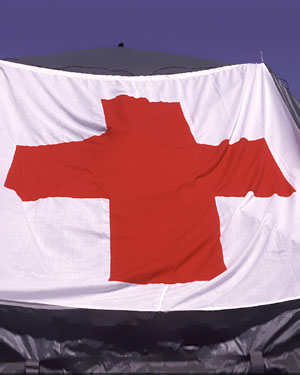 The Red Cross is an international organisation of volunteers who help in disaster areas and provide medical and humanitarian aid during conflicts. The organisation that was to become the Red Cross - known as the Red Crescent in Muslim countries due to the Christian iconography of a cross - was the brainchild of one man following his experiences caring for the wounded in the aftermath of the notoriously bloody Battle of Solferino. This is his story.

Henry Dunant was born to a wealthy and socially-minded family in Geneva, Switzerland, in 1828. After some schooling he was apprenticed to a bank and eventually found himself in the Swiss colony in Algeria building up his business interests. He wanted to build a mill there but was having difficulties getting the documents he needed. Dunant decided to go straight to the top to solve his problem, seeking out Napoleon III. At the time, the Emperor was in northern Italy fighting the Austrians in what is now called the War of Italian Unification. So it was that Dunant found himself at the Battle of Solferino.

On 24 June, 1859, French and Sardinian troops, led by Napoleon III, faced Austrian soldiers in what would become the most important battle in the War of Italian Unification. There were around 300,000 soldiers fighting, and at the end of the battle the field was strewn with 6,000 dead and 40,000 wounded.

The French army's medical services were grossly insufficient for such numbers and those who could do so streamed to a nearby village called Castiglione in search of help. Many of them ended up in the Chiesa Maggiore, a church, which is where Henry Dunant found them on the evening of the battle.

Referring to this time, he later referred to it as 'chaotic disorder, despair unspeakable and misery of every kind'. Dunant wanted to help. He organised the local women to treat the soldiers' wounds and do what they could for them. They strove to help for three days and nights.

The memory of what he had seen stayed with Dunant. In 1862 he published a book called A Memory of Solferino. The book covers three areas – the battle itself, the aftermath and caring for the wounded, and a plan for how to prevent such a situation arising again:

Would it not be possible, in time of peace and quiet, to form relief societies for the purpose of having care given to the wounded in wartime by zealous, devoted and thoroughly qualified volunteers?

The book was a sensation, read by all the movers and shakers of European society and translated into many languages. Dunant became famous and received invitations from various heads of state.

One man who read the book was Gustave Moynier, chairman of the Geneva Public Welfare Society. In 1863 he presented the book to his group and they established a committee to see what could be done. This was known as the Committee of Five, after the number of its members: Dunant, Moynier, Dr Théodore Maunoir, General Guillaume-Henri Dufour and Dr Louis Appia.

On 26 August, 1863, the committee convened a conference of 36 delegates of various governments and organisations and even some private individuals. The committee had prepared a draft convention and discussions took place on this basis. The convention ended with the adoption of ten resolutions which provided for societies to be established in various countries, reporting back to a central committee – now the International Committee of the Red Cross.

The resolutions did not, however, have the force of law. To solve this, the Swiss government organised another conference in Geneva. This took place in 1864 and on 22 August of that year, the delegates from 16 states signed the first Geneva Convention, the somewhat less than snappily titled Geneva Convention for the Amelioration of the Condition of the Wounded in Armies in the Field. This established such now-accepted principles as the neutrality of medical staff and the identifying mark of a red cross on a white background.

From Riches To Rags

A few years later, Dunant was heavily in debt and in 1867 he was declared bankrupt. He resigned from the committee and left Geneva. During the next two decades he travelled around Europe, continuing to discuss and promote his ideas and trying to extend them, such as a conference to discuss the treatment of prisoners of war. As time passed, however, he dropped out of public consciousness.

In 1887 he found himself stuck in the Swiss town of Heiden where he was to stay for the rest of his life. In 1895 a Swiss journalist named Georg Baumberger found out Dunant was in Heiden and wrote an article about him which was quickly reprinted across the continent, reviving his fame and prestige. In 1901 Dunant was a joint recipient1 of the very first Nobel Peace Prize. The Nobel committee referred to his work founding the Red Cross as 'the supreme humanitarian achievement of the 19th Century'.

Henry Dunant died in 1910 in the Heiden nursing home where he had been living since 1892. Interestingly though, 34 years later that very same building was the birthplace for Jakob Kellenberger, who at the time of writing (2010) is the president of the International Committee of the Red Cross. The building now houses the Henry Dunant Museum.

Heiden spent 2010, the 100th anniversary of Dunant's death, honouring their most famous former resident with exhibitions and the like, but perhaps the greatest legacy of Henry Dunant is the existence of the Red Cross and Red Crescent, which help 200 million people in need every year.

1With Frédéric Passy, a leading pacifist.