How to Start a Riot by Radio: Father Knox and the BBC Panic of 1926 Content from the guide to life, the universe and everything 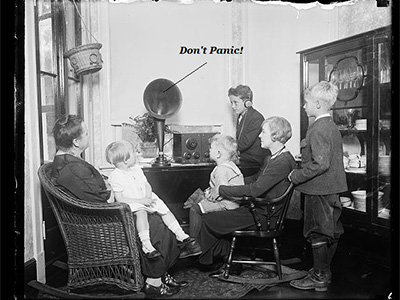 Who invented the radio fake news hoax? What's that you say? Orson Welles with the 1938 The War of the Worlds scare that had all of New Jersey running for cover1? You'd be off by a dozen years. The true originator of the radio hoax panic was a British clergyman, Father Ronald Arbuthnot Knox. His sense of humour caused quite a stir on the BBC one night in 1926.

Father Knox and His Sense of Humour

It is so depressing that my one permanent achievement is to have started a bad joke.
– Ronald Arbuthnot Knox, referring to his undeserved reputation as a Sherlock Holmes 'scholar'.

Father Knox had a sense of humour, and apparently needed one, because he was also stubborn in his beliefs. Stubborn enough to defy his Anglican bishop father and become a Roman Catholic. Knox came from a literate and religious family: one of his brothers was editor of Punch. Another was an Anglican monk. A third worked as a codebreaker at Bletchley Park.

In addition to translating the Bible, Father Knox wrote detective stories, and devised 'rules' for detective fiction. He also wrote satirical articles of literary criticism. In one, he 'proved' that Tennyson's poem In Memoriam was actually written by Queen Victoria. Another article, 'Studies in the Literature of Sherlock Holmes', was really meant to attack a certain kind of Bible scholarship; instead, it started the trend of analysing the fictional character as if he had really existed, and trying to resolve continuity errors in Dr Doyle's plots. Unfortunately, some people took him seriously – including Arthur Conan Doyle, who wrote a four-page rebuttal.

Unemployed demonstration in London. The crowd has now passed along Whitehall and... is preparing to demolish the Houses of Parliament with trench mortars. [...] The clock tower, 320 feet in height, has just fallen to the ground, together with the famous clock Big Ben, which used to strike the hours on a bell weighing nine tons.
– 'Broadcasting the Barricades', 16 January, 1926

It was 7.40pm on Sunday evening. Father Knox took the microphone, pretending to be in London, though he was really at a BBC station in Edinburgh. First, he imitated an elderly clergyman with a pronounced lisp lecturing on 'Gway'th Elegy'. There followed brief news items, such as the Test Match scores, 'Australia 569 for seven wickets. The English team, it will be remembered, was all out for 173.' After a few more items of like seriousness, he began relating an ongoing event (he said): a violent riot in Trafalgar Square. In between bulletins regarding the riot, there was dance music, allegedly from the Savoy Hotel band, as well as weather reports.

Apparently, the rioters have sacked the National Gallery and aren't finished yet. They move on, attacking the Houses of Parliament with trench mortars – and 'throwing empty bottles at the water-fowl' in St James's Park. Big Ben3 falls victim. It is announced that, following the collapse of Big Ben in the riots, the time will be given from Edinburgh by 'Uncle Leslie's repeating watch.' In between news bulletins of an increasingly ludicrous nature, the Savoy Hotel band plays on... until the Savoy is blown up. Then the crowd hangs Mr Wurtherspoon, the 'minister of traffic', from a lamppost. Correction: it was a tramway post. (The BBC strives for accuracy here.) Sir Theophilus Gooch, who was on his way to the BBC to deliver a lecture on Housing of the Poor, has been roasted alive by the insurgents in Trafalgar Square. Finally, the crowd invades BBC headquarters... and sits down to read the Radio Times in the waiting-room. The report ends, replaced by assorted music (not, presumably, by the Savoy orchestra).

One could describe this broadcast as less of a hoax than a substandard Monty Python sketch. But radio was a new medium, and new media tend to be attended by unintended phenomena. In other words, this broadcast caused massive concern among the British radio-listening populace.

The Savoy Hotel got telephone calls from alarmed people – over 200 local calls, as well as worried out-of-towners who wanted to know if they should cancel their reservations. Newspapers were bombarded with calls. The Admiralty heard from an angry public demanding that they take a battleship up the Thames to deal with the violence4. People fainted. The mayor of Newcastle was called away from an official dinner to defend his city.

One reason people panicked was that it was snowing. The evening newspapers arrived late, or not at all. They had no way to check that this story wasn't really happening. Well, except for common sense, which is always in short supply. When the story broke on Monday, and everyone found out that such bastions of England as Big Ben and the Savoy Hotel were still standing, there was relief – and anger at the BBC.

Father Knox was surprised. He intended his radio sketch as a satire on the BBC's method of reporting the news. For example, the BBC really wanted to educate the listeners5. Knox said this:

The building is made of magnesian limestone from Yorkshire, a material which is unfortunately liable to rapid decay. At present, in any case, it is being demolished with trench mortars.

In addition, Knox made sure to repeat all information in different sentence structures, as the BBC did for purposes of improving the public's grammar and understanding. The BBC was very pedagogically minded.

The educational point that was made on this occasion was slightly different from that intended.

Did this programme influence Mr Orson Welles in his creation of The War of the Worlds? Various answers have been given, but... probably not. Welles didn't intend to cause a panic, any more than Father Knox did. They merely wanted to entertain by adding what WS Gilbert would have called 'corroborative detail, intended to give artistic verisimilitude to an otherwise bald and unconvincing narrative.'

Did the BBC learn anything? Apparently not. They kept talking like that. (And let Monty Python make fun of them for it on television.)

h2g2 Researcher from the United States, on watching a BBC news broadcast for the first time in 1978:
They really talk like that! I thought it was just a Monty Python joke!

Want to read the full script? You're in luck. Go to archive.org's copy of Fr Knox's book Essays in Satire. (Login required, but it's free.)

1Well, part of it, anyway. Recent research indicates that the panic may have been overestimated for publicity purposes.2The Anglican Archbishop of Canterbury, Rowan Williams, praised the Knox Bible by saying that it 'gives the scriptural text a fresh flavour, often with a brilliantly idiosyncratic turn of phrase.' Whether brilliantly idiosyncratic turns of phrase are desirable in a Bible translation could be debated, but there it is. Baronius Press, which publishes the Knox Bible, claims, 'He wanted a Bible that did not merely translate the original but made it read as if an Englishman had written it.' 3The radio play failed to mention further interesting facts, such as that though the tower and clock are nicknamed 'Big Ben', officially that is the name of the largest bell in the Palace of Westminster's Clock Tower. In 2012 the Clock Tower was officially renamed the Elizabeth Tower to commemorate Queen Elizabeth II's Diamond Jubilee.4If this sounds weird, please remember that in 1916, the British Admiralty had used a gunboat in the Liffey to shell occupied buildings in Dublin during the Easter Rising.5Since 1923 the BBC's mission statement has been to inform, educate and entertain – in that order.