Orson Welles - Theatre and Radio Content from the guide to life, the universe and everything 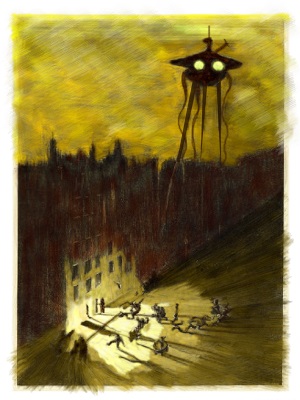 The word 'genius' was whispered into my ear the first thing I ever heard while I was still mewling in my crib, so it never occurred to me that I wasn't, until middle age!
- Orson Welles

George Orson Welles was born in 1915 in Kenosha, Wisconsin, USA, the second of two children, and died of a heart attack in 1985 in Spain. This entry is concerned primarily with what happened between those two events.

His father, Richard Head Welles, was involved in carriage design for early automobiles, and his mother, Beatrice, was a local beauty. Young Orson's upbringing was therefore comparatively privileged. Despite this, it was not a happy childhood; his elder brother was institutionalised and his father was an alcoholic, which led to his parents divorcing. Both were dead by the time Welles was 16.

After his father's death, Welles and his mother moved to Chicago with a Dr Bernstein, a paediatrician whose eye she had caught. He was to remain a significant part of Orson's life for long after Beatrice Welles' death.

Welles became a professional actor, producer, writer and director, and a well-known socialite and raconteur. He was married several times, to actresses Virginia Nicholson, Rita Hayworth and Paola Mori (the Countess di Girfalco), and had a long-term relationship with Oja Kodar. Although he will always be remembered for directing, aged just 26, what is possibly the greatest film of all time - Citizen Kane - he produced many other worthwhile works, not all of them on-screen. Throughout his life he was involved in acting, producing, writing and directing for stage, screen and radio. By the time of his death he was regarded as one of the great film directors, yet he spent most of his life struggling to raise funds for his next project.

Welles' early childhood was replete with examples of artistic ability. For example, he first appeared on stage aged three in Madame Butterfly, and wrote, produced and directed a version of Dr Jekyll and Mr Hyde at age ten. By age 11 he was being described in local papers (possibly due to Bernstein's influence) as a cartoonist and a poet. He toured Ireland to paint at 16, again at the suggestion of Bernstein, but instead found work in the theatre. He would later visit France, Britain, Germany, Italy, Spain and Shanghai (China).

His first professional stage role was as The Duke in Jew Süss at the Gate Theatre in Dublin. Although this was a success, his next few roles were not (though they gave him a chance to try directing a professional play for the first time with The Circle). Disappointed, he decided to try his luck in England, but after being refused a work visa he returned to the US. By 18 he was acting on stage, and by 19 had appeared on Broadway, moving into producing and directing. He first appeared on radio in 1935, at first as a sideline to his stage work. His undoubted artistic ability was backed up by a flair for publicity: he first became critically acclaimed for his adaptation of an all-black version of Shakespeare's Macbeth in which Haitian voodoo replaced the usual Scottish witchcraft.

After cutting his teeth as an actor on this bewildering array of roles, Welles used the success of The Cradle Will Rock by the Federal Theatre Project to set up (along with John Houseman) his own theatre company in 1937. The Cradle Will Rock was another controversial success for the young Welles, its first performance having been banned due to its left-wing content. This resulted in the cast decamping to another theatre where, to avoid actors' union regulations, they were officially classed as part of the audience and performed the entire play in the aisles.

Using many of the same actors, especially Agnes Moorhead and Joseph Cotton, Welles set up the Mercury Theatre Company. Their first production was an adaption of Shakespeare's Julius Caesar set in Fascist Italy (which was the then political situation in 1937). Vincent Price was briefly a member, though this was probably a publicity coup on Welles' part. Radio proved to be another forte of Welles', with a regular programme called The Mercury Theatre on the Air achieving great critical success. It was kept as a 'prestige' programme for the networks (CBS and CBC), although audience ratings remained low. This period, culminating in his first film deal, perhaps marked Welles' zenith in terms of creative freedom.

After the notoriety provided by the War of the Worlds broadcast (see below), the Campbell Soup Company took over the radio show, changing its title to The Campbell Playhouse and providing the budget for weekly A-list guest stars, but otherwise leaving it unchanged.

When Welles was offered a film contract, the writing was on the wall for the radio show. Welles was reluctant at first, but the generosity of what he was offered in terms of both money and artistic freedom (though not as great as the studio claimed in its publicity) eventually tempted him. At first Welles commuted across the country to work on his film project on the west coast and his radio shows on the east, studying his radio scripts en route (and winning an award from TWA, the airline, as their best customer, with 311,425 air miles in one year). Then the whole production moved to Hollywood. Finally Welles left and the radio shows, although lasting a year without him, inevitably ceased.

For 30 years people have been asking me how I reconcile X with Y! The truthful answer is that I don't. Everything about me is a contradiction and so is everything about everybody else. We are made out of oppositions; we live between two poles. There is a Philistine and an aesthete in all of us, and a murderer and a saint. You don't reconcile the poles. You just recognise them.
- Orson Welles

Orson Welles was actively involved as writer, actor and director in over one hundred radio productions. Some of the radio actors who participated in Welles' Mercury Theatre radio and theatrical productions were to appear later in his most famous films.

Welles' first major radio role was the lead in the mystery thriller series The Shadow. This was another major step in his seemingly inexorable progress towards becoming a national celebrity, but it was The War of the Worlds that would make him notorious. The composer Bernard Herrmann (later famous for his music for Hitchcock film classics such as Psycho) provided the music for several of these shows.

The War of the Worlds

The War of the Worlds radio broadcast has come to be regarded as one of the great hoaxes of the 20th Century. It was an adaptation of HG Wells' (no relation) classic science fiction story of an alien invasion. Orson Welles updated the setting and transferred it to the USA (where it was broadcast on 30 October, 1938), but he presented it in the style of a music programme being interrupted by news bulletins.

He would later claim that no deception had been intended. Indeed several announcements were made during the show that this was a fictional broadcast; and it went out in the usual Mercury Theatre time-slot. Yet many listeners were panicked into believing that their country was being attacked. At the time it was estimated that out of six million listeners more than one million prepared to leave their homes, or ran into the streets in panic. More recent research suggests that the true number was a fraction of that. Nevertheless, the media hype at the time created the effect that Welles must have hoped for. His name was known throughout America and beyond, and his version of The War of the Worlds became one of the most famous broadcasts of all time.