Bletchley Park, Milton Keynes, UK Content from the guide to life, the universe and everything 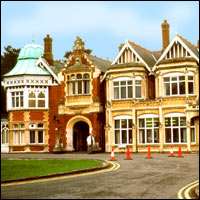 Bletchley Park was made world-famous by the film Enigma1, which finally brought the work of the British code-breakers during WW2 into the limelight. However, there is more to this stately home and grounds than just Alan Turing and an Enigma machine.

Herbert Samuel Leon2 bought 300 acres of land right next to a railway line in 1883, and developed 60 of those acres into his country estate. Right in the middle of this estate he built a grand manor house, perfect for entertaining all his rich London friends, and for influencing powerful politicians.

After the deaths of Leon and his wife, the estate became the property of Captain Hubert Faulkner, a property developer, who had a plan to knock down the manor house and sell off the land as housing estates. However, the British Government was to put a stop to this plan.

In 1938, Hitler was working his way through Europe, invading first Austria, then Czechoslovakia. It was obvious that war was on its way. The London-based Government Code and Cipher School3 (GC&CS) needed to move to a more discrete location where they could work without fear of bombing raids. Bletchley Park, being situated on the junction between the Oxford to Cambridge railway4 and the London Euston to Glasgow line, close to major road links and with teleprinter connections to the rest of the country, was a perfect site. The estate was denoted Station X, it being the tenth such site that MI65 had acquired in the run-up to World War II.

The first wave of code breakers arrived at Bletchley in 1939 and took up their stations in a series of huts around the grounds. They were billeted6 in surrounding villages and many had to cycle for miles to get to and from work each day. Their work wasn't easy and the conditions were often terrible - the huts had very rudimentary heating and, in the winter, it wasn't unusual to see men and women wrapped up in coats and blankets while they worked. On the other hand, those who worked with the huge code-breaking machines had to work in sweltering heat with poor ventilation.

All the work at Bletchley Park was top-secret - the government couldn't risk the enemy finding out how good the British were at breaking their codes. In fact, it is only in recent years that former Bletchley Park workers have felt free to talk about the vital role they played in the war effort.

Probably the most important part played by those at Bletchley Park during the war was the breaking of the Enigma codes. Enigma was first cracked in Poland (with the help of information from French spies) in 1932 but, as Germany threatened, they passed on their information to France and Britain which aided the British code-breakers in deciphering the messages from the new, improved Enigma machines. The first British breakthrough came in 1940, helped by two main facts:

Huts 3, 6, 4 and 8 were the ones that worked on Enigma, helped by Alan Turing's breakthrough - the Bombe - an electro-mechanical machine whose role was to find the scrambler settings for a particular Enigma-encoded message much quicker than any human. Soon the code-breakers at Station X were reading so many German messages that many had to be ignored, so the enemy wouldn't realise that Britain had cracked their code9.

Of course, Enigma wasn't the only code broken at Bletchley Park - the cryptanalysts there also worked on codes including the German 'weather codes' (codes used to transmit weather information to their navy), and German diplomatic codes, all of which were hugely important to the war effort.

Once peace was declared, code-breaking became less vital. Every piece of evidence pointing to the successes at Bletchley Park was destroyed, on Churchill's orders, as the Cold War had begun and it was important that the USSR had no idea how much Station X had achieved10. Enigma machines had also been distributed to former British colonies, who would have thought that the code was still unbreakable. The Bletchley Park workers disbanded, some continuing to break codes for the Government Communications Headquarters (GCHQ), but others going back to their pre-war lives. The truth about Station X only started to come out in the mid-1970s, and there are still things that remain secret that the public may never be told.

In 1991, almost all evidence of Bletchley Park's wartime role had disappeared and plans were again afoot to demolish all the buildings and sell off the land for housing developments. Due to the secrecy surrounding the code-breaking at Station X, nobody knew just how important the site had been. However, the public was slowly becoming more aware of what had happened there and the Bletchley Park Trust was formed on 13 February, 1992. The trust rented the land from the government's land agency and British Telecom and first opened the site to visitors in 1993.

Nowadays, Bletchley Park is a museum devoted not only to the role of Station X in the war, but also to other aspects of wartime life. Some of the original code-breaking huts are still standing, containing exhibits about the Bombe and Colossus11 machines. Information about the role of carrier pigeons in war can be found in the old stable-yard of the manor and a collection of classic cars can also be seen. There are also exhibitions on Churchill, toys through the ages, and the history of computing, along with a re-creation of a wartime post office. All this is set in beautiful grounds, from where fly-pasts of World War II planes can sometimes be seen.

Of course, the code-breakers of Bletchley couldn't have cracked Enigma without a working example of the machine and said machine is still the property of Bletchley Park. In 2000 this machine made the headlines as it was stolen from Bletchley Park and, as one of only three still in existence, it was considered a vital historical artefact. It was returned in good condition, however, and now can be seen by all visitors to Bletchley Park.

Admission to the site is reasonable12 and the price includes a highly informative tour of the site. There is plenty for adults and children to see and do, and shopaholics will love the souvenirs available in the shop. All in all, it is a great family day out.

1Based on a novel of the same name by Robert Harris.2A wealthy financier from London.3Now GCHQ.4Which handily linked the two major universities of Oxford and Cambridge, and so supplied a ready source of clever people who may well be good at cryptography.5The British Secret Intelligence Service working in foreign intelligence and security.6Being billeted means being assigned to lodgings, often a spare room in someone's house.7For example, if T appeared in the original message, it couldn't be a T in the coded message.8There was supposed to be an element of randomness in the setting of the code, but German operators tended to use their girlfriend's initials or some other predictable sequence of letters.9For example, if every attack on shipping convoys was avoided, the Germans would soon have realised that someone was cracking their code and so they would have developed a better one. The government had to let many German raids go ahead in order that they would think their messages were still secure.10Because if the USSR knew that Britain had made so much progress with German codes, they would have been much more careful with their own.11The world's first semi-programmable computer, Colossus was a machine built by Tommy Flowers, to crack another German World War II cipher - the Lorenz cipher. There is currently an on-going project at Bletchley Park to re-build a Colossus, which isn't easy as all the plans were destroyed after the war.12All WW2 veterans are admitted free of charge.