Bearded Tits - Misnamed Birds Content from the guide to life, the universe and everything 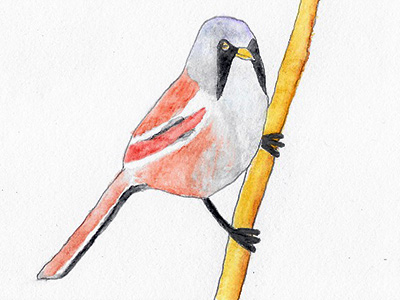 Bearded Tits are misnamed birds, being neither bearded nor tits. The facial markings that give them their name could be more realistically described as a moustache, as they are black triangles on either side of the male bird's beak, rather than markings under the beak that the term 'beard' might suggest. This species (Panurus biarmicus) is the only known member of the panuridae family, whereas the tits belong to the paridae family. The international name for the Bearded Tit is Bearded Reedling, which is more apt since these birds make their homes in reedbeds.

These birds can be found across Europe and Central Asia. The global population is estimated to be at least three million, so they have been classed as Least Concern on the International Union for Conservation of Nature’s Red List. However, their reedbed habitat is at risk, eg from marsh drainage programmes, so conservation efforts include the creation of nature reserves and the installation of tipi-like bundles of reeds to help the birds with nesting.

These birds are about the same size as house sparrows, but with a longer tail. Their bodies are buff-coloured, and their wing feathers are orange, black and white. Females have a brown head, while the males have a grey head plus the black 'moustache'. They are well camouflaged among the reeds when feeding on reed seeds, but you might hear them twittering or calling with a 'ping' sound.

Reed seeds are their main food in winter, but in summer these birds will eat spiders, snails and insects. They do not migrate but, if local food is scarce in autumn, pairs or groups may travel (eg from the Netherlands to the British Isles) to find a better place to spend the winter.

Bearded Tits build their nests at the base of reeds, using reed leaves and the fluffy reed flowers. The female lays up to eight eggs. Both parents take turns incubating the eggs and finding food. The eggs hatch after about two weeks. The fledglings leave the nest about two weeks after they hatched. They are fed by their parents for a further week, and become independent when they are about a month old. A pair of Bearded Tits may have up to three clutches of eggs in a season. The oldest Bearded Tit known to the Royal Society for the Protection of Birds (RSPB) was seven years old.

In the UK, Bearded Tits are most often found on the east coast, around East Anglia in England and in part of Scotland. However, they are also visitors to nature reserves including Titchfield Haven on the south coast and Burton Mere in the north west.