Why John L Burns Has a Statue in Gettysburg Content from the guide to life, the universe and everything 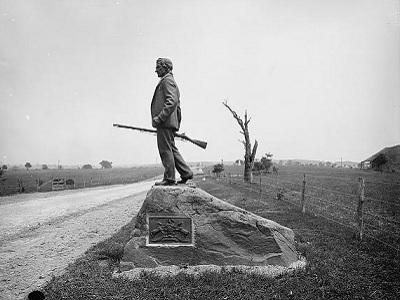 The gentleman's name was John L Burns (1793-1872). His backyard happened to be in Gettysburg, Pennsylvania, in the year 1863. There was a war on – the American Civil War. John L Burns knew this, because he'd been out in it.

Burns had been in two other wars: the War of 1812, where he fought at Niagara Falls, and the Mexican-American War (1846-47). He'd tried to enlist in the Union Army during this war, but they rejected him on the basis that, at 69, he should have better things to do. For a while, he worked with the army as a teamster (driver of animal teams), but they sent him home to Gettysburg. Burns wasn't ready to sit down yet: he became the local constable. This was a part-time job, as Gettysburg wasn't a high-crime area. Burns was also a cobbler.

His job as constable was why he resisted the Confederates when they showed up on 26 June. They were breaking the law by occupying the town, which wasn't theirs to occupy. So Confederate General Jubal A Early locked Burns up in his own jail. This didn't last, as the Confederates left town the next day. Burns arrested any stragglers he found. This was a probably a good thing, because besides burning down an iron furnace, several railroad cars, and a covered bridge, the rampaging Confederates were seizing any African Americans they could find, escaped slaves or freeborn Pennsylvanians, they didn't care, and shipping them southward to be sold into slavery. John L Burns was a busy man. And then came 1 July, and a major battle. 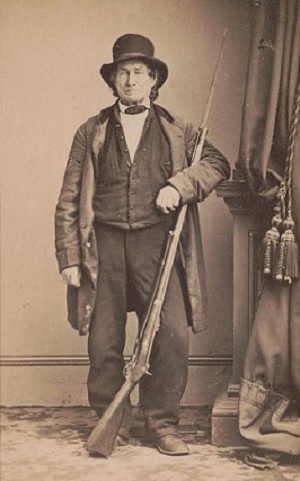 Burns knew what to do: he grabbed his ancient flintlock musket and powder horn and headed for the battle. He didn't have a uniform, so he wore his best clothes: ancient top hat and a blue swallow-tailed coat, suitable for downtown strolling about 40 years before. By the time he got to the battle, Burns had somehow traded in the flintlock for an Enfield rifle and cartridges. He reported for duty.

The Union Army was a bit sceptical, but they sent him to the woods to keep him out of the way. He set to sharpshooting and allegedly shot three Rebs. Unfortunately, he was also hit three times himself. Left for dead, he lay on the field until the next day, when Confederates found him and patched him up. He told them a cover story to explain what he was doing on the battlefield – accounts vary, as the story has been mythologised quite a bit. Somehow he managed to get back to the Union side the next day, and was soon recovering at home.

With a total of over 50,000 casualties, Gettysburg was the bloodiest battle of a very bloody war1. In the fall, Abraham Lincoln came to Gettysburg for the dedication of the battlefield as a memorial. He delivered a speech for the ages. He made sure to meet John L Burns. In 1865, Burns went to Washington and met Lincoln again. Burns was a celebrity: Bret Harte wrote a poem about him, which probably pleased him, since he claimed to be related to Robert Burns.

John Burns died in 1872. A Pennsylvania chapter of the Sons of Union Veterans commissioned a statue by sculptor Albert George Bureau, which was erected on 1 July, 1903, the 40th anniversary of the battle. The statue stands west of Gettysburg on Stone Avenue south of Chambersburg Road.

It is true that statues don't teach history. They tell you who someone admired. It's obvious that the story of Burns' involvement in the famous battle has been polished a lot in the telling over the years, remembered 'with advantages', as Shakespeare said2. But Bret Harte may have put his finger on why the Sons of Union Veterans wanted to put this gentleman on a statue. It was because of what he represented in the short history of the United States: a link between the citizens of the early republic and the ones now fighting over its survival.

Until, as they gazed, there crept an awe
Through the ranks in whispers, and some men saw,
In the antique vestments and long white hair,
The Past of the Nation in battle there…

1The American Civil War was the second-deadliest civil war taking place at the time, behind only China's Taiping Rebellion (1850-64). Meaning 'Great Peace War' this cost the lives of over 20 million.2Henry V.