Slime Moulds - Puzzle-solving Organisms Content from the guide to life, the universe and everything 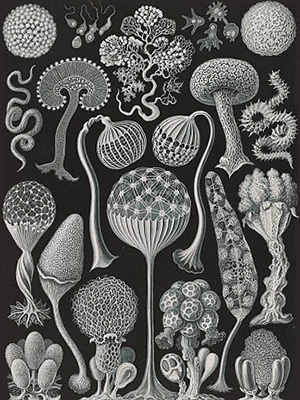 Slime moulds can roughly be described as groups of amoebas that behave like fungi and look like slime or mould covering surfaces such as dead wood. Hundreds of different types have been discovered around the world. Particular interest in these organisms began in the 19th Century, as specimens were harvested alongside moss and lichen and catalogued in natural history collections. However, there is still more to learn about slime moulds and their behaviour - research has continued into the 21st Century.

Originally slime moulds were thought to be fungi, as they reproduce from spores that are formed inside mushroom-shaped 'sporangia'. However, later research found that, rather than simply growing into new slime moulds, the spores hatch into 'myxamoebae' - amoeba-like cells that can feed, move around, and reproduce by splitting in two, but which only contain half the number of chromosomes of the parent slime mould. New slime mould is formed when two myxamoebae with compatible genes meet and merge together (like sperm fertilising an egg, except myxamoebae are the same size and shape as each other). Slime moulds consume bacteria and other particles on moist surfaces such as tree bark, algae, dead plants and even rabbit poo.

Some types of slime mould are harmful to the surface they inhabit - for example, Plasmodiophora brassicae that is the cause of clubroot disease in cabbages. However, most slime moulds, including Mucilago crustacea (which forms clusters of tiny yellow blobs on lawn grass) and Licea eleanorae (named after Eleanor Ing, the wife of slime mould collector Bruce1) are nothing to worry about (unlike the (fungus) moulds whose spores may exacerbate lung conditions such as asthma).

The protostelid and dictyostelid types of slime mould are too small to see with the naked eye, but members of the Myxomycetes grouping ('true slime moulds', or 'plasmodial slime moulds') grow into visible clumps or patches.

A distinctive slime mould that can be found in many places around the world is Fuligo septica, which is known as Scrambled Egg Slime because of its bright yellow and textured appearance. Lycogala epidendrum, also known as Wolf's Milk Fungus, is another notable example - its sporangia are a pink colour at first, and they contain pink fluid. As the sporangia dry out, they turn grey, and then the spores are released. Physarum polycephalum, which looks like yellow cobwebs, is often used in research because it is easy to cultivate in a laboratory.

Physarum polycephalum can find food hidden in a maze, and can find the shortest path between two pieces of food by testing different routes and leaving a chemical trail behind so it knows where it has been. The process of testing different routes also allows it to get used to substances that it is repelled by but which do not kill it, such as quinine or salt - research in 2016 found that Physarum polycephalum was able to cross a bridge covered with quinine to get to some oats - it took about four hours on the first day, but only about two hours after five days, when it had become more accustomed to the quinine. Later research investigated how the slime mould could learn by being merged with other slime moulds of the same species that had been tested in different ways.

You can try cultivating your own slime mould. First take some dead leaves or rotting twigs and put them in a plastic storage container lined with a damp paper towel. Put the lid on, then put the container in a dark place and check it regularly - after a few days or weeks, you may see some slime mould appear. If the slime mould dries out, or is exposed to too much light, then it will form sporangia and release spores (and the parent slime mould will die). If the food supply runs out, the slime mould will try to escape from the container to look for more. Given the right conditions, your slime mould should thrive so you can even give it mazes and other puzzles to play with.