Moss and Lichen - a Guide for Gardeners Content from the guide to life, the universe and everything 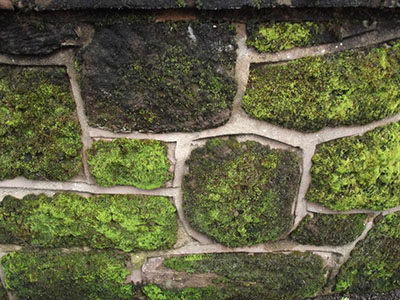 Moss and Lichen are not the most obvious beauties in a garden, but they can be very rewarding both at a distance and when you study them up close.

Mosses are part of the Bryophyte family – they are plant-like as they gain energy via photosynthesis and they have green leaves, although their leaves often only have the width of a single cell. As the leaves are so tiny, they easily dry out when water is not available, but mosses have mostly adapted to survive in such conditions. As a result, there are three basic phases in the life of a moss:

There are around 600 species of moss. Some grow on rocks, some on trees, some amongst grass. Some prefer north facing, darker conditions, but others like a damp and sunny spot1. Some form mounds, while others form carpets of long strands, and they may be one of many shades of green.

When gardeners think of moss, the stuff that grows in lawns might be the first thing they think of. This is Brachythecium, and it prefers a shady location. Sphagnum moss is another well-known type, as it is used as a medium for growing plants in hanging baskets.

Dicranoweisia cirrata is the type that is a mound like a small green furry creature, and is often found on roofs – it goes green when it rains, but turns a dark brown colour in dry spells. Mosses are difficult to tell apart, and some can only be classified under a microscope or in a lab – for example there is another moss, Dicranoweisia crispula, that is very similar to Dicranoweisia cirrata when seen with the naked eye, but it has leaves that are flat-edged rather than curved. Both types enjoy high altitude.

Bryum is the moss that grows on the ground between paving slabs and blocks – it likes a sunny site and can generally be found in exposed places.

Leptobryum is a very tiny carpet-forming moss, so people often use it in Bonsai pots to replicate grass beneath the miniature-scale tree.

Brachytheciastrum velutinum is known as velvet feather moss, and is a pale green moss with feathery strands. Grimmia is a fluffy blue-green mound moss whose leaf colour contrasts with the yellow of its spore-bearing pods.

Liverworts are also Bryophytes, so they have a leaf phase and a fruiting phase. However, unlike mosses, they can be thugs in the garden. In particular, Marchantia polymorpha is the type that can often be found in plant pots. If it covers the surface of the pot with its broad, glossy leaves, it prevents water getting to the roots of the plant in the pot – remove these liverworts if you see them. 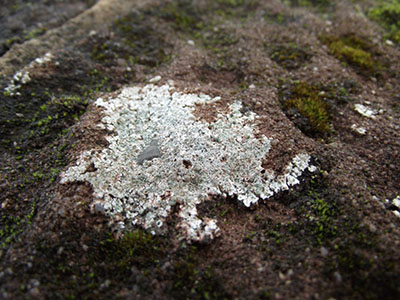 Lichen is not a Bryophyte, but instead consists of fungi and algae in a symbiotic relationship - the algae carry out the photosynthesis, while the fungi provide nutrients and water. Lichens are also often difficult to tell apart as there are about 15,000 different types and many of them are very similar in colour and habit.

There are a huge variety of colours and textures of lichen. Main types include: crusty, flaky, leafy, hairy, jelly and shrubby. Many are blue-grey, but there are also green and brown types, and you may even see bright yellows and reds.

Buellia is the crusty type you may see growing in grey-green patches on walls. Leafy grey lichen growing on twigs may be something like Parmotrema, and the dusty yellow lichen on twigs may be Cetraria. Hairy lichens such as Usnea may be found dangling from the branches of trees.

Now let's zoom out and look at moss on a larger scale in gardens.

Moss gardening is particularly popular in Japan. For example, in Kyoto the Saihoji Temple and Gioji Temple have water running through them and plenty of shade provided by large trees, which allows lush moss carpets to grow. Tofukuji Temple includes much more use of texture to create a less naturalistic effect. For example, in one area square blocks of non-porous stone have been laid amongst blocks of porous stone, so the moss has colonised the ground in a geometric way rather than in a carpet or smooth mound. In another area moss has been used to cover shaped islands within a raked gravel Zen garden.

The Bloedel Reserve in Washington, USA, contains a Japanese-style garden with a tapestry of mosses in squares (some of them doing better than others). Mosses there also took a liking to the stones in the Zen garden.

The Villa d'Este Hundred Fountains water garden in Rome, Italy, provides an ideal habitat for mosses to cascade down walls (the faces of the water-spouting gargoyles are deliberately kept clean to retain a sculptural effect amongst the vegetation).

The moss garden in Savill Gardens, London, UK, proved that mosses do well when the situation is to their liking, but their ecosystem is quite fragile – in the Great Storm of 1987 many of the trees in the garden were knocked down, letting more light into the area where the mosses grew and removing the shelter that they had previously enjoyed. Soon the moss carpet died out, with only patches remaining. A picture of the carpet in its prime can be seen in the book Moss Gardening by George Schenk2

Bodnant Garden near Conwy in Wales is quite famous for its moss – in particular there is a house with a moss-covered roof. In Exbury Botanic Garden in Hampshire, Sphagnum moss has been used to fill wire frameworks to create natural-looking sculptures of animals such as a stag. Dunham Massey in Cheshire has a well-known moss garden that was created from what was intended to be a flower garden - when the trees around the edge of it grew up and made the area more shady than expected, the moss arrived. Instead of trying to do battle with the elements to eliminate the moss and force other plants to grow, the gardeners went along with nature and cultivated it so that the mosses that liked it there could thrive.

Mosses in Your Garden

Moss gardening is even more possible on a small scale than on the grand scales of temples and botanic gardens. For example, if you have a bad patch of moss in your lawn in a shady spot, rather than spending huge efforts trying to eliminate the moss and persuade the grass to grow, why not weed out the grass and cultivate the moss instead?! If you don't like Brachythecium, there are some other types of mosses which form carpets that cover large areas quite well, if the conditions are right for it, such as Didymodon and Barbula. However, moss is a good growing medium for flowering plants so if you want a moss carpet in a place where grass is not keen on growing, then you will need to do some weeding.

Sandstone is an excellent medium for growing moss, as it is porous, so the shallow roots of the tiny plants can get enough of a hold to grow and flourish. You are likely to find a good number of mosses (and lichens) on sandstone walls. You can often see mosses decorating the plinth of statues. Stone troughs or pots are often colonised by mosses and lichens, and moss may cover the surface of the soil around a pot plant, providing protection against water loss on a warm day.

How to Grow Your Own Moss

There are no rules about what container to use to grow your own moss in - you can choose a plastic or terracotta pot, or something more exotic like a seashell, log, stone (or even a shoe or a bicycle seat!) – it doesn't need to be deep as the mosses are only shallow rooted. Make sure there is drainage, such as a hole in the base of a pot, or a channel on a rock.

Shade-loving mosses like 2-3 inches (5-7cm) of soil, but sun lovers can grow in as little as 1 inch (2½cm). You can add water-retaining gel or crystals to ensure the plants stay moist enough to give you a good long display of colour through the year.

To add moss to your display you can either use the Zen method and just be patient – keep the pot in your desired position (sun or shade) and keep it moist, and wait for the mosses to find it. Or you can take a sample of your favourite moss and add it to the pot – it may start growing itself, or it may distribute some spores that will then grow into moss in your container.

Slugs and snails don't like moss, so that won't be a problem for you. It is true that moss on the roof of your house is a sign of clean air – to ensure your moss pot flourishes, keep it away from car fumes and other air pollution. Humans are the biggest threat to moss, as if it is in a pot with a plant, then people might dig out the moss and leave the plant, rather than enjoying the moss and the plant, or the moss on its own. Also, treading on a moss patch won't do it any good.

Winter (particularly a damp and relatively mild season) is an especially good time for moss-spotting, as the mosses are in full leaf. Also the bigger plants in your garden aren't bursting forth, so the small plants make more of a green impression on brown earth or on bare branches of trees – go forth and find moss!

1So that means you can't rely on the old adage about moss facing north if you are trying to get your bearings without the aid of a compass.2Moss Gardening: Including Lichens, Liverworts and Other Miniatures, Timber Press, 1997.