Gin and Tonic Content from the guide to life, the universe and everything 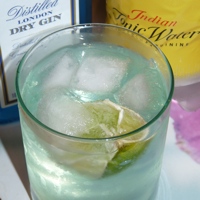 Has a gin and tonic ever saved you from one of those close afternoons that clings wherever you hide, refreshing your muggy brain from the inside? If it has, you will understand the appeal of this grand old drink to cricket players, especially those who have ventured onto the sub-continent's parched ovals, and may find points of interest in the words that follow. If, however, your preference is for the sticky charms of rum and coke or similar commercial inventions, this entry may be too austere for you.

Aspersions have been cast upon gin ever since the secret of its inexpensive manufacture became known in Britain about 200 years ago, advancing its popularity with the lower classes and simultaneously drawing moral indignation from their social superiors. Being blind on expensive claret and brandy was apparently a more civilised inebriation in Georgian London than to be drunk on gin, giving rise to a number of derogatory gin-isms that continue to undermine the true nature of this brave spirit.

The best-known survivor among these is 'mother's ruin', a term that came from British soldiers' taste for gin while on leave, and the maternal state this induced in those women who shared their off-duty conviviality. Yet from these rather shabby origins has come one of civilisation's finest creations, a drink that could just be the best cooler ever - gin and tonic.

British Tommies'1 love of gin made it the perfect antidote to the bitter-tasting extract from the bark of the Cinchona calisaya tree, which was added to their drinking water by command. Known as quinine, this extract was the only remedy known to moderate malaria, a substantial problem for European troops stationed in India.

But, although its inclusion in the soldiers' drinking water significantly reduced the incidence of malaria, the bitter taste of quinine made the water almost undrinkable; unless, that is, it was accompanied by a large shot of gin. Hey presto! The gin and tonic. It is debated whether the final twist of lemon or lime is a military attempt to foil scurvy or the inspired invention of an unknown imbiber, but its added zest is essential to the thrust of a good G and T.

The unctuous aromatics that give gin its character and quinine its piercing astringency create a remarkably well-balanced whole, one of those never-never tastes that is as 'moreish' as it is inviting on a tropical Sunday. A combination that has made yellow the colour of summer - yellow labels on the Indian Tonic Water, yellow lemons to slice.

Gin is also a vital ingredient in many other drinks. These include martinis2 (shaken, never stirred), slings and punch.

A must for any summer party, in a punch bowl combine:

This refreshing drink originated in Singapore. It is a sensational lifesaver. Luxury for us commoners. So cheers, Tommy!

1A 'Tommy' is a British soldier.2A martini is a cocktail made of gin or vodka and dry vermouth.