Kiwifruit Content from the guide to life, the universe and everything 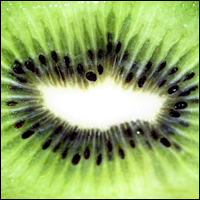 Someone once threw me a small, brown, hairy kiwifruit, and I threw a wastebasket over it until it was dead.
- Erma Bombeck, US humorist

A brown, furry, blunt-ended, oval fruit the size of a rather large hen's egg. Somewhat unattractive on the outside (who would want to eat a furry fruit?), when cut open it reveals an intensely jewel-like interior of green flesh, with black seeds radiating around a white core. Kiwifruit grow on a vine, one of the Actinidia species (usually A chinensis or A deliciosa), from the Actinidiaceae family. In New Zealand the common spelling is 'kiwifruit', in other parts of the world 'kiwi fruit' is also used.

A kiwifruit is not a kiwi. A kiwi is a large, brown, rather aggressive, feathery bird with a very long beak. This ground-dwelling, nocturnal and endangered bird is native and endemic to New Zealand and is often used as that country's national icon.

A kiwi is also a colloquial term for a New Zealander. Kiwis (or New Zealanders) often experience a sense of annoyance when hearing a kiwifruit referred to as a kiwi. Asking for a 'kiwi smoothie', for instance, renders an image of a feather and beak milkshake.

The Actinidia species vine originally hails from China, where they grow wild. There it is known variously as yangtao for the smooth-skinned variety, and mao yangtao or mao ertao for the hairier ones ('mao' means hairy). Traditionally Actinidia species have been used in Chinese medicine, where the root, fruit, or leaves have been utilised to treat a variety of complaints.

The modern kiwifruit was developed in New Zealand in the early part of the 20th Century. A woman visiting her missionary sister in China took seeds back to New Zealand, where local orchardists and horticulturists grew the first varieties, known as Chinese gooseberries. Plants became available by catalogue around 1916.

Over the next 40 years Chinese gooseberries were grown in orchards, supplying local markets. In the 1950s and 1960s the first large scale markets were created. The Chinese gooseberry was renamed 'kiwifruit' for the international market, but in New Zealand the new name didn't become widely used until the kiwifruit boom of the 1980s.

Plants and seeds were exported and kiwifruit are now grown commercially and in gardens in many parts of the world, including in cool climates. Modern breeding has produced a range of kiwifruits including hairless ones, and fruit with yellow flesh.

There is a difficulty in arguing that organic food is environmentally friendly if it has been transported large distances to get to you. You can imagine that a kiwifruit would rate very highly on the carbon footprint scale if it were exported by airfreight; they are, in fact, always transported by ship.

How to eat a Kiwifruit

The usual way to eat a kiwifruit is to slice across the shortest axis so the fruit is in two halves. Use a teaspoon to scoop out the flesh and eat directly from the spoon. This works better with the soft flesh of a fully ripe kiwifruit, which also happens to be when they taste the best.

Another way to eat a kiwifruit directly is to eat it skin and all. Some kiwifruit varieties are relatively hairless and the texture and tartness of the skin complements the sweet, juicy interior. Even with the hairier varieties, some people enjoy eating kiwifruit whole (although this might be considered an acquired taste). If the fruit is too hairy, then opening the fruit (with teeth or knife) and squeezing out the fruit into the mouth is an acceptable practice.

Classic New Zealand kiwifruit cuisine is to peel a ripe but firm kiwifruit and then cut into slices (crosswise rather than lengthwise). These slices are then laid decoratively on the top of a pavlova that is already covered in whipped cream.

Kiwifruit are also used in smoothies, fruit salads, wine, liqueurs, sauces, jams, chutneys, chocolates and as a marinade for paua (a kind of seafood). They are also delicious with yoghurt or ice-cream. Don't try adding raw kiwifruit when making fruit jelly though, as kiwifruit have an enzyme that affects the gelatin and stops the jelly from setting. The same enzyme will affect yoghurt and ice-cream if you leave kiwifruit sitting in them for any length of time. Cooked kiwifruit doesn't have the same effect, and can be used to make cool green jelly cubes.

If you want to experience some enzyme action, you can extract the DNA of a kiwifruit at home1. This action works the same as with the jelly because the enzyme breaks down the protein structures that hold the DNA within each cell.

Some care needs to be taken by people with food and latex allergies, as kiwifruit can produce allergic reactions, possibly severe in children. While allergy to kiwifruit is still relatively rare, it is on the increase in some countries. The causes of this are being researched, and it is still unknown if the increase is due to more people eating kiwifruit, or if more people are becoming sensitive. Kiwifruit contain high amounts of salicylic acid (the substance used to make aspirin) and care should be taken by people affected by it.

Kiwifruit vines are well suited to organic production, and organic kiwifruit have been found to be higher in some nutrients than conventionally grown ones. They are a good source of minerals, antioxidants (lutein) and folic acid. A kiwifruit contains twice the vitamin C of an orange, more fibre than an apple and as much vitamin E as avocado has. This combination of antioxidant vitamins discourages cancer-producing cells.

Modern research is investigating the health benefits of eating kiwifruit, including improvements in sleep and blood health, and reduction in respiratory illness. Kiwifruit is high in potassium ions, important for maintaining a healthy blood pressure, as well as normal heart function. Kiwifruits' protein-digesting enzymes (proteases) enable it to have a cooling effect on heartburn. Western diets can be dangerously high in salt (Na+) and low in potassium (K+) so eating kiwifruit can re-balance this. Why not try kiwifruit in these simple vegetarian recipes?

1If you don't have a kiwifruit to hand you can also extract your own DNA.