'Disneyland Adventures' - the Computer Game Content from the guide to life, the universe and everything 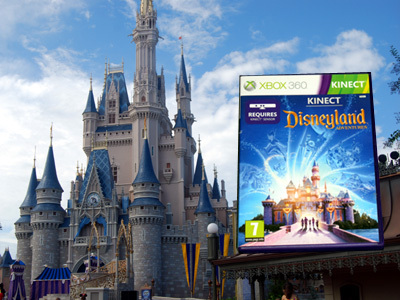 Disneyland Adventures is a computer game originally released in 2011 for the Xbox 360 console using the Kinect (a gaming accessory with 3D motion capture, facial recognition and voice recognition capabilities that allows a player to interact with games by talking to them, waving and pointing). It was updated and re-released for the Xbox One console and Windows 10 in 2017. The plot of the game? You are a child exploring and enjoying the Disneyland  theme park in California. By using your arms, body and voice you can guide your customisable character around the park. There you can meet and interact with 42  Disney characters and complete 100 different quests and 18 different ride-inspired mini-games, each of which has different levels and different flavours. The quests essentially turn the virtual replica of Disneyland into a large game of hide and seek, with many other hidden secrets to look out for.

Just like Disneyland, the game features different Lands with many different characters in each Land. Mickey Mouse gets about a bit as he can be seen in many Lands.

The Lands, in clockwise order from the park entrance, are:

Each Land also has a shop. In each shop you can purchase the photo albums and autograph books that will allow you to collect the photos and signatures of the characters located in that Land. You can also buy a range of different Disney-themed clothing, from T-shirts of particular characters to complete costumes that make you look like a fairy. Also sold are a range of badges, named 'Pins'.

Each Land has its own unique selection of background music from appropriate Disney films. For example, you can hear the theme from The Rocketeer (1991) in Tomorrowland, 'The Ballad of Davy Crockett' (1955) in Frontierland and 'Summer Magic' from the 1963 film of the same name in Main Street USA.

The 'Pins', are used to track your progress throughout. Each attraction completed will reward you with a Pin (bronze, silver, gold or platinum) depending on how well you have completed the attraction's mini-games.

Exploring the virtual park can be done from a seated position and involves a small degree of waving and pointing, with optional voice commands. Most of the mini-games simply require players to wave their arms, although some may require varying degrees of crouching, standing and/or jumping. Players with limited mobility should be able to play the majority of the games, but may not be able to get the maximum available number of points. Many of the mini games can be enjoyed in a two-player mode.

When you meet one of the Disney or Pixar characters, you can walk right up to them and greet them either with a wave, or with the voice command 'Hi there'. Once you have said hello and are interacting with them, you can give the following commands, either vocally by saying the words in italics below, or by performing the appropriate action:

Each character reacts to the different commands in a different way, with many having a range of responses for each request. Many characters when you greet them will ask if you will go on a quest for them. These quests are typically to locate hidden objects around the park or to take photographs of the different places. Sometimes you are asked to buy specific clothing. So, for example, you have to buy and wear the Space Ranger costume in order to be trained as a Space Ranger by Buzz Lightyear. Or you might be asked to play a mini-game and complete a specific challenge within it. Going on these quests, which are of differing difficulties, helps you earn badges and money.

As you explore the park to undertake each mission, you can also take the opportunity to look out for other hidden secrets at the same time. Before too long you find yourself exploring Disneyland, hunting hunny pots for Winnie-the-Pooh as well as peeping and peeking for Peter Pan's Shadow.

The interplay with the characters really is one of the game's key strengths. It should be noted that Ariel the Little Mermaid appears with legs, while Prince Adam from Beauty and the Beast appears in beast-form, rather than as the generic prince he turns into at the end of that film.

The highlights of the voice cast include:

There are a few strange choices of Disney characters represented in the game. Disappointingly, instead of Captain Jack Sparrow, the character from the Pirates of the Caribbean attraction that you meet and interact with is Black Barty (Troy Baker) who was created for this game. Being a child-friendly pirate in a family resort, the beverage he quaffs and craves the most is coffee rather than rum; at $5,000 a cup it is almost cheaper than a real drink at Disneyland.

Strangely, of the 42 characters that you can interact with, three1 are from Song of the South (1946), with Br'er Fox given a particularly prominent role. This promotion of a film that Disney themselves ruled out releasing on home video due to its racist content makes children innocently want to see the film and can make for awkward conversations in which parents unexpectedly have to explain the concept of racist cartoon characters to children. The only other disappointment is that in this game, Disney's fairy society is stratified. Only female fairies are considered fairies while males are ridiculously called 'Sparrowmen' instead2.

The game is contained within a virtual recreation of how Disneyland appeared in 2011 – as with most theme parks Disneyland is continuously developing and new rides have opened and old ones have closed or been rebranded since the game was created. Not everything in Disneyland has been created for the game, so for example you cannot enter the various restaurants. Some of Disneyland's rides and attractions have inspired themed mini-games that can be played by going to that attraction's location. Other rides feature a short video of that ride, such as the spinning teacups, carousel or Astro Orbiter. Other rides cannot be interacted with at all. Some rides have been removed from the game entirely because of rights issues; when the game was released LucasFilm had yet to be purchased by Disney and so Disney did not have the copyright to Star Wars or Indiana Jones. Similarly ToonTown was inspired by Who Framed Roger Rabbit, which was a co-production with Amblin Entertainment, so the ToonTown-themed rides do not appear.

Disneyland Adventures is remarkably realistic and, if you have been to other Disneyland parks such as the Magic Kingdom in Florida or EuroDisney in Paris, it is easy to find your way around the virtual theme park. Yet there are differences to real life. If you go to Disneyland for real, do not expect to see Mickey Mouse Money or Disney Dollars lying around on the ground for you to pick up. In real life, you cannot simply expect to walk up to a Disney character, or go on a ride without queuing for two or more hours. In the game to get from place to place you have to barge your way past other park visitors – this behaviour is not acceptable in the real world. Mickey Mouse will not give you a camera-phone and nor will Cinderella give you a magic wand capable of creating money out of thin air.

Though the game is surprisingly realistic, it is strongly stylised in the Disney mould; Disneyland is seen through rose-tinted spectacles where it is always sunny without a cloud in the sky or so much as a blade of grass out of place. This also means that the cartoon characters - including anthropomorphic mice, fairies, beasts, pirates and aliens - do not conflict with the background.

In short, if you have ever wanted to pull the Sword from the Stone, dance with Cinderella3 or, erm, give Captain Hook a high-five, then this is the game for you. There are so many details and 'hidden Mickey' secrets to look out for that the game is virtually impossible to complete as there is always something more you have missed. As the game progresses you find you have to return to areas you thought you had completed only to discover new characters have appeared there, or you now have a new item that you can use to investigate the Land in a new way. The ride-based mini-games are delightfully different, allowing you to soar through the cosmos, fly over London, have snowball fights with Yetis or rescue a runaway train from ghosts.

1Br'er Rabbit, Br'er Fox and Br'er Bear.2How is this different to ruling that only male fairies are fairies and naming female fairies 'Titwomen' instead?!3But not after midnight.