Fauveau's Breastplate Content from the guide to life, the universe and everything 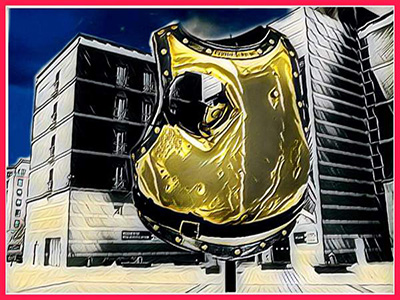 In the summer of 2015, the Royal Armouries in Leeds staged an exhibition to mark the bicentenary of the Battle of Waterloo. Its entrance area comprised an open space, with a single artefact mounted on a plinth at its centre. The artefact chosen was so shocking that its image will remain imprinted in the memory of many of the visitors who encountered it.

It was a brass breastplate, part of the light armour worn by Napoleon's elite heavy cavalry. The right side of the chest area, front and back, was pierced by a neat hole, almost perfectly circular. The hole was fully ten centimetres in diameter, the result of a cannonball passing straight through the unfortunate cavalryman.

The breastplate normally resides among France's own national military collection, in the Musée de l'Armée within the Hôtel national des Invalides in Paris. Its essential beauty and fine craftsmanship has survived its violation, leaving a powerful symbol of the paradox of war; that of honour and futility combined in the same enterprise. The story behind the breastplate is partly known, though embellished with an enigma that undoubtedly enlivens it.

The mounted forces at Waterloo were formidable and significant on both sides. The French complement was slightly the larger, comprising more than 20 regiments and some 14,000 horses. Two of these regiments were the Carabiniers. They formed part of the 12th Division, under the general command of General Nicolas-François Roussel d'Hurbal, and were held in reserve for much of the battle. The overall command of the French cavalry, fatefully as it turned out, fell to Marshal Michel Ney.

François-Antoine Fauveau was 23 years old at the time of the battle. His family were farmers at Le Heaulme in what is now the Val d'Oise department, north of Paris. He was a dairyman until his recruitment some six months before the battle. Fauveau was a tall man for his time, with the ideal build for a heavy cavalryman. He was transferred to the Second Regiment of the Carabiniers (known as the Deuxième) only a month before the hostilities.

The Deuxième Carabiniers wore brass-clad steel breastplates and helmets over a white tunic and breeches. Their helmets bore a red horsehair crest. Although they carried the short-barrelled carbine muskets implied by their name, they fought at close quarters with sabres. Their war record was already formidable, and they must have appeared as an imposing adversary to the men who faced them. This proud regiment was about to experience a fall, however. The events of 18 June, 1815, would lead to its disbanding.

The Carabiniers were noted for their discipline: Fauveau's breastplate, as well as his helmet, his boots and his steed's tack would surely have gleamed as he rode to war. He had plenty of time to burnish them, being in the vicinity of the field for 24 hours before being brought forward at around 4pm, at the height of the battle. The French side's cavalry operations had until then been limited to the more lightly-equipped dragoons and lancers, taking place mainly in the west of the field against the fortifications around the Château de Hougoumont, which the British never relinquished. The centre of the field and the La Haye Sainte farmhouse were more precarious, however, and Ney took it upon himself to launch a mass attack. Although reckless, the ploy nearly succeeded by sheer weight of numbers. As things turned out, however, it would cost a young cavalryman his life, along with those of as many as two thousand of his peers.

Wellington's line, with La Haye Sainte forward of its centre, included some 50 cannon in 6 and 12 pound pieces. The British tactic when faced with cavalry was to close infantry squares around the guns, sustaining musket-fire in all directions as their assailants circled. Each side of the infantry squares had up to four ranks of soldiers with fixed bayonets. As horses refused to charge the densely-packed formation, the French cavalry were unable to attack the infantry with their sabres but could be targeted by the defenders in the squares. The squares proved very effective, particularly on the wet ground that made Waterloo less than ideal for mounted warfare. Before this, as the cavalry approached, the defensive line was even more deadly with the squares open and the artillery pieces rotating their fire as soon as the cavalry came into range, sustaining it until the last possible moment.

According to most accounts, the Deuxième was devastated before it reached the line. The position on the field from which the breastplate was recovered is not accurately recorded, but it was certainly well short of La Haye Sainte. The round that struck it was a six-pounder. Very many men and horses met a similar fate, and the breastplate's bearer was arguably among the luckier ones. The decisiveness of the insult makes it certain that he did not linger.

There was a note tucked into the breastplate, bearing a name - Antoine Fauveau. According to some versions of the story, however, a younger brother was wearing it instead. Family tradition holds that Antoine's marriage was planned for the week in which the battle fell, leading his brother to step forward and take his place on the field. Commune records confirm that Antoine left descendants, although they could, of course, have been conceived before his demise.

The final outcome of the Battle of Waterloo, and hence the fate of Europe, might have turned on the ruin of the Deuxième. For most of the day Napoleon fought the British alone, but the protagonists knew throughout that another army of the coalition against the Emperor, the Prussians under Field Marshal Blücher, would join the fray if they prevailed in a separate confrontation. An hour after Ney's over-ambitious foray, the advantage swung decisively against Napoleon's forces with Blücher's arrival, but it is widely believed that earlier and better-organised action by the French could have won the battle for them before their foes combined. Wellington himself conceded this in his report1. As it turned out, Napoleon's elite infantry in the guise of his Imperial Guard was held back as Ney charged, only to be thrown unsuccessfully against a reinforced opponent some hours later. Hindsight therefore suggests that the timing of the Deuxième's advance was right, but its lack of support and exposed approach to its target were to prove fatal.

Back at the entrance of the Royal Armouries' exhibition, the brutality of the Battle of Waterloo and the nature of its critical engagement were each crystallised in the display of Fauveau's Breastplate. Which Fauveau actually wore it, though, will never be known.

1This report included the remark quoted in the heading. One contemporary meaning of 'nice' was ‘finely balanced'.