The Kadikoy Crocodile, Istanbul, Turkey Content from the guide to life, the universe and everything 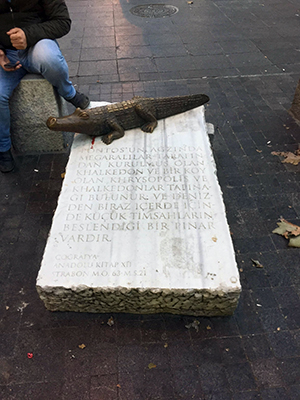 Istanbul is considered to be the only city in the world which is on two continents. The city is divided down the middle by a narrow channel known as the Bosphorus. Everything to the west of it is in Europe while everything to the east is in Asia. Both the old and new centres of Istanbul are on the European side so that's where most of the tourist monuments, the palaces, the Roman ruins and the shopping streets are located. The Asian side of the city is mainly residential suburbs that are rarely visited by tourists.

Kadıköy is a town on the Asian side of the Bosphorus. There's been a town here for more than 2,500 years - originally it was called Chalcedon1. As Istanbul has grown, Kadikoy has become a suburb of the city, but it still has the feel of a town rather than a collection of houses. There's a main street (Söğütlü Çeşme Street), with a maze of small streets off it full of cafés, souvenir shops, and stalls selling fresh food and spices. It's a lively and bustling sort of place, with lots of students hanging around and people meeting and chatting.

In the middle of a small square at the junction of Muvakkıthane Street and Mühürdar Street is a strange monument. It is a small bronze crocodile, only slightly over a metre long and rather chunky in appearance. It sits on a large marble slab which has an inscription in Turkish.

So why is there a small crocodile here, and what does the inscription mean?

Strabo was a native of Pontus in the early days of the Roman Empire. This is the area which is today the Black Sea coast of Turkey. He travelled all over the empire and decided to write about what he'd seen. His Geographica, written in ancient Greek, was the first work to attempt to describe the whole known world. It was based not only on Strabo's own travels but also on accounts made by other travellers to places Strabo hadn't been. Geographica was written in 17 books, and almost all of them have survived up to the present day. The originals have long since disappeared, but the information was considered useful so they were copied many times. Strabo seems to have worked on these books and updated them a few times, because there are details in them clearly dating from around 20 BC, while others must have been written as late as 20 AD. Strabo himself died in 23 AD.

The geographical encyclopaedia has a lot to say about some areas, but others just have a few short comments. Here's what he has to say about one location:

Here upon the mouth of the Pontus is situated Chalcedon, founded by the Megareans, the village Chrysopolis, and the Chalcedonian temple. In the country a little above the sea-coast is a fountain, Azaritia, which breeds small crocodiles.
– Strabo Geographica book 12 chapter 4

This is taken by modern researchers to be Kadikoy.

The Turkish inscription on the slab is a translation of this, although it appears to leave out the name Azaritia.

It needs to be said - there are no wild crocodiles in any part of Turkey. The nearest place where any crocodiles might be found is the Nile River in Egypt, which is more than 1,000km from here. The ancient Egyptians, of course, had a crocodile god, Sobek, in their strange collection of animal-headed gods. There were two different towns in Egypt called Crocodilopolis, the city of crocodiles.

Up to the early 20th Century, Nile crocodiles also lived in what is now Israel. This is further north than Egypt but no closer to Kadikoy. About two thirds of the way along the coast from Tel Aviv to Haifa is the Kebara Swamp. It is fed and drained by the Taninim (Crocodile) River. Up to the 20th Century, crocodiles lived in the swamp and the river. In the 4th Century BC there was even a town called Crocodilopolis on the headland just south of the river's mouth. The last recorded sighting of a crocodile in the area was 1912.

But Egypt and Israel are both a lot warmer than Turkey and crocodiles like the heat. It seems unlikely that there were ever wild crocodiles living in or near Kadikoy.

Strabo's wording 'a fountain... which breeds small crocodiles' could mean that people bred the crocodiles at this fountain. But that doesn't seem likely either.

We'll never know now what prompted that single sentence in Strabo's huge work. Perhaps the author dropped his collection of notes, each inscribed with an interesting fact on a sheet of papyrus, and put the one about the crocodiles back in the wrong place in the pile. Or perhaps there were some sort of small reptiles such as lizards and the tale grew in the telling, eventually becoming crocodiles.

The bronze statue was installed in 2007. It was made by Dr Nilüfer Ergin, a professor and sculptor from the Marmara University's Faculty of Fine Arts. She makes no claim that there were ever crocodiles in this region. It is part of a project to capture the 'cultural memory' of the town. The crocodile, by referencing Strabo, brings to mind mythological memory, while other works concentrate on more recent social memories.

1The mineral chalcedony is named after this town.