How to Pronounce Turkish Content from the guide to life, the universe and everything 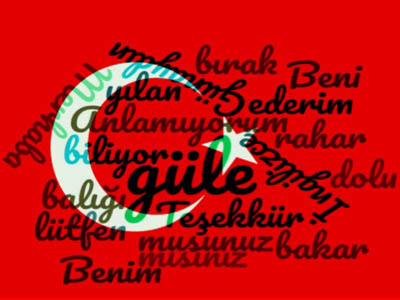 The Turkish language is written using the Roman alphabet (the familiar A B C one that is also used to write English), but with some extra letters and accents. The system was designed in the early 20th Century. At that time, the Turks had just overthrown the Ottomans who had ruled the country since about 1300 but whose Empire was seen as increasingly corrupt and powerless. During the Ottoman period, the Turkish language had been written using the Arabic script. This wasn't entirely suited to the language, which meant that reading was a difficult skill which only the upper classes could afford the time to acquire. When the new Republic of Turkey was set up, the Roman alphabet was chosen for two reasons - it could be made to fit the sounds of Turkish better, and it was a sign that Turkey was becoming more a part of Europe and moving away from the seemingly old-fashioned Arab world.

The writing system devised is a good one: spelling is simple and matches the pronunciation exactly. It is always possible to know exactly how a Turkish word is pronounced. This is a complete contrast to English where the rules are complicated and even then one in every six words doesn't obey the rules anyway.

In the following, some of the Turkish letters may not display properly in your browser, so I'll describe them as well as displaying them.

The first rule of Turkish pronunciation is that every letter is there for a reason and every letter except one represents a sound. Letters are not combined as in English.

The G with a Cup

The letter G with a little cup over it (ğ) is the one letter that is silent in Turkish, but it still has a function - it lengthens the preceding vowel.

The Dot on the I matters

Turkish has eight vowels. This may come as a shock if you think that English has only five. In fact English has at least 11 vowels sounds, so Turkish is simpler, and each vowel has its own letter, so they're easily learned.

a, e, i, o and u are similar to European languages such as German, Italian and Spanish:

The vowels ö and ü (o and u with two dots over them) are the same as in German. These are sounds that don't exist in English but are common in French and German as well as the Scandinavian languages. For English speakers:

The vowel i without a dot (ı) is the neutral vowel1, similar to 'uh' in English or the sound 'er' as spoken in an English accent.

These four letters can be confusing, particularly since the C and J represent different sounds from in English.

The other two are not too difficult since the symbols don't occur in English:

Here's a table of all the letters

As examples in Turkish pronunciation, here are some handy phrases you may need to use on your trip to Turkey. In this table, we use the 'er' sound in the English pronunciations to indicate the neutral vowel as spoken by an English person. If you're an American, substitute the 'uh' sound.

1Linguists call this a 'schwa'.