The Dolmabahce Palace, Istanbul, Turkey Content from the guide to life, the universe and everything 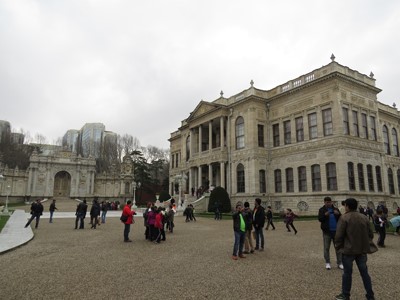 The Dolmabahçe Palace (pronounced dolma-bah-chay) was the palace of the Sultans, the rulers of the Ottoman Empire, from about 1850 until the Empire collapsed in about 1920. It is located on the shore of the Bosphorus, the narrow sea channel which separates Europe from Asia, in the area of Istanbul known as Beşiktaş.

The Palace is now open to the public for guided tours. There are two tours - one of the reception rooms where the Sultan received visitors, and the other of the private rooms where he lived with his family.

The Turks conquered Constantinople, as Istanbul was then known, in the mid-15th Century and made it the capital of their Ottoman Empire. They built themselves a huge palace on the highest point of the city. This was known as the Topkapı Palace and it was inspired by the tent cities of the nomadic Turks before they had settled into a sedentary life. There were huge open courtyards surrounded by low buildings. There were airy pavilions with open doorways without doors. Most of the palace was at ground level. For four centuries the Sultans ruled the Empire from here. Most of the ceremonies at the Topkapı were held out of doors.

By the 19th Century, the Empire took in much of southeastern Europe, and the Sultans were very anxious to be considered Europeans. They wanted a palace in which they could entertain and impress European monarchs. The Topkapı was now old and decrepit, lacking the sort of luxury of a modern European palace. In addition, it was in the centre of the old city, but most business had moved north across the deep sea inlet of the Golden Horn, to the area known as Galata, and the Sultans were cut off from the life of the city.

In 1843, Abdülmecid, the 31st Sultan (reigned 1839-1861), commissioned a new palace in a low-lying area on the shore of the Bosphorus. The site had previously been a garden built on reclaimed land, hence the name: Dolmabahçe means 'filled garden' in Turkish. The site was big enough for the palace, but being confined by the Bosphorus on one side and a steep hill on the other, it did not have room for extensive landscaped gardens.

The palace was completed in 1856. It was phenomenally expensive to build, taking a significant part of the GNP of the whole Empire. The Ottomans didn't have this sort of money so they funded the palace with massive loans from Western Europe. This was certainly one of the factors that bankrupted the Empire, causing it to be known as the 'sick man of Europe'.

The palace was and still is the biggest in Turkey, although, with a floor area of 45,000m², it is smaller than Versailles in Paris or Buckingham Palace in London.

In the early 20th Century, a political movement called the Young Turks, led by Mustafa Kemal, later known as Atatürk, Father of Turks, brought about the downfall of the Ottoman Empire and replaced it with a democratic republic with Atatürk as the first President. The Sultan stepped down as ruler of the Empire but continued to be Caliph, the leader of the Muslim faith. The Dolmabahçe was abandoned, as Atatürk chose to make Ankara the capital of the new republic. In later years, though, he used the palace as his residence when he had work to do in Istanbul. He died there on 10 November, 1938. The room where he died is on display, with the clock stopped at 9:05, the time he died.

Design - Are There Any Women Present?

Turkish custom did not allow the women of the Sultan's family to mix with men other than the Sultan himself, and his sons. The palace is divided into two sections, about equal in size. The Selamlık was the reception area, where the Sultan could receive visitors, while the Harem was the forbidden area which was reserved for the Sultan and his immediate family, including his mother, his wife, his concubines and his sons and daughters, as well as servants. The Selamlık and the Harem are kept strictly separate within the one building.

This segregation between visitors and women is the only really oriental feature of the palace. The rest of the design is pure European, and is similar to other royal palaces of Europe, with lots of gold leaf, ornate columns, padded chairs and occasional tables.

The building is divided into three, and these are arranged so that the façade as seen from the sea is symmetrical:

The palace is open to the public between 9am and 4pm every day except Mondays and Thursdays. The Number 1 Tram will bring you from the centre of the old city to Kabataş or you can take the underground funicular from Taksim Square, the centre of the modern city, to Kabataş. From there it is only a 500m walk north along the shore of the Bosphorus to the gates of the palace. Just inside the gate there's a beautiful ornate clock tower.

Viewing of the palace is by guided tour only. Tours are available in either Turkish or English, and there are two separate tours, one doing the more impressive Selamlık reception areas, the other visiting the Harem. Each tour lasts about 45 minutes. In busy times you'll have to queue for the tour after having queued to buy your ticket, so you might not have time or the inclination to take in both tours. If you opt for one only, choose the Selamlık (Reception Areas) tour. In January 2015, the admission prices were as follows:

The Painting Museum is a mediocre exhibition of works of art that used to hang in the palace - not worth the admission fee, but you might consider it if you paid the Full Palace admission.

There's also a Clock Museum, good if you like clocks, and a building called the Crystal Pavilion which is a fancy conservatory. Both of these are included in all admission tickets.

Having bought your tickets, you'll have to wait or even queue for the guided tour. You must cover your shoes with blue plastic slip-ons which are provided. These protect the carpets, but may make you more liable to slip and fall, so be careful. The tours are given by taciturn individuals whose only desire seems to be to get to the end of the tour. You won't learn much from them. No photographs are allowed in the building.

The Dolmabahçe is rated by most of the guidebooks as one of the top ten attractions in Istanbul. This Guide would not place it so highly. Try and visit at a time of year when it is not too busy. Nightmare stories of standing in line for hours, only to finally reach another queue, are not what you want as your holiday memories. The staff are unhelpful and do little other than stopping people taking photographs. The ornate decoration is impressive: Turkish citizens must marvel at the opulence and realise how badly the Sultans were oppressing the poor in order to pay for it all. Western tourists probably want to see something different, something slightly oriental and mysterious - they won't find that here. For that, they should go to the other great palace of Istanbul, the Topkapı.

The Dolmabahçe Palace is certainly worth a visit, but confine yourself to an off-peak time, and only go on one of the two guided tours.

1Corinthian columns are one of the three types of columns used in ancient Greek temples. They have an ornate top ('capital') carved in the shape of acanthus leaves.2French meaning 'fools the eye', trompe l'oeil is a style of painting which creates the illusion of depth, eg a 'waterfall' in a pavement, which can be walked over.