Yves Saint Laurent - Iconic Fashion Designer Content from the guide to life, the universe and everything 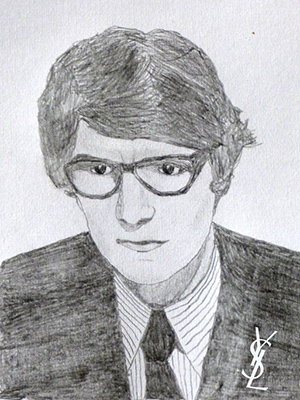 Yves Saint Laurent was a fashion designer whose work became iconic in the 1960s. As the director of his own fashion house, he designed both haute couture and ready-to-wear fashion, as well as branching out into perfumes. He retired in 2002 and died in 2008 but his brand has continued strongly into the 21st Century.

Yves Henri Donat Mathieu-Saint-Laurent was born on 1 August, 1936, in Oran, Algeria, North Africa. From an early age he developed a talent for drawing. He enjoyed reading his mother's fashion magazines, and took to designing dresses for his two sisters' dolls. He also made paper dolls out of the models in the magazines, then designed and made paper clothes for them. After having seen plays at the theatre, he built mini sets out of cardboard and wood, then added tiny actors whose costumes used material from his mother's clothes1.

In 1953 Yves entered a competition to design clothes for the Secrétariat international de la laine (International Wool Secretariat). He won a prize and travelled to Paris for the award ceremony. There he met Michel de Brunhoff, the editor of the fashion magazine Vogue, who encouraged him to move to Paris to study fashion. His parents were supportive as they recognised his passion for the subject. Yves entered the competition again the following year and this time won the Dress Category first prize2. De Brunhoff introduced Yves to Christian Dior in 1955. Yves' designs were so impressive, he was recruited to work in Dior's fashion house.

Yves' set designing skills came in useful as his early tasks involved designing the interiors of Dior's boutiques3, and he also had involvement in making the dresses Dior designed. Soon, however, he was allowed to design clothes for Dior's haute couture collection. When Christian Dior died in 1957, Yves Saint Laurent became Artistic Director of Dior, at the age of just 21.

Yves Saint Laurent's first collection for Dior was launched on 20 January, 1958, to great acclaim. In the audience was Pierre Bergé.

Pierre Bergé was born on 14 November, 1930, on Oléron, the island off the west coast of France. He enjoyed music and writing, and moved to Paris at the age of 18 with the aim of becoming a journalist. Initially working as a book dealer, he went on to become the editor of a political journal. At the age of 20, he moved in with the artist Bernard Buffet and managed his career. On 20 January, 1958, he accompanied Bernard to Yves' fashion show. He met Yves in person a few days later at a dinner organised by Harper's Bazaar magazine and it was love at first sight, so they began a relationship.

Success at Dior was short lived for Yves. By 1960 his collections were not being well received by fashion critics. The Algerian Crisis was ongoing, and he was drafted into the army. Military life was detrimental to his health, so he soon found himself in hospital having had a nervous breakdown. While he was away, he lost his job at Dior as a new artistic director was appointed.

When he discovered that Dior had replaced him, Yves decided to set up his own fashion house. Pierre raised funds by selling his own house and finding a private investor. He also helped Yves to sue Dior for breach of contract. It was agreed that the dismissal had been unfair, so Yves was given a payout. Thus on 4 December, 1961, the Yves Saint Laurent Haute Couture House opened, adorned with the now-famous intertwined YSL logo.

The Yves Saint Laurent Haute Couture House's first collection for women was presented on 29 January, 1962. Its garments featuring a blend of masculine and feminine tailoring impressed the critics and made an excellent start to Yves' new venture.

Yves' fame started to increase. He designed the clothes for the two leading ladies in the film The Pink Panther that was released in February 1964. He met the ballet dancers Rudolf Nureyev and Margot Fonteyn in 1965, and went on to design outfits for Margot. He also met Catherine Deneuve in that year, and their collaboration and friendship went on to span the decades.

The 1965 collection cemented Yves Saint Laurent's position as an icon of fashion design when he launched the Mondrian Dresses. Inspired by the abstract artist Mondrian's geometric paintings, Yves created a series of dresses simple in shape and bold in colour. Although they were designed as haute couture, they were soon mass produced and sold in shops, taking the fashion out of the studio and on to the high street.

1966 was another iconic year for Yves when he introduced 'Le Smoking' - a tuxedo jacket for women. Again blending masculine and feminine style, it wasn't a favourite of the critics but sold well in shops. In 1967 he introduced the Pantsuit - a jacket and trousers for women. The double-breasted pinstripe suit was tailored to be worn with high heels without hiding the wearer's shape and it was called 'the sensation of the Paris season'.

Yves' feminised version of the Safari Jacket was also launched in 1967 and became popular in the shops in 1969 after it featured in Vogue magazine. Men's boiler suits loosely inspired his 1968 collection, when he designed figure-hugging jumpsuits for women.

Later designs were less iconic, drawing their inspiration from other times and other cultures rather than being trailblazing. Trousers still featured prominently, though. He received awards and honours for his work, including being the first living couturier to have an exhibition at the Metropolitan Museum of Art in New York. Yves officially retired in 2002 - he made the announcement at a press conference on 7 January that year, and the Haute Couture House closed on 31 October.

Yves Saint Laurent had other interests in addition to designing clothes. In particular, he collected art. Having been born in North Africa, he felt at home in Morocco, so he and Pierre bought a house there in 1966. In 1980 they established a museum in Marrakech to showcase the extensive art collection.

Yves' health was not always good - in particular he smoked up to 150 cigarettes a day and consumed considerable amounts of alcohol and drugs on a regular basis. The mental health issues he first encountered in the military also continued to affect him. Partly as a result of that4, Yves and Pierre's relationship became tempestuous, so they separated in 1976 although they continued to work closely together.

The Scent of Success

Perfume had been considered to complete a woman's outfit since the 1920s (for example, Chanel No. 5 was created in 1921). Christian Dior's first fragrance was 'Miss Dior', launched in 1947. In 1964, Yves too worked with a perfumer to create his first fragrance for women, simply named 'Y'. 1971 saw the launch of his first fragrance for men: 'Pour Homme'. To promote the new product, Yves posed naked for the publicity photographs, wearing only his trusty spectacles, and with his long hair elegantly coiffed.

The Saint Laurent Rive Gauche Boutique had opened in 1966 to sell his range of ready-to-wear fashion, and in 1971 the 'Rive Gauche' perfumes were launched. There was one fragrance for women and another for men, and they were both presented in distinctively iconic striped cylindrical containers.

Controversially, his next fragrance was called 'Opium'. A heady perfume with notes of rich Oriental spices, it became a classic of the YSL range after its launch in 1977 as media criticism of the connotations behind the name increased demand for the product. The 1983 perfume 'Paris' was very different, containing light floral tones and celebrating the city of fashion, but became a classic too.

The fragrance range continues to be developed - for example 'Black Opium' was released in 2014 and 'Mon Paris' appeared in 2016.

As well as designing clothes for plays and films, Yves occasionally appeared on screen. A number of films about his life were also produced, and 2014 was a particularly notable year.

The first 2014 film, entitled Yves Saint Laurent, was based on the book of the same name by Laurence Benaim and starred Pierre Niney as Yves. Guillaume Gillanne played Pierre.

Skipping through time, the film touched on the start of Yves' career in the late 1950s, his mental health issues, and his later life in the 1980s and 90s. Glorious scenes set in Paris, Morocco and in his luxurious homes made the film very pleasant to look at. However, the film was somewhat unsatisfying as numerous biographical details were left out and not even alluded to as the time periods shifted. As the film was in French with subtitles, it had a limited release in the USA and received about $20 million at the box office worldwide, from a budget of about $15 million.

The film was released on DVD in 2014 and contained extras including interviews with Laurence Benaim, the models and other women who worked for Yves, and with Pierre Bergé himself.

The other 2014 film, entitled Saint Laurent, was made slightly more cheaply (it cost about $11 million), but it earned just $2.5 million at the box office. Gaspard Ulliel starred as Yves, Jérémie Renier played Pierre, and the film focused on the years 1967 to 1976. Critics were again unsatisfied with the 'diffuse biopic' but it won a César Award for Best Costume Design.

The 'Fondation Pierre Bergé - Yves Saint Laurent' was established in 2002 to preserve all the original designs and clothes that had been produced by the Haute Couture House. Yves Saint Laurent died of brain cancer on 1 June, 2008, at the age of 71, in Paris, and his ashes were scattered in his Marrakech garden. Two museums, one in Paris and one in Marrakesh opened in October 20175 so his brand and his legacy live on.

1Not often with her permission.2Another of his designs won third prize in the same category.3These skills were also useful outside work, as Yves occasionally collaborated with the choreographer Roland Petit to design sets and costumes for stage plays from the 1950s to the 1980s.4Pierre's behaviour also contributed, as he had started spending more time with other people.5Sadly, Pierre Bergé died on 8 September, 2017, aged 86, so he didn't see his plans come to final fruition, although the museums are testimony to his efforts.