Llangollen Railway, North Wales, UK Content from the guide to life, the universe and everything 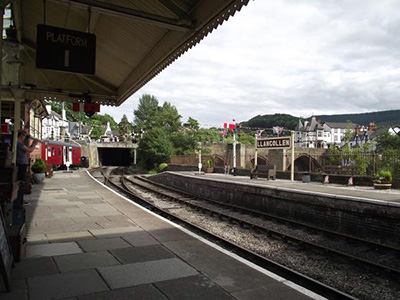 Llangollen Railway offers train rides from Llangollen to Corwen (and back again) in North Wales. The trains use the standard gauge railway line that runs beside the River Dee. Steam Engines, Diesel Multiple Units (DMU) and diesel engines take turns to make the journey, according to a planned timetable, and the carriages date back to the 1950s.

History of the Line

The railway between Llangollen and Corwen officially opened on 8 May, 1865. Originally operated by the Llangollen and Corwen Railway Company, it was absorbed into Great Western Railway (GWR) in 1896, becoming part of their Ruabon to Barmouth line. This became part of British Railways in 1947. A victim of the infamous Beeching Cuts1, the railway closed to passenger services in 1965 and the last goods train used the line on 1 April, 1968.

The track was removed, signal boxes were demolished and the station buildings fell into disrepair. However, the line had not been forgotten. Clwyd Council had bought the land from British Rail and leased it to the Flint and Deeside Railway Preservation Society. On 1 July, 1975, the Society moved in and laid 60 feet of track at Llangollen. Track from the Shell Oil Refinery in Cheshire was donated in 1976 and gradually relocated to its new home. On 26 July, 1981, trains ran again, along a quarter of a mile of track.

By 1985 the track was two miles longer, and reached Berwyn Station. Work continued, and by 1989 the amount of track had doubled in length. Glyndyfrdwy Station was rebuilt using the foundations of the original buildings and material from a building that had been relocated in 1990 from Northwich in Cheshire. Trains started running the 5¼ miles to Glyndyfrdwy in 1992. In 1993 Carrog Station was refurbished, and more track began to be laid. The route to Carrog, 7½ miles from Llangollen, was completed in 1996. The railway as it is today, stretching ten miles from Llangollen to Corwen, was officially opened on 22 October, 2014.

The area around the railway line, on the banks of the River Dee, has been designated an Area of Outstanding Natural Beauty (AONB) and a Site of Special Scientific Interest (SSSI). 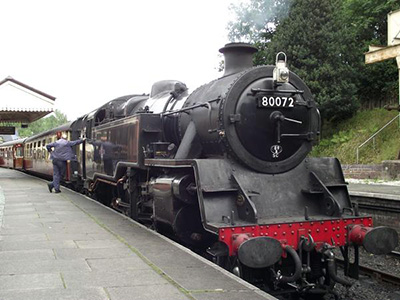 The Llangollen Railway Trust Ltd owns a number of different engines, and their workshops support various refurbishment and rebuilding projects. Most notably, the steam engine Jessie runs along the line in the guise of Thomas the Tank Engine. You may also see the last surviving two-car Diesel Multiple Unit made by Wickham of Ware2. Three ex-British Rail diesel locomotives from the 1960s also travel along the line, in their dark green livery with yellow front panels.

Depending what train you get, you might find yourself in a First Class corridor compartment carriage, with plush seats, or you might get seats on padded benches with a table in an open carriage. Less fortunate travellers may find themselves in open carriages with individual seats which are most like modern carriages. Most trains feature a Guard's Van that can store buggies and any large luggage, and also an adapted carriage with wide doors and plenty of space to accommodate people in wheelchairs, who alight via a portable ramp.

There is a charge to travel on the Railway, but concessions and family tickets are available. A Rover ticket is also available, which allows you to hop on and off the trains as many times as you like during one day. Various events take place during the year, such as 'A Day out with Thomas the Tank Engine' and a '1960s Weekend'. The 'Real Ale Train' runs several times a year, and at Christmas you can travel on the 'Mince Pie Special'.

On other days, you can order Afternoon Tea - you will be allocated a reserved seat with a table. A cake stand, with a selection of sandwiches, scones, Welsh Cakes and fancy cakes, is ready for you when you board, along with hot water in a flask so you can make your own tea or coffee. The 20-mile round trip from Llangollen to Corwen and back takes one hour 40 minutes, which is just right to celebrate a special occasion such as a birthday or anniversary. For those making a one-way journey, or wanting a lighter afternoon experience, Cream Teas featuring scones with jam and cream, plus hot water for drinks, can be ordered instead.

For an even more special experience, a limited number of Driver Experience Days are available. On these days, people are taught how to prepare one of the engines and drive it along the Railway, and they get a certificate to prove it.

Llangollen Station has a small café offering hot and cold food and drinks. There is also a small shop selling vintage-style railway posters, model railway equipment, Thomas and Friends merchandise, and other souvenirs. There is limited car parking by the station, although there are spaces for disabled people with Blue Badge parking permits - road signs direct you to a large long-stay car park a short walk away down the hill.

Berwyn Station contains a small tearoom and is open on weekends. From this station, the Horseshoe Falls, that lead into the Llangollen Canal, are a short distance away. Glyndyfrdwy Station has a tearoom that is open on special event days, as well as a play area for children. Glyndyfrdwy Village is not far from there, where you will find the Owain Glyndwr Memorial Institute that contains a display about the life of the 14th Century 'Prince of Wales'.

Carrog Station also houses a café, and has car parking. The Carrog Trail is a walk that passes more places associated with Owain Glyndwr as well as other historic buildings in the village of Carrog. Dwyrain Corwen East Station is just outside the town of Corwen, which contains a small museum containing exhibitions about local history and railway memorabilia.

Plans to extend the line and add more stations are ongoing3. Volunteers also help with maintaining the current stations. There are also opportunities to get involved with engine building projects. Training sessions enable people to gain skills in traditional engineering, or the skills for jobs in stations or on the trains themselves, so there is something for everyone with a keen interest in the Railway.

1Dr Beeching was responsible for the closure of a third of all Britain's railways in his role as the first Chairman of the British Railways Board that was formed in 1961.2Made in 1957, its exterior is green with a white roof and it features curved wood panelling on the interior.3The original Llangollen to Corwen line was 10.4 miles long so the plan for 2016-18 is to extend the line to Corwen Central Station, which is in the process of being built. The long term goal is to extend the line back to Ruabon and connect it to the National Rail Network.