Norton Priory Museum and Gardens, Runcorn, UK Content from the guide to life, the universe and everything 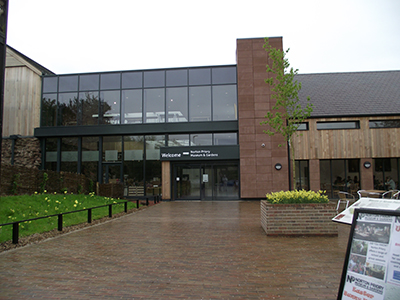 Norton Priory Museum and Gardens is a tourist attraction in North West England. Opened in 1975, it is a 42-acre site centred around the remains of Norton Priory.

Norton Priory was founded in 1134 to house Augustinian canons. Unlike monks, who generally stayed within the walls1 of their monastery, the canons (who wore black habits) were permitted to work as priests in the community outside the Priory, for example in the nearby All Saints Church. Other canons worked on the land in the Priory or used their calligraphy skills in the shelter of the cloister to create illuminated manuscripts.

In 1150, a charter for a ferry across the River Mersey from Widnes to Runcorn was granted, and the Priory later received the profits from the venture2.

1236 saw a fire in the Priory kitchen, which spread to the church. It was an opportunity for the site, though, as the Priory was rebuilt and extended. The original buildings had been built in the Romanesque style, with thick walls and round arches, but the extensions were in the Gothic style, with pointed arches. In 1391, Norton Priory became an Abbey - it was the first Augustinian priory to be so honoured since 1231. A tower was built for the Abbot to live in - it gave him a literal higher status and it also provided a place of safety if the Abbey came under threat.

Norton Priory was one of the first to be closed as a result of Henry VIII's Reformation. In 1536 the Abbot and some of the canons were arrested on a charge of 'debauched conduct'3, but they were released and awarded pensions. The Priory site was then closed and stripped of all valuables.

In 1966 the Brooke family gave the land in trust for the benefit of the public, and the site became a Grade I Scheduled Ancient Monument in 1970. Excavation of the remains started in 1970, so it is now known as 'the most excavated monastic site in Europe'. The foundations of the monastic buildings were revealed, along with many other artefacts that were put on display in the museum that opened in 1975.

Thanks to fundraising and a £4 million grant from the Heritage Lottery Fund, a massive programme of refurbishment took place in 2016. The museum's visitor facilities, dating back to 1985, were upgraded and modernised, making the place bright and welcoming. Most impressively, a mezzanine floor was added with lift access, giving all visitors a superb view across the ruins as well as providing more space for displays and events.

The museum and gardens are open all year round. There is a charge to enter the site, but concessions, family tickets and group rates are available. There is a tearoom in the Gardens, but the main café, selling a range of hot and cold food and drink, including ice cream, can be visited without paying the entrance charge.

The entrance hall contains the visitor reception and a small shop as well as a timeline of the history of the site and the large statue of St Christopher4 from the 14th Century that was saved when the Priory closed and used as a garden ornament for many years. Ramps and steps give access to the Undercroft, which was the storage area for the Priory, and which was preserved thanks to being incorporated into the entrance of the mansion houses that replaced the Priory buildings. 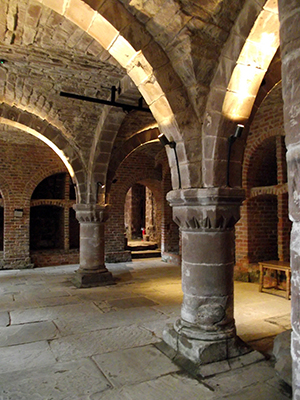 The ground floor exhibition room is the oldest part of the museum building, and it houses a wide range of examples of the stonework that was recovered from the site, as well as fragments of tile and pottery, and replicas of many items. There are hands-on activities and interactive computer consoles enabling visitors to learn more about the life and work of the people who occupied the site, from the Augustinian canons in the 12th Century Priory to the family who occupied the mansion house in the 1920s.

The first floor exhibition room contains floor-to-ceiling windows giving impressive views of the ruins of the Priory and the landscape beyond it. There is a small play area for children in the centre of the room, and the walls are decorated with maps of the land around the Priory. Exhibits and interactive displays describe the changes in the landscape over the years since the Priory was established. Videos and stuffed animals illustrate the wildlife that occupies the Gardens, which provide a sanctuary for creatures within the industrial area that surrounds the site. In particular, there is a section about honeybees - the canons in the Priory would have kept bees, and honey is still produced on the land - Norton Priory Honey is on sale in the gift shop.

The Gardens are divided into two halves. Nearest the ruins, the land is somewhat like the grounds of the Priory would have been - there is a herb garden area containing medicinal plants, as well as grass, trees and wildflowers. On the other side, the layout is more like the grounds of the mansion house would have been - there is a Victorian Walled Garden, as well as trees and open spaces. The Norton Priory garden also houses the National Collection of Quince.

1In 1356, one of the canons went to St John's Church in Chester to become an anchorite.2The nearby Birkenhead Priory similarly benefitted from the profits of a ferry across the Mersey.3It was alleged that the canons had broken their vow of chastity, and that the Abbot was involved in forgery of coins.4In this interactive exhibit, he speaks with the voice of Brian Blessed.