The Lewis Carroll Centre and All Saints Church, Daresbury, UK Content from the guide to life, the universe and everything 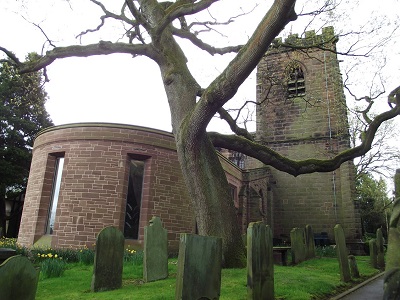 Lewis Carroll, or Charles Lutwidge Dodgson, is best known for the book Alice's Adventures in Wonderland that he wrote in Oxford, but his father was the rector at All Saints Church in Daresbury and Charles was born in the parsonage there in 1832. The Lewis Carroll Centre in Daresbury provides an accessible introduction to Lewis Carroll's life and work.

Daresbury is a village on the outskirts of Warrington, a town to the east of Liverpool in the North West of England. The Lewis Carroll Centre opened in 2012 and is run by the All Saints Daresbury Parochial Church Council. The Centre is an extension to the All Saints Church, providing the Church with level access and an accessible toilet as well as space to celebrate the life of Charles Dodgson. Entrance is free, although donations are welcomed. Tea and biscuits are available on a tray for visitors to help themselves.

At the time of writing (2016) the Centre is open from 10am each week Monday to Saturday and from 2pm on Sundays, although All Saints Church may be closed for events and services, so you should check the calendar before going there to ensure you can get the most out of your visit. There is a fairly large car park - some spaces are reserved for staff at a local company, but there are plenty of others, including spaces for Blue Badge holders. There is a shop inside the Church selling Alice merchandise, postcards and souvenirs, plus Fairtrade and local produce and Christian items such as Bible storybooks for children.

The Centre and Church

From the car park, visitors approach the Centre through the Church's Lych Gate. It is very atmospheric walking along the path through the churchyard that would have been very familiar to young Charles. Once inside the entrance foyer, the Lewis Carroll Centre is to your left, and the All Saints Church is to your right.

The Lewis Carroll Centre contains a series of panels describing Lewis Carroll's life, from his early years in Daresbury to his later life in Oxford. The panels include mention of the Alice in Wonderland books and his mathematical work and puzzles. The pictures on the panels also show examples of the photographs he took of famous people such as the Pre-Raphaelite Brotherhood, and the photos he took of his family and friends including Aunt Lucy using a microscope. The infamous image of Alice Liddell posing as a scantily clad beggar girl is also featured. There is information about his photography techniques, including the method he used to take a photograph entitled 'The Dream' - he half-exposed an image and then added more items before completing the exposure, so that the added items looked pale and ghostly compared to the people who were in the photograph for the whole time.

There are worksheets available for children to look at, and the bottoms of the panels contain cartoons, puzzles and games at just the right height for children1 to enjoy.

All Saints Church stands on a site that was used as a church since the 12th Century when the nearby Norton Priory was home to Augustinian monks. The current church tower dates back to 1550 but the rest of the building was constructed in the 1870s and is a Grade II* Listed Building. The Church welcomes anyone looking for a quiet place for reflection, but the main feature for Lewis Carroll enthusiasts is the stained glass window that was installed to celebrate his 100th birthday in 1932 - a memorial fund was established to raise money and it was designed by Geoffrey Webb, an artist who had also created windows for Manchester Cathedral and numerous other buildings2. The window was completed in 1935.

The Lewis Carroll Window is in the Daniell Chapel, which is to the right hand side of the Church if you are looking towards the altar. The main panels of the window depict the Nativity with Lewis Carroll kneeling next to golden-haired Alice and paying homage to the baby Jesus. At the bottom of the main panels, text from Lewis Carroll's poem 'Christmas Greetings' is depicted, along with characters from Alice in Wonderland as they were drawn by John Tenniel.

The village of Daresbury itself is worth wandering through, and if you wish you can walk, cycle or drive the 1.5 miles to the site of the parsonage where Charles Dodgson lived until he was 11. The house was built in 1819 but was too far from the Church for later rectors to want to live there, so it was empty in 1883 when it burned to the ground. The site is now owned by the National Trust, and the places where the walls would have been are marked out by iron railings.

1And similar height adults.2He 'signed' the windows by including a spider's 'webb' in each one.