Eleanor Fortescue-Brickdale - Artist Content from the guide to life, the universe and everything 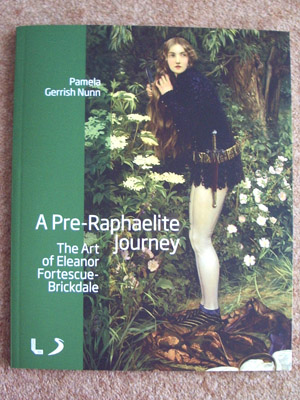 Eleanor Fortescue-Brickdale is often referred to as the last of the Pre-Raphaelites, as her style of art generally followed the style of paintings of legendary scenes in vibrant colours that had originated in the 1840s and was made famous by Dante Gabriel Rossetti, John Everett Millais and several other men.

Mary Eleanor Fortescue-Brickdale was born on 25 January, 1872 in London. Her family were fairly well-off, so she and her sister had a governess, and her two brothers went to a good school. Her talent for art was recognised and encouraged from an early age as her father was an amateur painter who had known John Ruskin at Oxford University in the 1870s.

When she was 17 Eleanor attended Crystal Palace School of Art, and her talent was further recognised - she won a scholarship in her first year and a silver medal for watercolour painting in her second year. She moved to the more prestigious St John's Wood School of Art some time after her father died1 in 1874 and then made applications to the Royal Academy Schools. She was admitted on 10 January, 1895 on her third attempt.

Eleanor's first published work was a black and white illustration for an article about 15th Century Italy that appeared in Pall Mall Magazine in 1895. It was well received, so she found she was able to earn enough to support herself by drawing for magazines whenever she was not in classes. She was also commissioned for tasks by her family and friends, such as designing a Land Registry Certificate for her brother's office.

Her illustrations for magazines that were popular with wealthy people led to commissions from readers for landscapes and portraits to adorn stately homes. She was also selected to create the illustrations for a new edition of Walter Scott's Ivanhoe - the portraits of the characters were noted for being strongly influenced by the distinctively vivid Pre-Raphaelite style.

As well as drawing, Eleanor painted in oils and watercolours, and exhibited her work regularly. She also sold paintings from the studio she obtained in Holland Park, London. Her repertoire included some work in other media - she joined the Pastel Society and exhibited there in 1904, created a sculpture in the same year, carried out design work for Liberty's and designed stained glass windows, too. From 1905, she became a teacher, working first at King's College for Women and then in 1910 at the Byam Shaw and Vicat Cole Art School, which was co-founded by her friend and King's College colleague, John Byam Shaw.

The subject matter Eleanor chose for her works came mainly from English Literature as she was less familiar with the classical literature that her male colleagues were more likely to have been taught. Hence she was selected to illustrate books of works by Shakespeare, Tennyson and Robert Browning, and was also inspired by the Bible and tales of the court of King Arthur.

Although Eleanor was somewhat influenced by her gender in terms of the education she had had, her art was not as restricted as that of earlier women artists, who had been expected to focus on domestic scenes. There were other women artists whose art fitted into the Pre-Raphaelite style, such as Evelyn De Morgan, who died in 1919, and Annie Louisa Swynnerton, who died in 1933, but Eleanor was considered by several critics to be one of the most talented women artists of the time. Her work also compared well to that of contemporary male artists, as her exhibitions were popular, and her commercial success was a testament to the wide appeal of her skill.

A fine example of her style and skill is the oil painting The Forerunner from 1920. Named after and inspired by the 1902 novel The Romance of Leonardo da Vinci The Forerunner by Dmitri Merejkovsky, it depicts Leonardo da Vinci demonstrating a model of his design for a flying machine. The painting is filled with bright reds, blues and golds, and fine details, such as patterns on the clothes of the people watching, and frescoes in the background of the scene. The women are painted in the static, posed style of da Vinci, but the men are depicted in a modern, realistic style, looking on with curiosity, laughter or boredom.

During the First World War, Eleanor contributed to the war effort by selling paintings to raise funds for charities including the Red Cross. After the war, she continued to have some success and fame, as a book was published in 1919 entitled Eleanor Fortescue Brickdale's Golden Book of Famous Women, with descriptions of the women provided by well-known writers including Tennyson. She continued teaching, drawing for magazines including Maternity and Child Welfare and Illustrated London News, illustrating books, and designing memorials to those who died in the war.

Perhaps as a result of working so hard, in 1923 Eleanor fell ill. It is not known what the illness was, but it affected her hands, so she was unable to draw or paint. It also affected her eyes, so when she recovered enough to be able to hold a pencil or paintbrush she had difficulty with small designs. Instead she found it easier to produce larger works, particularly designs for altarpieces and stained glass windows in churches around the Bristol area.

Eleanor's work is owned by a number of different people and organisations around the UK and a selection of her work is available on the BBC Your Paintings website. The Ashmolean Museum in Oxford held a retrospective in 1972, including the painting Time the Physician from the Museum's collection. Lord Leverhulme of Port Sunlight had purchased The Forerunner in 1920 so in 2012 there was a retrospective of her paintings and drawings displayed in Port Sunlight's Lady Lever Art Gallery. In addition, a book2 describing her life and cataloguing her work was commissioned to commemorate the occasion and bring her popularity into the 21st Century.

1He died while mountain climbing in Switzerland.2A Pre-Raphaelite Journey by Pamela Gerrish Nunn.