Travelling from Edinburgh to London Content from the guide to life, the universe and everything 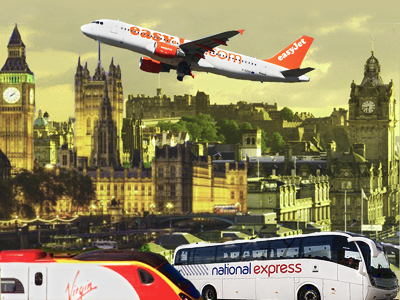 If you have visited Edinburgh you may wonder why anyone would want to leave. It has the largest expanse of Georgian buildings, a castle, a lovely old town and a great selection of pubs. However for various reasons the people of Edinburgh are often forced to travel to London.  Once this was a simple matter, but now there are a bewildering array of options for the traveller.

The distance from Edinburgh to London is about 330 miles (530km) as the crow flies1. To travel by car, the route is about 400 miles (670km) long and would take about seven and a half hours (on a good day, with no roadworks and avoiding rush hour). Another option (which would take even longer) would be to cycle - National Cycle Route 1 links the two cities. However, if you want/need to use public transport instead, here are some options.

For that 9am Meeting

Travelling on business? Need to be in London by 9am? Oh dear. Never mind. The downside is that you have a selection of the worst that public transport has to offer. The upside is that you probably aren't paying for it all yourself.

The Sleeper: When Money is No Concern

It may surprise you to find out that the most expensive, and most convenient, option is the train, and not just any train: The Sleeper. The UK is a small country and as such there are very few rail journeys long enough to last a full night's sleep. The sleeper train, runnning from Edinburgh to London is the one exception. You turn up at Waverley Station at 11pm, enjoy a drink in the pub, board your train and go to sleep. When you wake up you are in London, it's 7am, and you are refreshed and ready to do a day's work. And you can take your bicycle - there is nothing that confuses Londoners more than their Scottish colleague turning up on a bicycle. The downside of course is cost - if you book in advance you may be lucky, but realistically you are likely to spend a lot of money to get a berth on this train. Not that it matters to most users of the sleeper as they are travelling on expenses.

Early Morning EasyJet: When Money is Definitely a Concern

If your employer is less generous you will find yourself at Edinburgh Airport at 5am and shivering, waiting to check into the 6.20am EasyJet2 flight to one of London's airports. Edinburgh Airport is of course not actually in Edinburgh - it's about 5 miles out of town.   When your colleague on the sleeper is waking up at Euston Station, you will find yourself at one of London's airports. There will be one defining feature of this airport - despite its name being 'London xxx Airport' you will find that it is not in London. It may be in Gatwick, Heathrow, Luton or Stansted, but the one thing that these places have in common is the fact that they are nowhere near London. You have to drag your bleary-eyed self to a train station and spend another £20 or more on a ticket to London itself. At the end of the day you'll have to repeat the entire exercise again.

It is a little-known fact that there is an airport actually in London - only 30 minutes away from Central London. Several airlines operate flights from Edinburgh, and at least one offers arrival times before 9am. The fares aren't as cheap as to a more distant airport, but with advance booking it's affordable - especially so if you are spending someone else's money.

If you can arrange your meeting for 10am rather than 9am, you have a whole other option.  Make it to Waverley Station by 5.40am (roughly the time you'd be checking into Edinburgh Airport for an EasyJet flight) and you can catch the train that will get you to London for 9.40am. Only stopping at Newcastle, this train has many advantages over the EasyJet flight. Firstly it will take you from Edinburgh to London, instead of from 'somewhere near Edinburgh' to 'somewhere near London'. Secondly you just have to sit in a seat for the journey, without having to trail from check in desk to flight, to train, to another train, to London. On the downside it's extortionately expensive, because it's a peak fare to London.

If you don't need to arrive in London for 9am, things are a bit cheaper. With advance booking and flexibility in timing your arrival, you'll be able to get a cheap train ticket or plane fare.  This is especially good if you aren't travelling on business and are spending your own money.

The Cheapest Way? - Go by Coach

At the time of writing the cheapest way to get from Edinburgh to London is by Megabus, a low cost coach option that advertises tickets for as little as £1.50. If you book in advance you should be able to get a cheap deal. They also have an overnight sleeper so you can lie down. National Express is another company that offers relatively cheap coach transport from Edinburgh to London. What's the downside? Well, the journey takes about 10 hours, which rules out a day trip.

Additional information:
1That's about the same distance as London to Frankfurt, New York to Toronto, or San Francisco to Los Angeles.2Other airlines offering flights arriving before 9am are available.