The English Smoking Ban of 2007 Content from the guide to life, the universe and everything 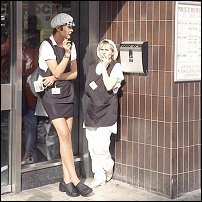 A smoke-free England ensures a healthier environment,
so everyone can socialise, relax, travel, shop and work free from second-hand smoke.
– Smokefree England

On 1 July, 2007, a ban on smoking tobacco in any enclosed public space, or in the workplace, was implemented in England; anyone found breaking it would incur an on-the-spot fine of £50. There had been prior warning by the UK Government of this eventuality, and massive advertising campaigns were conducted to alert the general public. In fact, much of the United Kingdom had imposed a smoking ban beforehand. Scotland led in March, 2006; Northern Ireland and Wales followed in April, 2007. So everyone pretty much knew that England was to follow suit shortly after. Even so, there was massive uproar when the smoking ban took effect. But why have a smoking ban in the first place?

Smoking bans are brought about, for the most part, with one major reason in mind: health. In England, the Department of Health, together with the National Health Service, began an attack on heart disease in 1997 – under the title of the National Service Framework for Coronary Heart Disease. Research had indicated that smoking was a leading factor in heart disease, one of the major killers in the country due to a high percentage of the population being smokers. In the early 1990s, the World Health Organisation reported that the UK had one of the highest mortality rates from heart disease in the world; so action was needed. Later findings showed that in the 1980s some 39% of English people were smokers. While this had decreased by 2005, approximately 25% of the adult population still smoked tobacco.

A cigarette is the perfect type of a perfect pleasure. It is exquisite, and it leaves one unsatisfied. What more can one want?
– Oscar Wilde

In 2000, the UK Government White Paper 'Choosing Health' initiated a comprehensive tobacco control scheme, piggybacked onto programmes already in place. These included strategies relating to general well-being, like 5 A DAY, those that warned of the dangers of passive smoking and second-hand smoke, as well as the NHS smoking cessation advice scheme. Complementary bans helped enforce the planned smoking ban, such as stopping tobacco companies advertising, ensuring the addition of 'graphic' warning labels on tobacco products, changing how tobacco products are displayed in shops, and altering the age limits on purchasing tobacco products. The smoking ban of 2007 was just one of the strategies, along with all of the above, that would hopefully culminate in the eventual goal of a smoke-free England.

The smoking ban meant non-smokers in England could enjoy going to pubs without leaving smelling like a used ashtray; and eat at restaurants without tasting tobacco smoke with their food. And many parents were also thankful of the fact that their young children would not be so readily exposed to the dangers of passive smoking. Public transport would smell reasonably better, and clothes (even the ones on the rack in a shop) wouldn't smell like they'd been in a house fire. Action on Smoking & Health UK, non-smokers, those trying to kick the habit, and many advocates of healthier living, were all looking forward to a fresher, and perhaps even cleaner, England.

The ban will be a blow to those of you who like a post-coital cigarette – you will just have to stop having sex in shopping arcades and train stations and do it in the privacy of your own home.
– Shazia Mirza, comedian

However, with the ban came opposition to it. It was not only many smokers who deplored the actions of the UK Government in enforcing the smoking ban. Many different community groups felt the Government had gone too far. Anti-smoking ban organisations quickly sprang up across the country, like 'Smoking Ban Stinks'. There was a belief that the new law was just another action by the UK Government heralding a true 'nanny-state', and the final nail in the coffin of a national institution – the English pub.

Many pub-going smokers, and some publicans themselves, were dismayed at the smoking ban. Pubs had a particular atmosphere pre-smoking ban, which included the mixed aroma of stale tobacco, beer, pork scratchings and the haze of smoke that hung in a dimly lit room full of people spouting terms like 'guvna' and 'blimey' – not only a tourist attraction but a way of life. As the ban went into action, in one fell swoop all that was gone. Having a pint and a fag1 (which went hand-in-hand) at the bar was to be a thing of the past.

I won't be pushed into a corner by this government. It may tell you to smoke outside but I won't stop... They'll be banning  booze  in pubs next!
– James Dreyfus, actor

Publicans also had to deal with the fact that a good majority of their clientele smoked. If these smokers couldn't enjoy tobacco at the pub in comfort, they'd leave the pub to smoke in the privacy of their own home – and drink there too! So, with fewer customers many publicans were forced to close their doors or become more like restaurants – albeit with a bar, and in some cases a play area for kids. The face (and inside) of the traditional English pub changed forever, perhaps due in part to the smoking ban2.

So where did smokers go? Well, some went back to their own homes and smoked out of the public eye. But many simply went outside. To give their smoking clients the opportunity to still enjoy the aforementioned 'pint and fag' without breaking the law, publicans quickly had to find space for outside smoking shelters, cigarette bins and, due to the invariably cold and wet English weather, outside heating – expensive, to say the least. And pubs weren't the only places that had to provide this service to ensure smokers would be catered for.

The front (and back) entrances of pubs, office buildings, hospitals, schools, government buildings – in fact, just about any building – were soon littered with smokers. Cigarette butts quickly littered the streets, and just entering a building meant running the gauntlet of the smoking crowds. For many, this was not what being 'free from second-hand smoke' was all about. Some employers and public service providers had smoking annexes or shelters built for employees or visitors who smoked, but these were invariably a good trek away from main building – and weren't particularly pretty, in all honesty. In many eyes the smoking ban had effectively caused a blot on the landscape. Even with the potential health benefits associated with the ban (such as smokers preferring to stay inside and not smoke, rather than brave the elements), the smoke had even clouded the judgement of the new law's supporters somewhat.

The NHS felt the heat, too. Many hospitals (in particular psychiatric units – not unlike pubs) found themselves caught between a rock and a hard place. Many patients and their carers were concerned that not being able to smoke would cause harm. Instances of smoking actually being beneficial to patients' recovery were reported. On some general orthopaedic wards, many smokers felt the impetus of getting up out of bed to have a cigarette helped their determination to get better3. So, the ban was not without its problems and critics, even from within the NHS.

Some critics of the ban even cited the fact that in 1941 the Nazi Party of Germany prohibited smoking in every German university, post office, military hospital and office. This was due in most part to the work of Karl Astel's Institute for Tobacco Hazards Research – and the support of Adolf Hitler. Thus, as might be concluded by the overly melodramatic, the UK Government was likened to the Nazi Party! Perhaps they had forgotten that in 1604 King James I had his work A Counterblaste to Tobacco published, in which he bemoaned tobacco as 'a stinking and unsavorie antidot'. So the English king was perhaps one of the first anti-tobacco lobbyists.

Whatever the critics of the ban came up with, though, from the loss of the English pub through to the loss of free will, smokers still wanted to enjoy their 'antidot'. Even with a smoking ban, ways and methods were quickly discovered, with loopholes in the law and the advent of new technologies enabling the modern English smoker to still enjoy a cigarette down the pub, at work, or even at a restaurant. Although it was now illegal to light up in a public place, there was no law against using nicotine-based products. Thus, the 'e-cigarette' rapidly found its way onto the market.

When it's freezing outside, and chucking it down with rain, it's a good alternative to going outside for a cigarette.
– Chris Giles, manager of the Butler's Arms in Sutton Coldfield

Shaped not unlike a real cigarette, the electronic cigarette contained a tiny heated element which was activated when the smoker inhaled from the end of the tube as they would a cigarette. A chamber in the e-cigarette held a small amount of liquid nicotine which then passed over the heated element – in turn changing the liquid into a vapour. This nicotine vapour was then inhaled, giving the smoker a similar satisfaction to that they would get from a normal cigarette. One added 'bonus' was that the e-cigarette also exhibited a little red glowing tip – so it even looked like you were smoking4. And you could do it inside, blatantly flouting the new law – an idea that appealed to some sections of English society.

The UK Government had perhaps taken a risk with the 2007 smoking ban, with many of the voting public being smokers, or those who sustain a living from smokers and their related practices. In mid-2008, however, research suggested that smoking-related disorders (such as heart disease and lung cancer) would dramatically fall throughout the following ten years, so long as the momentum of the smoking ban continued. And research indicated that the ban also significantly helped many people to quit the habit. Regardless of the statistics, though, some sense of loss was felt for the change that came about to the traditional pub. The 'gastro' pub seemed to be the future of socialising for the new, comparatively smoke-free, England. Even so, perhaps the poetry of William Wordsworth was all that inspired the UK Government to enforce the new law:

This city now doth, like a garment, wear the beauty of the morning; silent bare, ships, towers, domes, theatres and temples lie open unto the fields and to the sky: All bright and glittering in the smokeless air.

1English slang for a cigarette.2There was so much concern about the decline of the public house that many felt the smoking ban should be overturned.3This Catch-22 situation was ironic to a tee, with some doctors even prescribing (in a roundabout sort of way) cigarettes to their patients – in direct contradiction of the stop-smoking policies of the Department of Health.4However, there were concerns over how the inhalation of nicotine vapour affected the 'smoker'.