A Canal Walk - the Corbally Naas Branch of Ireland's Grand Canal Content from the guide to life, the universe and everything 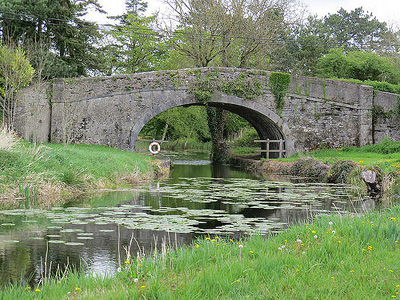 This is a pleasant walk through the countryside of County Kildare, famous for its horses. It is a linear walk, starting in one location and ending in another, so you will need two cars, unless you can persuade someone to drop you off at the start and collect you at the end1. The walk is 13km (8 miles) in length, but could be shortened to 9km (5½ miles) if you don't feel able to complete that distance. It follows an old abandoned canal and is entirely on the level with no ascent. It is not suitable for wheelchairs or child-buggies, though, as there are some narrow gateways and some of the paths are somewhat rough underfoot, but it should be easily manageable by anybody capable of walking the distance. There is some mud so stout shoes are needed.

All the distances in square brackets are from the start of the walk. If you have a smartphone that can track the distance you have walked, it will make following these instructions easier.

What You'll See Along the Walk 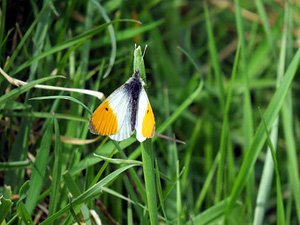 The canal is a good place for wildlife. You may see swans, ducks and herons. Butterflies can be found all along the canal - small tortoiseshells, orange-tips and red admirals in the early summer and speckled woods in late summer and autumn. There are grey squirrels in the trees beyond Naas. You'll also see farm animals including sheep and horses. Kildare is Ireland's premier horse-rearing county.

Plants along the canal include cowslips and primroses on the banks and water lilies and bulrushes in the water itself.

Getting to the Start

Take exit 9 from the N7, following the signs for Naas2 until you see a sign for Sallins. When you arrive in Sallins, turn right immediately after crossing the canal while still on the bridge.

Park one car there - there's plenty of parking along the banks of the canal just at the bridge.

Head south from Sallins into the centre of Naas. Turn right onto the main street, then go straight on towards Kilcullen. About 4km outside of Naas, turn right towards Two Mile House3 and go through the village. About 2.8km after the village there is a crossroads. Turn right here. After another 1km, the road does a bend to the left and there is a low railing straight in front of you. The abandoned harbour is hidden in the trees and bushes behind the railing.

You can park on the edge of the road or on the grass at the railing - there's room for about six cars and you'll rarely find anyone there. It is an isolated spot in the middle of the countryside. The entrance to the harbour is the second gap in the railings. You'll know you're there because there is a large sign.

If you're relying on the map or SatNav, bring it with you on the walk so that you can repeat the car journey at the end of the walk.

The harbour itself is the terminus of the Naas and Corbally Line, an abandoned side branch of the Grand Canal. Although the canal is no longer navigable, it is still looked after by Waterways Ireland who keep the path in order and make sure the weeds in the canal don't get too rampant. The canal was built in 1811 for transporting farm produce. It was originally intended to go further but there was only enough money to bring it this far. As a result, the harbour is in the middle of nowhere. There is one ruined building but nothing else.

Its main commercial use is said to have been transporting malting barley, used in the making of beer, to the mill in Athgarvan - since the harbour is 3km from there, horse-drawn carts must have been used for the last stretch of the journey. the canal became obsolete in the 1850s with the introduction of railways. 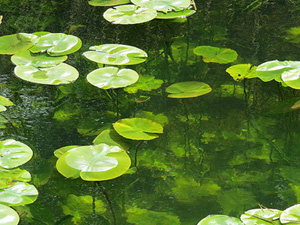 3. Start the walk by going to the left of the harbour - there's a Waterways sign and a gap in the fence. Follow the left bank of the canal as it leaves the harbour. If you have to open any gates, make sure to close them after you. At some large gates there are smaller gates for pedestrians to the side. The first stage is a contour canal - it is all at the same level, has no locks and follows the contours of the land, so that it bends a lot. Pass Mooney Bridge [1.0km] and Hoare Bridge [2.1km]. 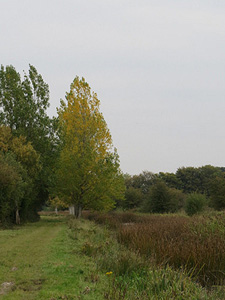 4. At Connaught Bridge [4.8km], cross the bridge, then leave the bridge by turning right and loop back under the bridge, continuing on the right bank. You may notice a lake/flooded quarry on the other side of the canal [5.3km] and the back of a Lidl store [6.1km].

5. At Limerick Bridge [6.6km], you've a choice. The more able-bodied can go on the route 5A that stays by the canal, but you will have to be prepared to climb a fence later on. Those who prefer not to do any climbing should take the easier route 5B which temporarily leaves the canal.

5A. For the slightly more strenuous route, cross the bridge, then go down to the left off the bridge. Go under the bridge, wriggling past the barrier fence. Continue along the left bank of the canal. The going gets slightly rough in places, but eventually you reach a metal gate [7.0km]. If you're lucky this gate will be unlocked. If it is locked shut, climb over the fence. You are now on the busy R445 road. Turn right and walk along the road for 50m to the junction where you meet those who took route 5B.

5B. If you decided to take the easier route, don't cross the bridge. Continue along the road for about 600m until you reach a junction with a major road, the R445, where you rejoin the route by turning right.

6. You are now half way along the walk. The canal comes to a dead end at the R445, the Naas to Newbridge road (formerly the busiest road in Ireland when it was the Dublin to Cork/Limerick road). There was no attempt to build a raised bridge here, so the canal is blocked by the road. It continues at the other side of the road, but boats cannot pass this point which explains why everything so far has been unnavigable. From here on, boats can actually travel the canal although you're not likely to meet many.

7. Continue along the R445 until you come to the ruins of Jigginstown House. The route continues directly across the road through a gateway, but first take a few moments to look at the ruin. This was reputedly the longest house ever constructed in Ireland at 448 feet (137m). It was built by Thomas Wentworth, Earl of Stafford and Lord Deputy of Ireland, in the 17th Century with the intention of being a residence for King Charles I on his royal visits to Ireland, although it was never used for that purpose. The house would originally have had gardens in front of it, where the road is now. Wentworth later fell out of favour with the King, was found guilty of treason and was beheaded.

Carefully cross the very busy road (if the traffic is bad, it may be safer to continue on until the traffic lights and cross there). Go through the gateway opposite Jigginstown House. Follow the path which bends round to the right, rather than crossing the pedestrian bridge [7.3km].

8. Go under the road bridge and under the next bridge (Ploopluck Bridge).

You soon arrive at Naas Harbour [8.9km]. Go around the harbour basin and at the far side you will reach Basin Street. If you want, you can now take a break - walk up Basin Street and after about 100m you'll come to the Main Street of Naas where there are pubs and coffee shops. Tired members of the party have the option of waiting here in a pub while the others finish the walk. Return down Basin Street after the break.

9. Continue along the canal, keeping the water on your left. You're now starting on the Naas branch of the Naas and Corbally Line. This has quite a different character - there are locks so the canal doesn't need to follow the contours and is much straighter. The trees on either side are also much taller making the route more shady.

10. At the next bridge [9.2km], cross to the left side of the canal. All the locks are clearly signposted so you'll have no problem knowing where you are. Pass the 5th Lock, 4th Lock, Tandy's Bridge, 3rd Lock, 2nd Lock and the giant Leinster Mill, a former Odlums flour mill which is on both sides of the canal. Go under the road bridge and the motorway [11.4km].

11. Next is the 1st Lock and just after it a bridge [11.7km]. Cross the bridge and continue along the right bank of the canal.

12. Go under the railway bridge [12.1km]. Almost immediately [12.2km], the Naas and Corbally Line joins the Grand Canal. This canal goes all the way from Dublin to the River Shannon in the middle of the country.

13. The path takes a sudden turn to the right away from the canal through a gap in the trees [12.4km]. Cross the grass to the houses and follow the road left through the estates of Sallins Pier, Sallins Wharf and Osberstown Court. 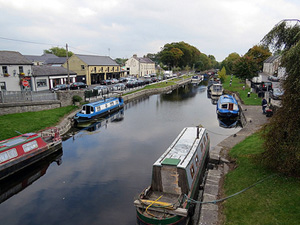 Sallins has a number of pubs offering food. 'Lock 13', right at the bridge, describes itself as a 'gastro-pub' and its food is highly recommended, although there isn't a great choice for vegetarians. After refreshment, drive back to Corbally Harbour and collect the other car.

1There's a railway station in Sallins at one end of the walk but no way of getting to the other end by public transport.2Naas is pronounced to rhyme with Race.3Named because it is two miles from Corbally Harbour.