The Grey Heron Content from the guide to life, the universe and everything 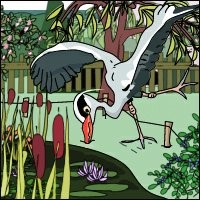 The first light of dawn illuminates a suburban garden somewhere in the British Isles. An eerie sentinel stands motionless in the shallows of an ornamental fish-pond. This creature is by far the largest bird that is likely to appear in such a place. His plumage is steel grey, with a downy white underside. He teeters on slender legs a metre long, and his body measures as much again, with its sinuous neck and dagger-like yellow bill.

We are watching the Grey Heron (Ardea cineria), and he can keep this up for minutes on end. The curling black feathers of his crest tremble above his head as he watches the water, but otherwise he remains improbably still. Sooner or later, an oblivious goldfish will swim into range and the fearsome beak will strike with astonishing speed. A small fish will disappear whole; a large one may well be speared through. If a frog is unwise enough to reveal itself, it is very likely to perish in the same ruthless way.

The modern garden pond represents a new opportunity for the heron. Whether we judge him to be a despicable murderer or a fascinating visitor will quite probably depend on the price of our fish and the sensitivity of our children. Before further consideration of domestic intrusion, however, it's instructive to take a more general look at the life and behaviour of this remarkable bird.

The Grey Heron is a wader belonging to the family Ardeidae. Its range covers most of Europe and western Asia, excepting only their northernmost extremities. It has an American cousin in the Great Blue Heron, a rare European relative in the reclusive Bittern and a somewhat commoner (though rather smaller) one in the Egret.

In former times, herons were hunted for food. An English publication of 1545, entitled the Propre New Booke of Cokery, noted that herons, cranes and other large waterfowl could be eaten throughout the year, but were best hunted in winter. Falconers once sought out the heron, too, because a bird of its size and power provided a stern test for a hawk. Heron-hunting appears to have waned only with the coming of the gun; a creature as slow and passive as a heron is no sporting target for the modern weapon.

Herons usually nest in trees in waterside locations, often as single pairs but sometimes in small colonies. Occasionally they will build nests at water level in reed beds, but in either case the structures are large, ungainly platforms fashioned from sticks. The eggs are laid in spring, and incubated by both parents. They take about four weeks to hatch, and the young leave the nest after about eight weeks. In common with most other large birds, herons choose mates for life and tend also to adopt a lifelong nest site.

The breeding population of herons in the United Kingdom has increased steadily in recent years, with a 2003 survey locating more than ten thousand nest sites (known as heronries) and an estimated fifteen thousand pairs. For most of the 20th Century, a stable population of about four thousand pairs was assumed.

These figures can be considered more than usually reliable, since the counting of herons has a significant history. In 1928, British herons were the subject of the first national census of a single avian species undertaken anywhere in the world. The organiser was Max Nicholson, then still an Oxford undergraduate but soon to become the pioneer of scientific ornithology. He continued to work in the field almost until his death in 2004 at the age of ninety-nine years.

In Britain, heron populations appear to be moderated by winter starvation. Herons are very predominantly water-feeders (though some adapt to foraging on farmland for small rodents), and they are unable to break thick ice. Numbers are thought to be rising because herons have developed a partially feral habit, with persistent freezing being rarer in the towns than in the countryside1. These adaptable birds can also hunt successfully in salt water, provided that it is not too turbid, and they are a common sight in particular coastal localities. Herons have even been observed feeding in unpromising urban settings, such as culverts in cities.

The heron in flight is a striking spectacle, and seeing one take to the air is particularly exhilarating. Its adult wingspan is around 1.5m, and its legs trail behind, further emphasising its great size. Its very large wing area, coupled with a low body weight2, allows it to achieve considerable height in a very short time, particularly when startled.

The attitude of the flying heron's neck (bent into an 'S' shape with the head drawn back) is characteristic, and distinguishes it readily from storks, which fly with the neck extended straight. Herons are strong, though slow, fliers, and a feeding range of 20 or even 30km is within their capability. Ringing of birds has also proved that some individuals spend their summers in Britain or the Benelux countries and their winters in Spain or Portugal, although most herons stay in one place all year round.

Herons have a special patch of feathers called 'powder down' on their breast and rump. These feathers disintegrate when rubbed, providing a fine dust that is thought to aid preening. The third toe is adapted with a spur, and the bird uses this to comb its plumage.

The male grey heron enacts a courtship dance in which he extends his neck straight upwards and then progressively bends it backwards until his head touches his back, the bill remaining vertical throughout. The sexes look similar, and both males and females exhibit the same range of raucous calls. The most common call is a monotonous booming croak, sometimes phonetically rendered as fra-ank or krornk.

The Scourge of Suburbia?

Back at the garden pond, several methods have been suggested to frustrate the heron's fish-harvesting habits, though it's far from clear whether they are really effective. Some owners seek fish-species intelligent and agile enough to keep out of the heron's way, and the golden orfe appears to be the commonest suggestion, but in a small decorative water-feature there is really nowhere to hide.

For ponds of that kind, physical barriers are the usual defence. Steep-sided, deep ponds will present more difficulty than ones with shallow margins. Obstructions around the edge, such as fine trip-wires or loose stones, might put the heron off. Fine plastic netting (of the kind sometimes used to train climbing plants) stretched over the pond is said to be effective, though it must surely also be unsightly. Since herons feed mainly at dawn and dusk, temporary deployment is a possibility for those with sufficient patience.

The trip-wire idea has also been tried in larger ponds with a natural aspect, this time erecting it in the water at around a foot below the surface. In addition to this, a section of drainage pipe sunk in the depths provides the fish with a bolt-hole into which no heron can reach. The person who described these devices, though, admitted that the feeling of having done his best gives him more consolation than any belief in improved protection.

If the pond is yet to be constructed, it could be worth noting that a location close to a house or another tall structure is less heron-prone than one with space all around it. This is thought to be because the birds need room to get airborne, and possibly also because visibility of the pond is then better screened from above. An alternative explanation in terms of a fear of predators probably has less and less foundation, since herons appear to be learning that they are large enough to look after themselves. Some have even been reported to stand their ground against onrushing dogs.

The ubiquitous plastic heron (disregarding its plebeian image) might be expected to help, because birds seem to avoid water where another is already present. The heron's habit of standing stock-still could further improve the chances of a convincing facsimile. Systematic observation, though, suggests that herons may actually find ponds more quickly if these dummy birds are present. Perhaps they are intelligent enough to spot the fake and to equate it with the certain presence of food.

The most extreme method of guarding the fish, that of killing the heron, is illegal in Britain. The birds are protected under the terms of the 1981 Wildlife and Countryside Act, and anyone harming one or attempting to do so is liable to imprisonment or fines. Government licences permitting the destruction of herons have been granted to commercial fisheries in rare cases of last resort, but there is no prospect of such a license ever being issued in respect of ornamental fish.

Herons are undoubtedly a problem for the breeders and fanciers of exotic fish (koi carp, for instance). Their usual answer is to forego the aesthetic appearance of the pond in which they raise their stock, and to cover it with a strong mesh.

For the rest of us, fighting the heron is probably futile. Once a heron has found a food source, it will return to it systematically until it has exhausted it. This means that a first raid is often followed by total depredation. Some herons evidently dislike the taste of goldfish, but their instinct to work out a pond is so strong that they will continue to kill its occupants in the hope of finding something better.

Even if the adversary is kept at bay, anxiety about this threat to fish must detract from the pleasure of owning them. Put another way, while we have to be lucky always, the heron only has to be lucky once.

The recommended course is to buy cheap goldfish, enjoy them while small, and replace them with alacrity when their growth renders them irresistible to the passing predator3. The corollary is that the heron itself, far from being an interloper, should be seen as part of the ecosystem of our garden ponds, and moreover an imposing and inspiring one.

1In recent years, some birds have taken to perching incongruously on the ridges of house roofs and on chimney-pots, presumably in order to exploit the vantage point.2Herons are deceptively light at around 1.5kg.3For those who find this approach unacceptably cruel, the creation of a fish-free wildlife pond could be an appropriate alternative.