The First Woman in Space - Valentina Tereshkova Content from the guide to life, the universe and everything 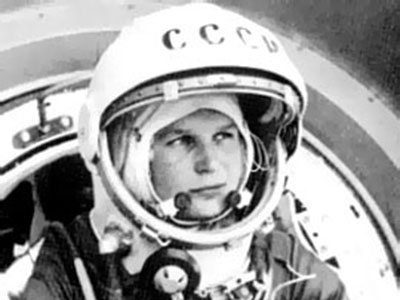 At the beginning of the 1960s, America and the Soviet Union were locked in a space race. The Soviets had already won one round by putting the first man in space: Yuri Gagarin in 1961. But what about the first woman? In May 1962 cosmonaut Gherman Titov and cosmonaut chief Kamanin visited Washington and attended a barbecue at the home of astronaut John Glenn. Kamanin learned from Glenn that the first American woman would be included in the Mercury programme by the end of 1962. The Soviets were determined to beat the Americans in this race, and on 16 June, 1963, they succeeded: they launched the first woman into space. She was Valentina Tereshkova, but what do we know about her and her achievements?

Valentina Vladimirovna Tereshkova, known as Valya, was born on 6 March, 1937, in Maslennikovo, a village near the Volga river, about 277 kilometres north east of Moscow. Her father had been reported as missing in action during the Finno-Russian war of 1939-40 and her mother worked in a cotton mill to support her three children. Valentina was the second child, with an older sister and younger brother. She didn't start school until the age of eight and had to leave in 1953, at the age of 16, to start work. She became an apprentice in a tyre factory and later joined her mother in the cotton mill. However, Valentina was an ambitious and determined girl and continued her education by correspondence course.

She joined the DOSAAF Aviation Club in Yaroslavl, which was an auxiliary organisation of the Soviet Air Force. It was here that she became interested in parachuting, making her first jump in 1959. She set up the Textile Workers Parachute Club and became secretary of the local Young Communist Party (Komsomol). After Yuri Gagarin became the first man in space in 1961, Tereshkova volunteered for the Soviet space programme.

Cosmonaut chief Kamanin was a founder of DOSAAF, so it was natural for him to go looking for likeable girls in their aviation clubs. The qualifications were for females who were under 30, under 170cm tall, under 70kg in weight, physically fit, ideologically sound and who had completed parachute training of at least six months. Piloting experience was not necessary, because the Vostok spacecraft was automatic and the occupant was considered a passenger. But parachute training was a requirement because, at this time, the cosmonauts had to jump from their capsules before they hit the ground. Tereshkova qualified because she'd made 126 parachute jumps.

58 candidates were selected, of whom 40 passed the paper review and were called to Moscow for interviews and physical tests. Tereshkova was one of five women selected as cosmonaut candidates on 16 February, 1962. She was the least qualified, as the others included an engineer, Ludmilla Solovyova, and pilots Tatyana Kuznetsova and Valentina Ponomaryova.

All five underwent a course of training that included weightless flights, parachute jumps, isolation tests and centrifuge tests. Although Tereshkova had difficulties with rocket theory and spacecraft engineering, she excelled in the physical training. The women then entered further training including parachute jumps and piloting. They were commissioned as lieutenants of the Soviet Air Force and Tereshkova became a full member of the Soviet Communist Party.

At first, a dual flight with two women cosmonauts was planned, but that idea was dropped and a male cosmonaut, Valery Bykovsky, substituted for the second woman. Final selection for the flights took place on 16 November, with Tereshkova and Ponomaryova as the candidates. Although Ponomaryova had the better test results, the Communist selection board were shocked by her replies to some of the questions. Soviet Premier Kruschev himself made the final selection, preferring Tereshkova because she was a good communist and a factory worker from a humble background. She was good looking, rather than beautiful, with black hair and plump cheeks, and was well liked by her colleagues.

On 14 June, 1963, Valery Bykovsky was launched in Vostok V, and Tereshkova followed in Vostok VI two days later. The two spacecraft came within three miles (5km) of each other and the cosmonauts exchanged communications. Although Soviet and European TV viewers were shown pictures of Tereshkova smiling, there were problems with the mission, which led to her return to Earth being delayed.

Some Soviet scientists alleged Tereshkova had emotional problems. One said she didn't want to go, that she became hysterical, panicked and had to be strapped in against her will. This is most unlikely. Months of tests and training would have shown up emotional problems and, if Tereshkova had lost her nerve, she could have given way to one of her colleagues. Her words on take off were famous: 'Hey, sky out there! Take off your hat!' and indicate a positive attitude. It is more likely she threw up in space, possibly due to eating the dry space food, and suffered from cramp and pressure sores, but she did her best to complete her programme.

It was not until 2007 that Tereshkova gave her own account of events. She noticed that the automatic orientation system of the Vostok capsule was set up incorrectly. This would have led to her being sent to her death in a higher orbit, rather than returned to Earth. The fault was corrected on her second day in orbit and may have caused the delay in her return. She landed in the Altay region near today's Kazakhstan-Mongolia-China border. As she descended, she saw that she was heading for a large lake, and was fortunate that the wind blew her onto land, though she suffered a bump on her face. Some local villagers helped her out of her spacesuit and invited her to dinner. She accepted, which led to her being reprimanded for breaking the rules. It was suggested she was drunk, which she denied. She had spent 70.8 hours in flight and made 48 orbits of the Earth.

Despite the criticisms of Tereshkova's behaviour during the flight, she was revered in Russia. The honours she received included the title Hero of the Soviet Union, the Order of Lenin and the Gold Star Medal. Although she never made another space flight, she later became a test pilot and instructor, and earned a doctorate in technical sciences.

However, her life became public property and she was persuaded to marry fellow cosmonaut Andriyan Nikolayev. Their daughter, Elena, was the subject of medical interest as she was the first child born to parents who had both been in space. The marriage was not happy and Tereshkova and Nikolayev divorced in 1980. She later married a surgeon, Yuliy Shaposhnikov, and became involved in politics, serving as a deputy to the Supreme Soviet, and a member of the Supreme Soviet Presidium. Her work for international co-operation won the United Nations Gold Medal for Peace. Even since the collapse of the Soviet Union, she has remained politically active, and was elected a deputy to the State Duma in 2011.

The criticism of Tereshkova's behaviour in flight may suggest that the Soviet's commitment to putting a woman into space masked a more patriarchal attitude. The men around her may have been jealous, or found it difficult to believe that a woman could cope in space, or they may have resented her readiness to argue with them. It is possible to dismiss Tereshkova's flight as propaganda, and to suggest that she was selected as much for her pleasant personality as for her abilities. However, it must have required great courage to go into space in these early days when the technology was being developed, and the rest of her life story bears out the verdict that she was a brave and determined woman. In 2013, at the age of 76, she declared that she would like to go to Mars, even if the mission was a one way trip.