The Christmas Truce, 1914 Content from the guide to life, the universe and everything 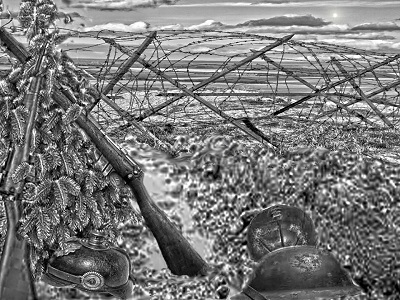 Bavarians and English, until then the greatest enemies, shook hands, talked to each other and exchanged items. The only star who stood at 9am still in the sky was directly above them which was interpreted by people as a special sign. More and more people joined, at the entire line friend and foe went together, greeted each other by shaking hands and exchanged presents. You will soon see that man lives on, even if he knows nothing more at this time than killing and murdering. Christmas 1914 I will never forget.
- Eyewitness Cpl Josef Wenzl1 from Schwandorf, describing the Weihnachtsfrieden (Christmas truce) in a letter to his parents

Late December 1914 on the Western Front of the First World War was not a festive time for soldiers, entrenched as they were in a foreign land far away from the safety and comforts of home. British troops were settling down for the night as best they could in a place not fit for domesticated animals. They were cold, wet, hungry, trying to ignore the stench and the lice, and praying for undisturbed sleep. Their only succour from the hellish conditions was the occasional missive containing news from home and maybe a little treat which had survived the journey.

One soldier hastily ripped open his new letter and felt his heart soar when he learned of the birth of his son. His wife's description of the birth made him feel a little queasy but both were well and the boy was thriving. Reasons to rejoice and be thankful. He wondered how long it would be before he could hold his son in his arms, or if they would even meet in this life. A tear formed, slipped unnoticed down his face and sploshed onto his hand. Angry with himself, he wiped his cheek and dismissed the morbid thoughts as he re-read the letter, grateful to hear his wife's voice through her handwriting. He was not the only one longing for home.

That night, Christmas Eve, the British troops were issued with a Christmas gift box from King George V's daughter Mary, the Princess Royal. The boxes contained various items such as a packet of cigarettes, tobacco, a pipe, writing paper, pencils, sweets, a Christmas card and a photo of the Princess. Across no-man's-land, German soldiers were also receiving gifts from home. These included small Christmas trees which were decorated then planted atop their trenches - in full view of the enemy. Some Christmas carols were sung, including 'Stille Nacht' ('Silent Night'), a festive tune known to both sides. Music has the remarkable ability to transport the listener to another time and place by way of memory. British veterans later recalled that they'd joined in the singing; their words were different but the tune was the same. Two opposing sides, one day bent on killing each other, the next singing from the same hymn sheet, it must have felt like a respite from Hell itself.

Historical accounts vary on what happened next. One British general later wrote to his wife describing how a German soldier shouted that they wanted a day's truce, and offered to meet in the middle. A British soldier tentatively responded; he left the relative safety of the trench and walked across no-man's land. Others followed their lead, shook hands in greeting, exchanged gifts and took photos. A German Colonel was seen talking to one of the British captains. Some of the men had a kick-about with a football2, using their rolled-up coats for makeshift goalposts. More poignantly, bodies were able to be recovered and buried by their kinsmen. As night fell the soldiers sang 'Auld Lang Syne' together - those who didn't know the words joined in the linking of arms - before heading back to their respective trenches and the resumption of war the following day.

It is weird to think that tomorrow night we shall be at it [war] again. If one gets through this show it will be a Christmas time to live in one's memory.
- Captain RJ Armes3 of the 1st Battalion North Staffordshire Regiment

The informal truce broke military law and was tantamount to treason. Although the truce occurred at several points along the line, it was not universal along all 400 miles of trenches. Fear of being shot at dawn kept most soldiers in line. The top brass were furious, declaring that the stories of the cessation of hostilities over Christmas were detrimental to fighting spirit or even were downright lies. Officers were threatened with Court Martial if they initiated any informal ceasefires or allowed them to happen in the future, but there are no records of anyone being punished for this particular incidence of fraternisation. No photographs were published in German newspapers and their reports were written in negative language, in direct contrast to the press in Britain. As the war dragged on more blood was shed, bombs dropped, gas deployed and too many mothers lost their children in the following years. There were no more widespread Christmas truces.

The story of the Christmas truce of 1914 has become a legend. Tributes to its spirit of peace have been made by pop stars, companies advertising in the media and in television shows. To mark the centenary in 2014, a re-enactment of the get-together in no-man's-land was produced for the Christmas advert for Sainsbury's supermarket, in partnership with the Royal British Legion, the charity which supports veterans of the British Armed Forces.

There is a memorial to the Christmas truce in Frelinghien, northern France. On 12 December, 2014, a Football Remembers memorial to the Christmas truce, designed by ten year old competition winner Spencer Turner, was jointly unveiled at the National Memorial Arboretum at Alrewas, near Lichfield, Staffordshire, by Football Association President Prince William and Roy Hodgson, coach of the England football team.

Since 2006, when those shot at dawn for treason were pardoned by HM Queen Elizabeth II, services on Remembrance Sunday have included men once branded as cowards, and their names have been added to existing war memorials. We also should not forget the courage of those who took part in the Christmas truce, who put humanity before duty and created a magical moment in history that should be remembered as a tribute to the human spirit triumphing over adversity.

1Josef Wenzl was killed on 6 May, 1917, in the Second Battle of the Aisne, which was fought near Soissons and Reims, Northern France.2Probably a sandbag filled with straw, or a tin can.3Captain Armes died on 9 April, 1916, in Mesopotamia, while serving with the 7th Battalion, North Staffordshire Regiment.