Shaking Hands Content from the guide to life, the universe and everything 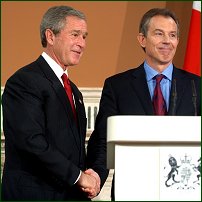 Question: What do men do standing, ladies do sitting down and dogs do on three legs?
Answer: Shake hands.

The act of shaking hands, customarily the right hand, is the most often used semi-formal introduction in modern culture. It is a familiar gesture to establish kinship and to make the foray into conversation more fluid.

Typically, men treat a handshake differently to women. To women, it is nothing more than a polite gesture of introduction. To men, it can be a show of strength, akin to arm wrestling1. The ideal handshake should be strong and firm, not limp, like a wet lettuce.

The handshake is an ancient form of greeting; there are a few different explanations concerning the origins of the handshake. However they all have the same theme, to declare that both parties were unarmed, while at the same time keeping each other at arm's length.

One version is that the hand was not originally shaken, the right hand was opened and displayed, to show that it contained no weapon; the shaking of the hand developed later. Another variant is that the shaking of the hand was to displace any weapons which may have been hidden up the sleeve. Yet another suggests that while the right hand was used for shaking, the left hand was used to 'pat down' the other person's arm to ensure there were no hidden weapons.

The most common reason for a handshake that of introduction, whether it is between friends or business associates. A handshake can be used at the start and the end of a business meeting. As a race, we're not content with mere verbal introduction. Saying 'hello' doesn't make the same impression as grabbing someone's hand, pumping it up and down and smiling in a disarming manner. It is critically important that you do not wince if the person you're introducing yourself to is crushing your hand2. They will never respect you if you do.

A handshake can be used as a congratulatory gesture at award ceremonies. This could be anything from a school child being presented a certificate in a school assembly to a celebrity winning an Oscar at a lavish event.

Sealing the agreement of an informal or provisional contract or confirming a bet can be achieved by a simple handshake; an uncouth way to seal an agreement is to spit on the hand before shaking. A handshake can also be used to signify the end of an argument, conflict or the beginning of a truce.

However, it should be remembered that not all cultures use handshaking as an acceptable greeting gesture. In some cultures and religions, shaking hands with someone of the opposite sex is viewed as offensive, and an offered hand may be refused. Bowing, kissing one or both cheeks, hugging and even rubbing noses are acceptable greetings to some cultures. You should know which custom is appropriate before you approach a person to greet them.

The position of the hand offered for shaking can be an indication hierarchy, albeit temporary in a given situation.

There are two basic forms of handshaking, formal and informal. Formal is the business meeting and interview standard handshake. Informal is used for social gatherings with family and friends, these are the handshakes used with added touching and affection.

Not Quite Shaking Hands

There are some gestures which are not quite a handshake, but do however involve touching the other person's hand. These include:

Scouts shake hands with the left hand, while saluting with the right hand. This practice is said to originate from an Ashanti Tribe custom discovered by Lord Robert Baden-Powell's on his visit to Ghana.

The Ashanti tell a story about Baden-Powell's first visit to Kumasi, their capital city:
'He was greeted by a warrior chief who held out his left hand. He told Baden-Powell that the bravest of the brave shake with the left hand.'
So began the left handshake which is used by millions of Scouts throughout the world. A warrior uses his left hand to hold a shield, and his right hand holds the spear. So to show his trust in someone, the warrior puts down his protective shield and greets them with his left hand.
- From Ghana, West Africa.

In some parts of the world even left-handed people never use the left hand for shaking hands. This is due to an ancient custom, which dictates that the left hand is the 'toilet' hand, and therefore should never be used for eating, giving or receiving, which includes another person's hand.

Handfasting, an ancient Pagan custom where during a ceremony, a loving couple's hands were gently bound together with ribbon or light rope as a sign of commitment to each other for an agreed amount of time.

According to comedian, Eddie Izzard, the best way to deal with an over-aggressive handshake is to collapse and pretend to be dead. Then claim to suffer from 'Squeezy Hand Death Syndrome'.

Maybe someone should have suggested that to the victims of 'Mr Shake Hands Man' (Tadao Tomomatsu). Mr Shake Hands Man - a character from Banzai, a Japanese comedy/gameshow who went where celebrities could be found and shook their hands while interviewing them, and wouldn't let go. The home audience guessed between themselves how long the handshake would last.

Fans of celebrities and royalists will stand for hours in all weathers at a designated place in the hope of shaking the hand of their favourite celebrity or monarch.

A handshake is also a computer term. It confirms that communication between a computer and a peripheral has been established, and that the two devices have identified each other and the protocols used to transfer data have been selected.

1Albeit, a socially acceptable version that does not (usually) involve hot, sweaty men and beer.2This should be used man-to-man only; a gentleman should never shake a lady's hand in a rough way.3Recommended only if you do not want to keep your job.