Shot At Dawn Content from the guide to life, the universe and everything 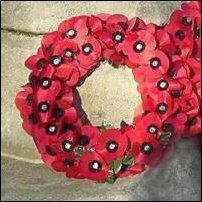 It is on official record that 306 British and Commonwealth soldiers, including 23 Canadians, 22 Irish and five from New Zealand, were shot by their own side during the Great War (1914 - 1918). Members of the firing squad were warned to fire straight, or they may suffer the same fate. If they didn't kill the prisoner, the officer in charge would have to. The officer loaded the guns out of sight of the firing squad; at least one gun contained blank ammunition. This was so that no-one knew who had taken the life, absolving them of the burden of responsibility.

Most cities, towns and villages of the UK have a war memorial. Usually situated in a central location or outside a church, they commemorate 'the glorious dead' — the soldiers, airmen and sailors who died during the Great War. Since 1918, other names have been added to the original memorials. They are the names of the serving young men and women who also didn't return home to their families after leaving them to fight for King and country.

One village, Fulstow in Lincolnshire, did not have such a memorial. It's not that they hadn't suffered the tragic loss of young lives cut short: ten Fulstow men died in the Great War. The villagers wanted a memorial. During the discussion about who should be honoured and remembered, the inclusion of one particular name was objected to, and a disagreement arose.

Pte Charles Kirman of the Lincolnshire Regiment had served nine years in the Army then left to take a job in civvy street. He got married and started a family. When war was declared, Kirman was recalled to the Army. He fought at, and was injured in, battles at Mons and the Somme. Pte Kirman went AWOL (absent without leave) in November 1916, to visit his wife and children. Branded a coward when he surrendered to Military Police a couple of days later, he was court-martialled. At the age of 32 he was sentenced to death and in September 1917 he was shot at dawn1. His family believed he had been suffering from shell-shock2, and his descendants campaigned to clear his name. Over 87 years later, the villagers and councillors finally reached an agreement with each other, that his name should be included, and fund-raising for a suitable memorial began.

Fulstow Village Hall had been built in honour of the three men and two women of Fulstow who had been killed in WWII, but it held no reference to the WWI casualties. In November 2005 a polished green granite commemorative plaque to all — including Pte Charles Kirman, was finally unveiled at Fulstow Village Hall. There were enough funds left over for an identical plaque to be installed at St Lawrence's Church, where a service took place on Armistice Sunday 2005, the first in living memory.

The Shot At Dawn Memorial

Many families organised petitions for pardons, only to face objections from people who believed the executed men were deserters or cowards, and to fight for a pardon was tantamount to insulting the memory of the brave souls who had stood their ground and died in battle.

Finally, a 'Shot At Dawn' memorial for all of the 306 was unveiled in 2001 at the National Memorial Arboretum, Croxall Road, Alrewas, near Lichfield in Staffordshire. The 10ft (3m) statue3 of a head-bowed, blindfolded soldier with a target hung around his neck was modelled on Pte Herbert Burden. He had lied about his age when he signed up to fight for his country. He was 16 years old. After ten months in the Northumberland Fusiliers he was court-martialled for breach of military discipline (desertion) after he left his post. He was executed by firing squad in July 1915; aged 17, Pte Burden was legally too young to even be in the Army.

In 2006, UK Defence Secretary Des Browne announced that he would be seeking an official group pardon for all 306 men. The motion received parliamentary approval and HM the Queen granted a posthumous pardon for them all. Less than two weeks later, the Remembrance Sunday service of November 2006 at the Cenotaph in London, attended by thousands of people: representatives of today's serving personnel, elderly veterans, their carers and family members, dignitaries and members of the Royal Family, honoured all war dead — including those shot at dawn.

At the going down of the sun and in the morning
We will remember them.

1Being shot by firing squad (pooled from your own comrades) was considered an honourable death — criminals were hanged.2Today this would be called Post Traumatic Stress.3Created by Birmingham sculptor Andy De Comyn.