Battlestar Galactica - the Re-imagined TV Series Content from the guide to life, the universe and everything 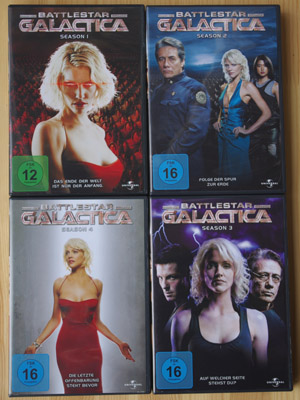 All this has happened before, and all this will happen again.
– The Sacred Scrolls, The Cycle of Time

The award-winning1 2004 science fiction TV series, Battlestar Galactica, is the re-imagination of a series of the same name aired in the late 1970s2. The basic plot and many character names are the same in both series, but otherwise there are many differences. The new series has a much darker tone than the original one and there are many changes in the story itself. The series also later got two prequels: Caprica and Blood and Chrome.

The series was started by a four-hour mini-series of two parts in 2003, which served as a pilot movie to the whole series consisting of four seasons and two movies. The series was first shown between 2004 and 2008 in the UK and US but was also sold to many other countries and translated into different languages. All in all the series consists of 74 episodes, which tell one whole story. It is not advised to watch episodes in a different order or miss one in-between, as this can lead to complete confusion.

Humanity is living on 12 different planets of our galaxy, which orbit around four different stars. Each of the 12 Colonies has its own culture and traditions. They are linked together by interplanetary trade and a unified government. Each of the colonies is named after one zodiacal sign. The centre of the Colonial civilisation is the planet Caprica.

The Colonies created the Cylons, a cybernetic race of sentient machines, to be workers and a military force. They became humanity's slaves, but only a few years after their introduction the Cylons revolted and started a war against their former masters. The Cylon War went on for many years, with big losses for both humans and Cylons. In the end an armistice was declared and the Cylons left to find a world for their race to live on.

The series starts 40 years after the end of the Cylon War. Humanity lives in peace and no sign of the former enemies has ever been seen again. As there is no threat anymore, the old battlestars, large spaceships built during the war, all go out of service. The last one to be decommissioned is the battlestar Galactica. It is supposed to become a museum of the Cylon War.

Right after the Galactica's decommissioning ceremony all human Colonies are hit by a sudden heavy Cylon attack. Cities are hit by nuclear warheads and all newer spaceships are destroyed by a computer virus. Together with only a handful of civilian ships and less than 50,000 survivors, the Galactica escapes from the Cylon attack. There is no way to save the rest of humanity.

For the next four years the human fleet is on constant run from the Cylons, who seem to follow them wherever they go. They are on the way to find a new place to live on the mythical planet of the 13th Colony: Earth. They are guided by ancient religious texts as well as visions, but their lives are always in danger.

Soon they find out that not all Cylons look like robots anymore, but there are also humanoid models living among them unnoticed; anyone could be one of them and many do not even know what they are. In addition the humans themselves are not as unified as they should be; a society crammed together on spaceships does have problems of various kinds, not least the supply of food, drinking water and medicine.

Starbuck: Why can't we use the starboard launch?
Chief Tyrol: It's a gift shop now.
Starbuck: Frak3 me.
– Battlestar Galactica mini-series

The Galactica was one of 12 ships built in the early days of the Cylon War and is the oldest battlestar still in use. The large ship has a rather bulky, solid design. It was built to be able to operate for years without needing any supplies, having large water tanks and special long-time storage areas for food.

To avoid a Cylon computer virus attack, the consoles of the Galactica are not part of a network but stand-alone computers. This makes the Galactica often seem to be rather primitive in comparison to other spaceships seen in science fiction. The Galactica is able to fly with sub-light speed within star systems but is not equipped to land on planets. For interstellar travels it uses two FTL-drives (Faster-Than-Light), which bend space to make the ship 'jump' from one point in space to another within seconds.

It's not enough to just live. You have to have something to live for.
– William Adama

Battlestar Galactica is an unusual science fiction series also because it does not feature many exotic planets and life forms. While there are a handful of foreign planets which are visited by the Galactica and her crew, none of them can be called very exotic and there appears to be hardly any wildlife. The only sentient beings appearing in the series are humans and Cylons.

The Colonial people lived in the Twelve Colonies in a technologically advanced society, which still showed certain similarities to 21st Century Earth. They came from a planet called Kobol, where they lived with their gods thousands of years in the past. The Colonial pantheon consists of gods named after the Greek gods and each planet has one of them as their patron. In addition there are prophetic texts fortelling the future as well as a belief in a circular nature of time.

Most Cylons come in the shape of large, robot-like Centurions, developed from the original combat Cylons built by humans. They are made of chrome with shooting weapons integrated in their arms. Due to their look humans often refer to them as 'toasters'. The Centurions fought humanity in the First Cylon War and made attempts to create fully organic Cylons. One of the results was the creation of the Hybrids: human-looking Cylons which are used as main computers of their basestars, the Cylon motherships. Another semi-organic form of Cylons are the Raiders, which fulfill the same functions as Colonial Vipers.

There are also 12 (originally 13) humanoid 'models' of the Cylons. They look just like normal humans but there are uncounted copies of each of them. When one of the human models dies their consciousness is downloaded to a new body and the Cylon is 'reborn'. If there are no resurrection facilities in the vicinity the Cylon actually dies. Some of the human Cylons live as infiltrators in the Colonies, while others are not even aware of the fact that they are not usual humans because they have been given false memories. All copies of one model share the same personality and in Cylon democracy one copy can make decisions for the whole series of models. If one model does not behave as it should, the entire series can be 'boxed', meaning their information is put on storage and no new copies are produced. As opposed to the humans, Cylons have a monotheistic religion and believe in an omnipresent, omnipotent diety. They still also seem to acknowledge some of the sacred texts of the Colonies.

Battlestar Galactica is in simple words a series about humanity. It is about the good and bad in people, how they live together and build up a new society while others act as destructive forces and only work for their own benefit. The series is full of very complex and believable characters. Some of the sociological problems include the establishing of a new government and the relationship between the civil government and the military. There is also the question of justice and how to deal with criminals. There are many morality questions; the problems of taking responsibility as well as living with the results of one's actions.

It is, of course, also a story about the hate between two peoples. Genocide, war and terrorism as the result of oppression are important parts of the series. But not always the same people are the attackers and there are also significant disagreements within the two races leading to even more conflicts.

Another important aspect is religion and spirituality. There is, on the one hand, the polytheistic religion of the majority of the Colonials and the monotheistic religion of the Cylons, and there seems to be some truth in both of these belief systems. Some people are also atheists or at least rather sceptical regarding the beliefs of others. Visions and prophesies are an important factor in bringing the story to a conclusion, but there is always the uncertainty about what is a real vision and what is a mental condition or caused by drugs. And finally there is also the question of sects and the influencing of others through religion for one's own benefit as well as the mistreatment of others because of their religious beliefs.

There must be some way out of here
Said the joker to the thief
There's too much confusion
I can't get no relief
– 'All Along the Watchtower', Bob Dylan

Music is an important aspect in creating the atmosphere of any movie and TV series. The music of Battlestar Galactica takes an unusual route for a science fiction series. It is shaped by the use of many percussion instruments and cultural instruments from all over the world. The intro already sets the show apart from other series: it is an Indian mantra followed by a fast piece played on Japanese drums4.

There are recurring musical themes for different characters and different situations which appear throughout the series. The Adama family theme for instance uses uilleann pipes and Irish flute, while Six's theme is played by an Indonesian gamelan5 ensemble. In most cases only few musicians were needed to produce the music for Battleship Galactica, which at first was also a budgetary matter: larger orchestras with strings and brass only appear at special occasions. One of these is, for instance, the slow violin piece which accompanies one of the most important recurring visions in the series. At the end of the third and during the last season of Battlestar Galactica, variations of the theme of Bob Dylan's 'All Along the Watchtower' play an important role. It is played on instruments from many different cultures as well as piano. The last song played in the whole series is the Jimi Hendrix version of the song.

So Say We All

Battlestar Galactica is a science fiction series which definitely sets itself apart from other TV series of its kind. It is certainly darker and more serious than, for instance, Star Trek, and has many strong characters. It tells a story about humanity and the struggle for survival in a hostile environment. Even if some fans of the original series may not agree with all aspects of the re-imagination, it can still be said that the re-imagined Battlestar Galactica is one of the best science fiction series of all times.

1Among others: ING Awards for best TV Program, best Sci-Fi Series and best Storyline; Saturn Awards for various actors and best TV series; Emmy Awards for 'Outstanding Special Visual Effects for a Series' and 'Outstanding Sound Editing For A Series'.2There was also a not very successful follow-up in the 1980s.3Frak is a fictional swearword used in the series to replace a very similar real swearword.4Only the very first season aired in the US used different music.5In a gamelan, instruments like gongs, xylophones, drums and flutes are played.