North American Architecture of the 18th Century Content from the guide to life, the universe and everything

The French settled in the south, at the Mississippi, while Spanish missionaries founded settlements in California, New Mexico, Texas and Florida. Both would influence the later architecture of these areas. 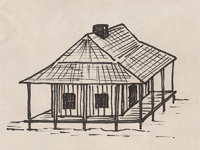 The French occupied a very big part of northern America in the 18th Century, but compared to its size not many settlers lived in this area. Most houses were built in towns in the south. Logs were put vertically into the ground, constructing the walls of a hut with one room, this was called 'poteaux-en-terre'. A porch was built around all four sides of the hut. Both hut and porch were covered by a hip roof, which was a bit steeper on the hut than on the outside. The porches brought shade to the walls of the hut and could catch the wind for ventilation.

Where floods could reach the houses, a ground floor made of bricks was built under the wooden house and porches, to protect the wood from water. This ground floor was mainly used for storage and cooking. French double doors became a typical feature of the French Colonial style.

Later in the 18th Century, the log walls were replaced by timber frames with infillings made of brick, called 'briquette-entre-poteaux'. The porches disappeared, but the hip roof remained a characteristic of the French Colonial style. Dormers brought light to the attic, which was now used for bedrooms. 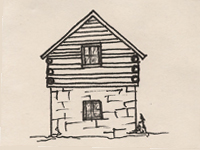 In the late 17th Century many Germans settled in the Delaware valley. In Europe, half-timbered houses with infillings of stone were usual at that time. The German settlers built their own variant using a combination of wood and stone. The lower floor was built of stone while the upper floor was built like a log cabin. At the end of the century the houses became bigger, with up to eight rooms, and were only built of stone.

At the beginning of the 18th Century country houses were often half built into hills, which helped keeping them cool in summer and warm in winter. Especially in towns, two-storey houses were built. Often an extension for the kitchen was made later on the ground floor. The staircase at one of the short sides of the house allowed further extensions so the house could grow with the families. 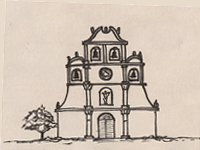 The Spanish founded hundreds of small missions with Baroque churches to 'civilize' the Native Americans in the south-west. The churches were small simple buildings with white façades and quite often open bell towers. Garrisons for soldiers who protected the missions were built at the end of the 18th Century. These so-called 'presidios' were built in today's cities of San Diego, Monterey, San Francisco and Santa Barbara. They were four-sided buildings with a big courtyard in the middle and made from bricks, clay and wood. Facing the courtyard were quarters for soldiers, stables and store rooms. The outside walls were particularly solid and durable. 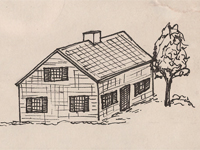 Cape Cod is situated in the south-east of Massachusetts, in a rough climate with cold winters. Most of the houses here were built by people who usually built ships. They had to be resistant to wind and sand.

The centre of the house was a chimney made of bricks for all fireplaces. On the ground floor was a hall, a kitchen and a room for ill people and pregnant women. The bedrooms were situated in the attic, with windows at the gables. 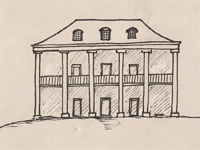 Plantations were built at the rivers in the south and brought wealth to the people. The early plantation houses in Virginia, North and South Carolina mirror the European roots of their builders.

The main difference to other houses was that the façade facing the river was as important as the façade facing the street, because the river was used for transportation and of course the house could be seen from there. If possible the house was also built on a hill and oriented in a way that the porches on both of its sides would catch the wind and bring cool air into the house. The rooms inside the house were built in a row, one next to the other, so the wind could sweep through them and bring cool air. The long porches brought shade. This way of ventilation was copied from the colonies in India.

The French plantation houses that were developed in Louisiana and Mississippi were so well adapted to the warm climate, that this way of building was soon used in all of the southern regions of northern America. 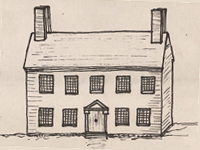 The Georgian Style was developed in London after the great fire, influenced by the Italian Renaissance. It is named after the Kings George who reigned in England at that time. Special books for carpenters and builders from England helped the new style to spread all over the English colonies in northern America in the 18th Century. It was used by the rich to show off their wealth.

Georgian houses were two storeys high and made of bricks, or wood in regions where bricks were harder to get. They had symmetrical façades with big decorative chimneys on both sides to heat the many rooms. The entrance was decorated in renaissance style, with pilasters and cornices. Every room in these houses had its special function, the ground floor usually had four rooms with a central hall, connecting the front and back doors. 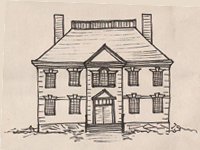 In the middle of the 18th Century the Italian Renaissance architect Palladio was very popular and people wanted to build houses similar to his style. This was mainly done by adding various decorations to the house. Over the front door a small window was added to bring light into the anteroom and on the first floor a so called Palladian window was added above the entrance. This window was built up of three parts with small pillars between them. The middle part was higher than the sides and arched on the top.

More elaborate buildings had a portico1. The corners of the building often imitated massive stone blocks. The top of the cellar was raised above the ground and served as the base of the house, which should make it look bigger. Decorative rails were often attached to the rooftop, this is the so-called 'widow's walk'. 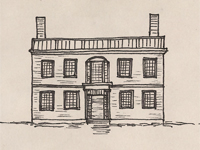 The Federal Style was used in all colonies of northern America because the English Georgian Style became more and more unpopular before and after the revolution. A new style should show the independence of America. People still went to Europe to see the architecture and various books about the European styles were available.

The new style that was slowly developed was influenced by Palladio and soon new books explained how to plan houses of the new Federal Style. New standards of comfort and privacy asked for things like dressing rooms, closets and even toilets in the house.

The Federal Style was used until about 1830. As in the Georgian Style, the façades were symmetrical and monumental. Most of them were built of bricks and decorated with a few white wooden ornaments on the outside and inside. The entrance had decorative windows and wooden pillars that carried a small canopy. The corridor in the middle of the house remained, the staircase was artistically decorated. The roofs often looked as though they were flat but in fact had a very shallow slope and balustrades at all sides. 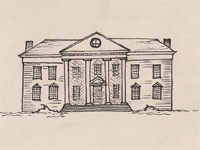 Thomas Jefferson was a very productive architect. During his stay in Europe he learned about Roman architecture and decided that this should be the design principle of every building.

The Jeffersonian Classicism was mainly used in the southern states. Typical houses are symmetrical and built of red bricks with a heavy portico of white painted wood. In the gable there often was a round window. The hall in the middle of the house behind the portico was two storeys high. The kitchen was situated in a separate building.

1A portico is the façade of a Roman temple, consisting of a base, pillars, cornice and gable.