North American Architecture of the 16th and 17th Centuries Content from the guide to life, the universe and everything

The first European settlers in North America brought their knowledge about buildings from their homelands and adapted it to local climate and resources. First settlements were built on the east coast, spreading inland during the 17th Century. The humble dwellings of the very first settlers slowly evolved into bigger houses.

The first permanent European settlement in the North American Colonies was built in Florida by the Spanish in the middle of the 16th Century. They lived in simple huts with only one room, which were built like the homes of the Native Americans living in this region. Palm leaves were bound to long sticks, which were then attached to the wooden framework of the house, forming a curtain-like wall. The roof consisted of the same material and had only a small hole serving as a chimney. The floor was no more than clay. These huts were quick and easy to build until better houses were available.

At the end of the 16th Century better saws were available and so the palm leaves of the walls were replaced by wooden boards. Other than that, the houses stayed the same.

The simple buildings of the settlers in New England were timber-framed, infilled with wickerwork covered with clay. On the outside the walls were covered with wooden boards for weather protection. Only a few small windows brought some light and they could be closed with shutters. The roofs were steep and covered with dried grass.

Inside the house there was only one room with a floor of clay. Some had only a hole in the roof for letting out the smoke of the fire, others had a chimney of wickerwork and clay, which was placed inside the house at one of the gable sides. The attic was used as storage space.

Newcomers even lived in wigwams similar to those of the Native Americans until other houses were built for them. 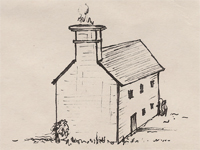 The fireplaces of the half-timbered houses in Rhode Island were built bigger and bigger, until in the middle of the century they occupied most or even one entire side of a one-room house. The stone walls of the fireplace and the chimney also served as outer walls of the house. This earned the houses the name 'Rhode Island Stone Ender'. Glass windows were imported from England, the floors were made of wooden boards. Next to the fireplace was the entrance and a staircase which led to the bedroom in the attic. 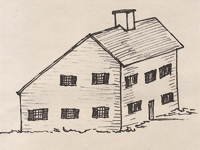 At the end of the 17th Century a kitchen was added on the ground floor to one of the long sides of the Stone Ender; the roof was simply extended. A cellar under the floorboards of the house could be reached from outside.

Taller houses with 1½ or two storeys and two rooms on the ground floor were extended in the same way. As the shape reminded people of salt boxes, these buildings were called Saltbox houses. The chimney was in the middle of the house and could be used by the fireplaces in both rooms. Next to them a separate chimney was erected for the kitchen. Attached to the chimney was the staircase in the entrance area.

The early houses in Virginia were quite similar to the first half-timbered houses in New England, but the walls were not covered with boards.

The farmers and fishers who settled on the Atlantic coast in the 17th Century brought the architecture of the English Middle Ages with them to America. As enough clay could be found in the area, the houses were made of brick, with arched doors and windows. The steep roofs had gable windows for the bedrooms in the attic, which were reached via a staircase in one corner of the house.

A simple house had a single room on the lower floor, was about 6x5 meters in size and had a chimney at one wall. If more space was needed, a second room and chimney were added, constructing a long house with a chimney at each end. One of the rooms usually served as a kitchen.

In the late 17th Century, people became wealthier and could afford bigger houses. The kitchens moved to a separate building, to keep the main house cool in summer. As families became bigger, more bedrooms were added to the ground floor, this time by making the house wider, not longer. The roof was extended over these additional rooms, and was called 'catslide' because it was said not even a cat could walk on such a steep roof. 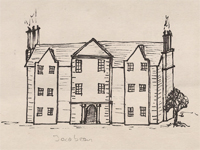 Another style that was used in Maryland, Virginia, North Carolina and South Carolina from the middle of the 17th Century was the Jacobean Style. It was a style of the late Renaissance in England. The symmetrical brick façades of the Jacobean buildings were decorated with columns and other classical motifs, without being too concerned about purity of style. Big chimneys at each side of the house also served as decoration. 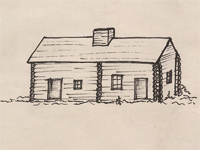 Just like the houses of the other settlers, the Swedish log cabins originally only had one room. A chimney built of wood and clay was added to the outside of the house. Later a second room was built, but the two rooms had no connecting door. One way of adding the second room was to build it at the chimney-wall, so two chimneys were standing next to each other in the centre. The other way was to have each chimney at one end of the house and an open passage between the two rooms. All houses were built of natural round logs and had a shingle roof. 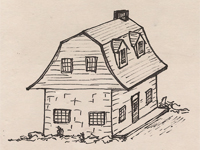 The Dutch settled on the Hudson River. Their biggest town was New Amsterdam, later to be called New York City. At first the Dutch settlers lived in holes which they dug in the ground and covered with grass or bark. They also built temporary huts similar to wigwams.

The first permanent buildings were stone houses with only one room and shingle or grass roofs. In the middle of the 17th Century, bigger houses with brick walls and tiled roofs were built, especially in New Amsterdam. They resembled the houses which were built in the Netherlands at the same time.

In the rural areas, people used whatever materials were available and so invented a new building tradition. The rural houses had only one floor with natural stone walls. The space between the roof and the ground floor at the gable sides was covered with wooden planks. The roof was extended at the longer sides of the house to protect the entrance of the house. In the early 18th Century the English mansard roof1 was adapted and the long roof at the front and back side of the house was developed into a porch. 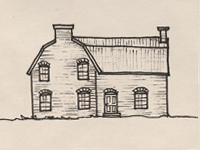 Many people in the southern area of the early colonies were wealthier than people in the north and so they could afford bigger houses from the start. At the end of the 17th Century their houses were built of brick with shingle mansard roofs. The main part of the house was the same as the simple two-room houses, with chimneys at both ends of the house and a corridor and staircase in the middle to let fresh air circulate through the whole house. To this house they added a kitchen with another chimney at the far end. The whole building was L- or T-shaped.

1A double-sloped roof, the lower slope normally much steeper than the upper one.