Band of Skulls Content from the guide to life, the universe and everything 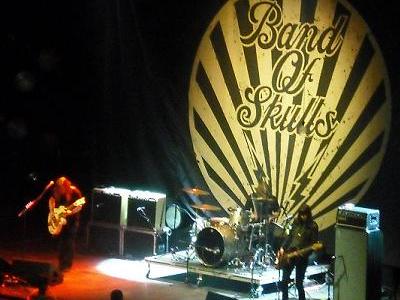 Aspiring musicians Russell Marsden and Matt Hayward from Southampton, UK, jammed together in Matt's dad's shed since they were both 12, heavily influenced by the blues and rock & roll that Matt's father played. The Hayward family had a very relaxed attitude to musicians, and Russell found himself spending time at Matt's house where he could play any of the instruments that were just laying about to his heart's content – although much to the chagrin of the neighbours.

When Matt met Emma Richardson while at art college in Winchester1, regardless of the fact that she had never played bass before, she joined the pair and the band Fleeing New York was formed around 2004. Over time, Russell (guitar and vocals) and Matt (drums), together with Emma (bass and vocals) were frustrated with not playing any gigs:

When me and Russ started playing together, dad wouldn't let us play a gig until we were good enough. By the time of our debut gig we were the most over–rehearsed school band in England.
– Matt

Taking Care of Their Own

Becoming more pro–active, the group approached Southampton's The Talking Heads venue, and were given the opportunity to host a monthly revue which they called 'Club Skull'. Here they brought in musicians like Anna Calvi, and then saved the best till last, themselves.

It ended up being the local hang for all the bands.
– Russell

'Club Skull' hence gave the group the inspiration for rebirth, and in 2008 the renamed Band of Skulls took to the road, playing gigs in the Greater London area, their musical influences including Jimi Hendrix, Led Zeppelin, Tom Waits and Radiohead. The Band of Skulls debut album Baby Darling Doll Face Honey was released in 2009 (distributed by Shangri–La Music), taking its name from an album track. The demos were recorded in Matt's dad's shed–cum–studio, giving them a true garage–rock sound.

After favourable reception and radio play, the band soon picked up momentum, touring with the Black Rebel Motorcycle Club in 2010 and selling out the London Forum in October that year. In 2012, the Band of Skulls supported The Black Keys, had a short documentary about them broadcast by Channel 4 in the UK, and released their new album Sweet Sour. As their repertoire grew, the band played more stadium gigs, with Russell remarking that they were going from strength to strength, creating:

Highlights for Band of Skulls in 2012 include performing live on the Late Show with David Letterman, touring with the Red Hot Chili Peppers, Emma having her first solo art exhibition Cruisin' for a Bruisin', and further touring including Splendour in the Grass in Australia, and the Isle of Wight Festival.

A Band of Skulls gig experience might feel a little haphazard. The three–piece will enter and simply start playing. There is little banter between the band and the crowd. Matt will often need a roadie to come out and tighten his drum–skins, as the drumming is so intense. Russell will change guitars and re-tune often. Pauses between songs while Russell takes a few swigs of a drink are common.

But this in no way mars the musicianship and the overall intensity of the strong rock & roll that Band of Skulls create for you. Matt's drumming can be likened to Dave Grohl's2, except a little rawer. Coupled with Emma's strong bass vibe it makes for a seat–throbbingly good time. If you sit down.

The lyrics to many of the songs (or at least their choruses) are extremely catchy and you'll find yourself singing, or shouting along, with Russell and the rest of the crowd. And, while much of a Band of Skulls set is good old fashioned rock & roll3 with a smattering of blues rhythm, the smoothness of the vocals in some songs mellows the tone. This is what gives the Band of Skulls their unique vibe, the seamless transition from strong guitar riffs to smooth vocals back to energetic thumping drumbeats – all in a heartbeat.

Many of the Band of Skulls album tracks have charted reasonably well in the UK, US, Canada and Australia4, including 'Sweet Sour', 'Bruises', 'Death by Diamonds and Pearls' and 'The Devil Takes Care of His Own'. They received iTunes Single of the Week for 'I Know What I Am' in March 2009, helping sales of their debut album, and their second album also received favourable reviews, debuting at #14 in the UK album charts. However, you could also have heard their music without knowing it:

1As such, Emma is the designer of the artwork on the album covers.2Drummer with Nirvana, and creative genius behind the Foo Fighters.3In keeping with AC/DC or Black Sabbath.4Breaking the Top 40 with 'The Devil Takes Care of His Own'.5An EP entitled Friends was released by the band in March, 2010.