The Hooden Horse Content from the guide to life, the universe and everything 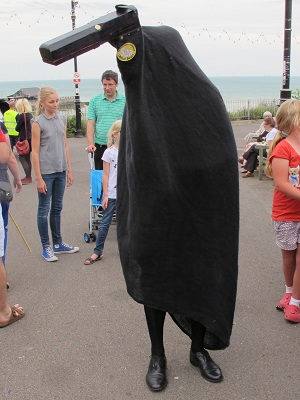 No, it's not a spelling mistake. It is 'Hooden', not 'Wooden', and although this particular horse's head is made from wood, that is not where it gets its name. The Hooden Horse is native to the county of Kent in the UK, specifically East Kent. More specifically, the Isle of Thanet.

First, a little background as to why the horse is so important to Kent. The white horse is Kent's County Symbol, along with the motto, 'Invicta'. It is believed the horse was adopted from the symbol used by the brothers Hengist and Horsa. They came from Jutland at the behest of Vortigern to defeat the Picts, and landed on the Isle of Thanet around 446 AD. After securing Thanet, they went on to take Kent and later defeated Vortigern. Their names translate as 'stallion' and 'mare' respectively, hence the symbolism. Many of the Kentish place–names, such as Canterbury, Crayfourd, the River Stour and even Kent are of Jutish derivation.

The motto of 'Invicta' itself is interesting, being adopted from 1066 when the Norman invader William marched on London from Hastings. He attempted to march through East Kent, but was deterred when the locals set upon his army with branches and farm tools, forcing him to take the longer route through West Kent. The motto was adopted, as it means undefeated, or unconquered. Add to this the fact that Dover Castle was neither besieged nor defeated by William, but managed to gain concessions and did not succumb to primogeniture1, maintaining 'gavelkind', where land was passed from a father to be dispersed equally between his sons. However, William's advance did divide the County in two, with 'A Man of Kent' coming from the undefeated eastern side of Kent, and 'A Kentish Man' being from the defeated western side.

But what of 'Hooding', or 'Hoodening' as it became known? It is the Isle of Thanet's take on the custom of 'Guising' (or disguising), performed in and around Derbyshire and Lancashire. Guising itself has been traced back to 690 AD, although guising in its modern form appears to have been recorded from the mid–18th Century.

Confused? Please read on, and hopefully all will become clear.

The Hooden Horse could be confused with the similar sounding 'hobby horse', yet it isn't anything like it. In fact, it is an East Kent tradition occurring east of a line drawn from Whitstable to Folkestone, but appears to be restricted to the Isle of Thanet and its immediate environs, from where it has spread since being revived.

It was associated with farm field workers around the Christmas period, notably ploughmen and carters. It is believed they would carve a crude wooden representation of a horse's head, possibly using discarded nails for eyes and a scrap of leather for ears. The head would be supported on a pole around 4 foot (120cm) long. An old hop sack would be attached at the base of the head to hide the person operating it. Also connected to the head was a wooden, hinged lower jaw that had a string attached to open and close the jaws. The pole would enable the head to be manipulated and swiveled, often in a slightly malicious fashion, to coax people to part with money, often through the gaping maw of the horse, resulting in a rapid smacking of the jaws, as if relishing a recent feed. This may have replaced the more usual use of a horse's skull, which appears to predate Hoodening, and can still be found in certain traditions in the UK and amongst Morris sides2.

The Hooden Horse, in past times, would be guided by a carter, attached by reins, who was meant to control this unruly and often malevolent beast. There may also be a rider and a Betsy (or Betty) still seen in many Morris sides today, which was a man dressed as a woman. The troupe would often be surrounded by children. It appears to have been traditional around the Christmas period for the Hooden Horse and troupe to go around the large houses of the Parish giving performances of short plays, or 'wassails', in the hope of getting food, drink and/or money. The idea behind the 'guise' was to hide the identity of the players, as begging was frowned upon (if not actually illegal), often being linked with vagrancy. However, work would be in short supply during the winter months and so anything to tide the workers over the lean period had to be grabbed. Unfortunately, maybe through a reduction of farm workers due to mechanisation, combined with the conscription of horses to the army during the First World War, or just changes in modern society, Hoodening died out during the early 20th Century. The custom was only revived in the 1950s when a Hooden Horse was found in Walmer, and a copy made. East Kent Morris adopted this as their mascot, and gradually other Morris sides followed suit.

While Hoodening, and the Hooden Horse, has roots in earlier practices of Guising, as stated earlier, it became more known to people outside of Kent in the 18th and 19th Centuries, with reports of the practice to be found in magazines of the time. The first written record of a Hooden Horse and Hoodening occurs in 1736, but is not apparently recorded again until featuring in the May edition of European Magazine in 1807. Another mention of the Hoodening custom occurs in Walcott, published by Edward Stanford in 1859 –

(In Ramsgate)… a curious custom used to prevail called 'going a hodening', which consisted in singing carols, while a horse's head (hoden) carved in wood was carried in procession; to the songs were added the ringing of hand–bells, and the snapping of the jaws of the hobby.

And again, a publication in 1861 reports of;

young men, grotesquely habited, on Christmas Eve, at Ramsgate and in the Isle of Thanet ... 'hodening', carrying a dead horse's head upon a pole four feet long, snapping the jaws of the hoden together by pulling a string, while their mates ring hand-bells and sing carols. 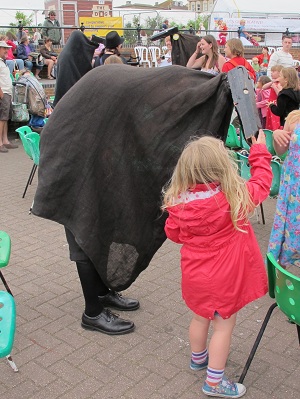 On the Isle of Thanet, in the town of Broadstairs, during the second full week of August there is a Folk Festival that attracts a large number of people into the town. Figures vary as to the full numbers, but estimates place it as around 120,000, roughly the same number as the entire population of the island!

The festival symbol is the Hooden Horse, it being a unique traditional figure synonymous with the area. This has a black wooden head, with reflective eyes, leather ears and a snappy mouth, controlled by a string, which is used to collect money that falls into a small pouch concealed inside. The operator is shrouded in a black hop-sack to hide his identity, along with black breeches3, white socks and tagged garters.

The Broadstairs Hooden Horse only appears during the week of the Broadstairs Folk Festival, and this Researcher believes there are six of these horses, each of which has a licence on the side of its head stating, 'Official Beast'.

There are a number of revivalist Hoodeners in Kent, other than the team at Broadstairs Folk Festival. Some have formed in West Kent, notably The Tonbridge Mummers and Hoodeners, formed in 1981, the Ravensbourne Morris, in 1947, Hartley Morris, formed in the 1930s, and the Whitstable Hoodeners in 1980. In East Kent, other Morris sides are Birchington, Chislet, East Kent Morris, Sandgate and Sandling.

A note needs to be added concerning the Gate Inn, Marshside, in East Kent, which holds a special fondness in this Researcher's heart. It is a hostelry that has welcomed and promoted folk events, especially its Boxing Day lunchtime Morris celebration. It has its own Hooden Horse, found in Hoath close by, dating from 1900.

So the demise of the Hooden Horse was not entire, and there are many Morris Sides who use farm animal skulls to perform variations on Hoodening. It is good to see that this strange tradition, from a small little–known island on the South–East coast of England, lives on.

1The right, by law or custom, of the firstborn to inherit an entire estate, to the exclusion of younger siblings.2Morris dancing is a traditional form of dancing, performed in England, usually with six men, known as a side, with bells around the ankles, and handkerchiefs or sticks in their hands. They also have a uniform, often of white shirts, black or white knee breeches, and either a tabard or baldric, with rosettes and a hat. The latter is often bedecked with flowers and/or feathers and assorted 'trophy' badges. The origin of the tradition is still debated.3Trousers.