Hey-ho the Hobbyhorse Content from the guide to life, the universe and everything 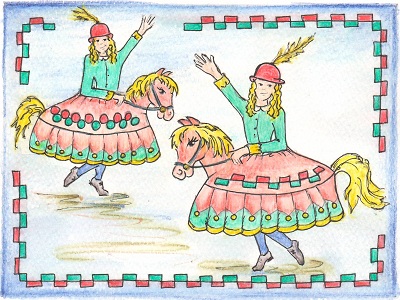 Around the internet, on Facebook pages and other social media, people these days are asked, 'Do you have any hobbies?' From the fact that this question appears to be innocently asked – mainly to see what kinds of groups one might want to join, or which niche-marketing advertisers can profitably descend on one's spambox   – it can be concluded that in the 21st Century, a hobby is regarded as a benign pleasure. But this was not always so.

Decoupage: harmless pastime or sign of mental instability? Stamp collecting, bird-watching, folk dancing: fun ways to increase knowledge and meet like-minded persons, or obsessive, useless form of behaviour? Are hobbyists more than merely people with bees in their bonnets? Should the authorities be alerted?

Where does the word 'hobby' come from, anyway? And what do horses have to do with geek activity?

What was a Hobbyhorse When It was at Home?

Back in the 16th Century, a hobby was a kind of horse. It was small. The name 'Hobby' (or 'Hobbie, or 'Hobyn') was a nickname for Robert, so someone we call 'Robbie' today might have been called 'Hobyn'1. About the same time, people started referring to the pantomime horses sported by morris dancers as 'hobby horses' – the kind of mock horse that's worn around the waist of the dancer. Later usage included children's stick horses as hobbyhorses, as well as carousel horses and rocking horses. Hence, 'to ride a hobbyhorse' meant to do something fun, frivolous, and essentially useless.

The Hobbyhorse is Forgot

There was an old ballad with the chorus, 'Hey, oh, the hobbyhorse is forgot.' It must have been successful. Shakespeare refers to this chorus at least three times (once in Hamlet).

The ballad was also prophetic: we have forgotten why 'the hobbyhorse is forgot'.

The ballad was part of a morris dance. Will Kemp sings the chorus in his Nine Daies Wonder. Kemp's morris dancing could be considered an X-treme hobby. These days, he would be trying for the Guinness Book of Records. In 1580, on a bet, Kemp danced a jig all the way from Norwich to London, a distance of 80 miles. On the way, he sang:

With hey and ho, through thicke and thin,
the hobby horse quite forgotten,
I follow'd as I did begin,
although the way were rotten.

From Morris Dancing to (even more) Frivolous Pursuits

Even in the 16th Century, apparently, morris dancing wasn't taken very seriously. Neither was riding around on a toy horse. The word 'hobbyhorse' took on other meanings, to wit, a silly person, a buffoon, or even a 'loose woman'. Hobbyhorses were in bad odour.

By the 18th Century, 'riding a hobbyhorse' came to mean engaging in obsessive, ridiculous behaviour. In Tristram Shandy, Laurence Sterne uses the adjective 'hobbyhorsical', so the habit of pointless erudition was well-ensconced – at least, in Britain.

The 18th Century was also a time when dedicated amateurs collected things –   butterflies, fossils, archaeological bric-a-brac, information, etymologies, you name it. Encyclopaedias were born, correspondences carried out on any and all topics. It was the age of obsession – and its legacy lives on. Each succeeding century added its quantum of hobbyists and collectors of fun facts.

As late as 1881, 'hobbyhorsiness' was being negatively commented upon. So how did the hobby become such a positive pastime? Well, look at those encylopaedists. Hobbyists have contributed mightily to the knowledge in the world. Amateur astronomers, for example, have made major discoveries.

What begins as a hobby can become a serious pursuit. The Linux operating system was developed by a Finnish university student – and it grew out of a hobby. Sometimes a hobby grows out of a serious endeavour: during World War II, aircraft spotting was a matter of survival. Although we aren't usually worried about enemy planes these days – at least, in most places – aircraft spotting continues as a hobby, along with trainspotting.

Some hobbies have greater cachet than others. Pejorative terms such as 'anorak' indicate merely that the hobby in question is currently unfashionable. Why winning at Guild Wars should be trendier than collecting knowledge about steam engine wheel arrangements is a question for debate, but hobbyists pursue a wide variety of interests. Whole industries have grown up to feed the need for hobby requisites. We may ride virtual hobbyhorses now, but we are unlikely to stop our obsessive collecting, playing, and tinkering any time soon. Hobbies will continue to give rise to innovation – after all, the first bicycle, the Laufmaschine or velocipede, was called 'hobby horse' in English2.

1Later, farmhorses were similarly called 'Dobbin', as in '... and we'll hitch old Dobbin to the shay.'2The Laufmaschine was the invention of a German baron with democratic intentions. He wanted to give the poor a form of transportation less expensive than a horse. Working on this invention could be called the Baron's hobbyhorse.