Aircraft Spotting Content from the guide to life, the universe and everything 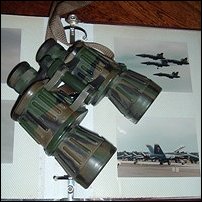 Aircraft spotting is a fairly harmless hobby that evolved on Earth during the 20th Century. It comprises the making of visual contact with flying machines that might range from hovercraft, airships, balloons, autogyros, helicopters, gliders, drones, microlights and manned spacecraft. The 'spotting' element involves the initial identification of the aircraft and its progressive classification. Depending on the range at which the aircraft is seen, and perhaps heard, spotters are likely to know its manufacturer, its generic type, its precise type, its operator, its owner, its registration, its construction number, its squadron, its base, its delivery date, previous registration and so forth. Those who ridicule spotters, and there are many, allege that they probably know the colour of the pilot's eyes; this is highly improbable.

One fairly distinctive aspect of the hobby is that it can be practised almost anywhere. Thus from a small café in Rickmansworth, you could watch a light helicopter heading for Denham, a large jumbo jet climbing away from Heathrow or a quiet and luxurious VIP aircraft bringing the Prime Minister of the United Kingdom back to Northolt.

The range of colourful magazines available at newsagents on the subject of aviation indicates the extent to which it is seen as a topic of mainstream interest. Only a minority of their readers are likely to be dedicated spotters. Some non-profit magazines are available by mail only to meet the more specialised requirements of spotters, such as production lists, changes of registration marks when aircraft are exported, etc. The BBC occasionally televises highlights of air displays held in Great Britain and a few television documentaries show life 'behind the scenes' at British airports, predominantly Heathrow, Liverpool and Luton. The flexibility of the helicopter was demonstrated well in a British prize TV show called Treasure Hunt1. Ballooning and space exploration receive remarkably little coverage by TV stations.

Some spotters will relish the variety of sightings that this hobby opens up and the chance that it provides to spend time outdoors. Some, however, will focus quite precisely on planes of a particular type or from a particular era. Some, for instance, disregard privately owned planes, others disregard all civilian aircraft, and others disregard all military planes. Some work in the aviation business or hope to do so.

In the middle of the 20th Century, the ability to recognise different aircraft was recognised as an important skill, particularly at times of war. In the UK, for example, a Royal Observer Corps was formed and latterly (1955-1992) its members would have played an important role identifying impact sites and forecasting radiation threats in the event of a nuclear attack occurring against the United Kingdom. A total of 872 bunkers, each configured for three observers to inhabit, provided their observation network. More recently, progress towards international peace has included formalised provisions for countries to inspect each other's military aircraft and associated facilities at short notice as a security-building measure. These may include inspections of the cutting-up of once offensive aircraft and weapons. These duties are performed by paid specialists, not aircraft spotters.

The less probable the sighting of a particular aircraft in a particular location, the more excitement will be generated among aircraft spotters and the further they will generally travel in order to see or photograph it. Obviously, many events including low cloud, nightfall, secure fences, buildings and the constraints arising from paid employment or the need to sleep may conspire against someone seeing or precisely identifying the aircraft they wish to spot. This adds a degree of uncertainty and excitement to the hobby.

Because different spotters inevitably see the same aircraft in different places, or at different times in the same place, they need to communicate effectively with each other to maximise their collective enjoyment. Those who listen in on air traffic control conversations or intercept datalinks used by civilian airliners have further sources of useful information that can be shared to mutual benefit. For these reasons, successful participants in the hobby need to be good communicators and may be skilled in the use of reference sources and databases. The social aspects of the hobby generally add to its appeal, although meetings between spotters are often limited to airfields or convenient viewpoints on their perimeters.

The hobby is male-dominated, partly because the aviation industry and recruitment practices in the armed forces tended to favour men during the 20th Century. Participants are perceived as 'sad loners' in the mainstream media along with all other participants in outdoor spotting hobbies (bird spotters, bus spotters, butterfly spotters and train spotters). Along with other hobbies that generate no material rewards for the participant, the pastime is portrayed as 'not serious' by the sort of people who think that digital watches are 'a pretty neat idea'. The fact that spotting is essentially a dispersed activity, except at organised airshows or international airports, means that the advertising industry does not see spotters as a niche market that can be easily economically targeted. This is another reason why certain people look down on spotting as a 'complete waste of time'. So that the time of advertisers is not wasted, it should be explained that once an aircraft spotter has bought an anorak, a notebook, a telescope, radio and a pair of binoculars, it is difficult to sell him anything other than ballpoint pens. The term 'anorak' has long been in use as a derisory term for outdoor spotters of anything. It has latterly been applied to computer enthusiasts who are of course more appropriately dismissed as 'geeks' or 'nerds' by all those whose idea of a worthwhile hobby is to stereotype people according to ill-informed pre-conceptions handed down from previous generations.

Some airfields acknowledge spotting as a legitimate activity and realise that a proportion of the general public is fascinated by moving aircraft and the many supporting activities on the ground that air travellers take for granted. Their operators may create visitor centres, parking areas or picnic sites in safe places around or within an airport. Some airfields accommodate aircraft museums or recognise their historic interest or associations with important aircraft. Some feature on tourist trails for these reasons. Airfields have an interest in maintaining good relations with nearby communities whose members may have legitimate anxieties about noise, safety, air quality, surface water contamination, and congestion in relation to aircraft operations. By recognising the local interest in their activities and through the arranging of open days or sharing of certain on-site facilities such theatres, sports halls, and restaurants, airfield operators in both the civil and military sectors have dispelled some anxieties and misunderstandings. At the other extreme, some airfields have suffered from vandalism and trespassing to a serious extent and for obvious reasons must turn away spotters and more casual visitors. The need for airfields receiving international flights to maintain secure areas for border control and customs purposes must also be recognised by spotters and anyone else in the vicinity of heliports or airfield property. Military airfields also need to maintain a secure boundary and the authorities of many countries prohibit photography in or around such establishments. Listening in to air traffic communications or relaying information heard from that source is also illegal in some countries.

As with most hobbies, a range of shorthand terms and jargon has evolved to reflect the intricacies of the activity. There are obviously nicknames for different types of aircraft and some of these have origins in the armed forces or the aviation industry. Some of the abbreviations are drawn straight from the language used for the serious purposes of air traffic control. This includes the phonetic alphabet - Alpha, Bravo, Charlie, etc, which reduces ambiguity in spoken messages.

The more common slang or shorthand expressions include:

1Treasure Hunt was a British TV gameshow broadcast by Channel 4 and produced by Chatsworth Television from 1982-1989. Presented by Kenneth Kendal and former Breakfast TV weather-girl Wincey Willis, the game consisted of a pair of contestants attempting to solve cryptic clues to locations in British tourist attractions such as stately homes and old castles. They would be aided by a library of local maps, while roving clue-hunter Anneka Rice (or, for the final series, ex-tennis player Anabelle Croft) would be taken by helicopter to as near to the location as possible and then run frantically through the streets calling out to passers-by 'Where's the clue?' Once Anneka had found the next clue she would cry 'Stop the clock!' and then catch her breath.