How to Make Blini (and Tvorog) Without Mucking About with Yeast or Whisking Egg Whites Content from the guide to life, the universe and everything 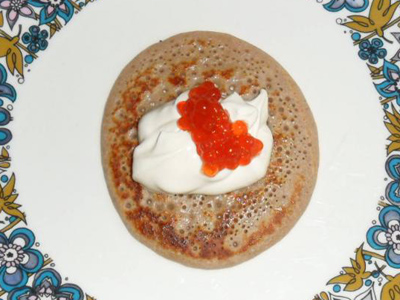 Every cuisine has a pancake recipe of one sort or another and Russia is certainly no exception. Blini, right? Well, sort of. Blini are actually the large plate-sized Slavic variant on the theme with odeyalii the smaller version you see in the picture.

In Russia, they are often eaten sweet, with accompaniments such as condensed milk, sour cream, jam, apple slices and chocolate sauce, although you are just as likely to find them used as a wrap for fillings such as a minced beef and onion mixture. In fact, the only thing you are unlikely to see is blini with sugar and lemon or orange juice squeezed over them. In the Anglo-Saxon world, blini are more popular as starters and tend to be served with smoked salmon and cream cheese, or caviar and sour cream.

This means that the principal time for eating blini in Britain (for example) will probably be Christmas. The principal time for eating blini in Russia is Maslenitsa, 'butter week', the week before Lent begins. Yes, the Russians do not have a pancake day, but a pancake week. The Russian Orthodox Church is still very big on proper fasting, particularly although by no means exclusively during Lent, which can mean giving up meat, eggs, dairy products, fish, alcohol and oil completely. You can see how it is important to get a good run up.

Many recipes for blini written in English involve yeast and whisked egg whites. This does not. Most Russians, when called upon to make blini, will go to the shop, buy one of the special packets of ready-made blini flour, add some milk and that will be the end of the matter. Even abroad this flour is widely available in Eastern European delis. Yeast does not enter into it, although I darkly suspect that some kind of self raising agent, otherwise unheard of in Russia, does.

So is a yeast and egg white-free blini recipe as simple as using self raising flour instead of plain?1 Up to a point. But that point is the desirability of getting the distinctive slightly sour taste that runs through so much of Russian cookery. You can do this by using kefir, a sour-tasting milk drink also available in Eastern European delis, to replace some of the milk you would usually use for the batter. Or even yoghurt gone over its 'sell by' date. But if you take the opportunity to make (and subsequently sample) another classic Russian foodstuff, tvorog, in the process you will produce a whey2 which is perfect for making perfect blinis.

Tvorog is sort of cream cheese which Russians eat a bit like yoghurt by mixing fruit and such into it. Sometimes they make a baked cheesecake out of it by adding raisins. Or they use it along with jam to stuff Russian-style ravioli. The possibilities are many.

Of course you could also go and buy tvorog at the Eastern European deli too, but where's the fun in that? Plus, this smacks of genuine peasant cooking for people with cows. Certainly it is a recipe provided by a genuine Russian babushka3, my mother-in-law, who finds herself when in the UK rather further from civilisation in the form of ready-made blini flour than she would like, as even in London, Eastern European delis do not grow on every street corner.

First take the carton of milk and put it on a radiator. Which should be on.

When it has separated into a sort of yellowish water at the top with a rather squidgy mass at the bottom, pour the milk into a pan and apply heat. Not too much though; it mustn't boil. Leave it to cool down.

Pour the mixture into a colander lined with four layers of muslin. Make sure there is a pan underneath to catch the liquid as you will need this later.

Gather the edges of the muslin together and twist them to make a closed bag. Don't squeeze too hard or everything will come through the sides of the muslin and be lost. Weight the ball of milk remnants down with something like a jam jar filled with water and leave for at least four hours until all the water has been squeezed out. Open up the muslin and scrape the contents into a bowl.

Congratulations. This is tvorog. Put it in the fridge.

For the blini you want the liquid whey you carefully saved earlier. It will keep a day or so in the fridge. When it is needed, heat it until it is tepid. Add the two eggs and beat until frothy. Add the self-raising flour, or the mix of self raising and buckwheat flour, and beat. You want enough flour to make a fairly gloopy pancake batter. Add two dessertspoons of vegetable or sunflower oil and beat that.

And then you cook the blini as with regular pancakes. Do not attempt to flip them, although you will need to cook them on both sides. Use a palette knife or similar to turn them over. If your mixture is just right, small holes will form in the blini as you cook them. If you want the smaller odeyallii pancakes, then use a dessertspoon to get the batter into the pan.

Now the only thing left to do is eat them. Use the tvorog as the filling for the blini along with a bit of jam if you are not sure what else to do with it. And enjoy.

1That's 'self-rising' and 'all purpose' flour for those reading in US English.2As in 'Little Miss Moffat sat on her tuffet eating her curds and whey. Along came a spider and sat down beside her and frightened Miss Moffat away.' Tvorog is the curds.3'Grandmother' or more generically, 'little old lady'.4Quantities are not exact. A 2-litre carton or an American half-gallon is OK too.5*cough* self-rising *cough*6My mother-in-law regards buckwheat flour with suspicion, but I prefer blini when they have some. Blini made purely of buckwheat flour are an acquired taste in my opinion, but that's not to say you won't enjoy them.