The Ships of the Roman Fleet Content from the guide to life, the universe and everything 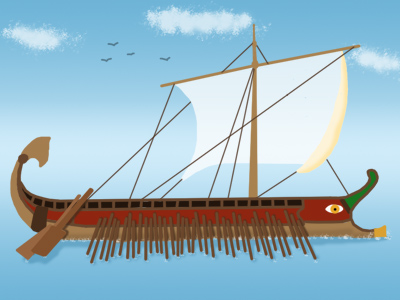 The Roman Empire was established by conquest, but to keep it running, trade and commerce were essential. Since much of the Empire was around the Mediterranean Sea, and transport of goods by sea is quicker and cheaper than on land, a Roman Navy was needed to protect the trade ships from piracy. When the Empire reached further north, the Rhine and Danube rivers formed the northern border, and Navy fleets operated on these in special river boats. The Navy also protected the Empire from invasion, although most of the fighting was done by land-based troops.

The Roman warship was quite different from the ships used for trade, as it needed to be able to manoeuvre in battle, and carried weaponry for attacking other ships. It was a long, narrow ship and was powered by oars, although sail-power would be used for covering long distances. It was known as a navis longa (long ship), or navis rostrata (ram ship) after the ship's principal weapon, the ram or rostra. A sail-powered trading ship, on the other hand, was called a navis oneraria1.

This Entry describes the principal types of ship used by the Navy.

The Ships Types of the Roman Fleet

Listed here are the basic ship types; there were many variations within the basic types. There were also many options in equipment, size, and numbers of rowers. It is fair to say that if a variation was possible, then someone would try it. Some of the less well known or specialist classes of ship have been omitted for clarity, for example very large ships, Imperial pleasure craft and the more obscure or regional vessels.

The Penteconter was the most basic type of warship. It was typically 30 metres long and 4.5 metres wide. It was 'unfenced', which means that it had no deck, or only a partial one. The rowers sat on seats on the hull of the ship, and a walkway ran down the central line of the ship. It was powered by single banks of rowers, 25 per side with a single mast and sail. It developed over the years into a general purpose and scout vessel, used by both merchants and the navy. This was the original long ship, open to the elements.

The typical size of a Hemiolia was between 15 and 20 metres long, 4 metres wide. Like all the ships described here except the Penteconter, it was 'fenced', which means it had a deck above the banks of rowers. It was powered by 30 rowers, 15 per side, with a single mast and sail.

This was a long, light vessel about which little is known – historians do not even know the arrangement of men and oars. The most likely configuration is that there were 10 oars on each side, with two rowers on the 3rd, 4th, 5th, 6th and 7th oars, giving the oars in the waist of the ship more power. Another less likely possibility is that the extra five men on each side had a second bank of oars above the others.

The uses of the Hemiolia are unclear but it appears that it was too light for battle, so it is likely to have been a river patrol, scout or dispatch vessel.

The typical size of the Liburna was between 25 and 30 metres long, 4.75 metres wide, fenced. Powered by single banks of rowers, 25 to 50 per side with single mast and sail, with an optional foremast and sail, the ship was almost always equipped with a ram.

This vessel is likely to have taken its name from the Liburnians, a people from an area that corresponds with the Dalmatian coast and islands of modern Croatia. Before they became a Roman province, they were makers of a type of light fast ship favoured by pirates of the period, known as the liberna. It was recorded that some of these vessels could navigate water only 1 metre deep.

The Romans adapted this design for use in the river fleets due to the shallow draught. The upper deck rails were extended (some were fitted with a partial roof as well) to provide the soldiers and crew protection from missile attack.

In later years, the Liburna was further adapted by the addition of a second bank of rowers situated over the original first bank. This type of ship was known as a Bireme ('two-oar'). It would have also have had a compliment of between 30 and 60 marines.

The Trireme had a projecting gallery fitted to each side to house a third bank of rowers - the name Trireme means three-oared. In ships with multiple banks of rowers, the rowers were housed in several projecting galleries. If viewed from the bow, this gave the ship an appearance similar to a two- or three-storey Tudor house (where the upper storeys project beyond the lower ones).

The typical size of a Quinquereme was around 40 metres long, 5 metres wide, fenced. Powered by three banks of rowers, 90 per side, the upper banks of oars would have had two rowers per oar. The ship was fitted with a main mast and foremast and was often rigged with two sails. The Quinquereme was very similar to the Trireme and also had a projecting gallery fitted to each side to house a third bank of rowers. The difference between the two types appears to be the numbers of rowers manning the oars. The top two banks of oars had two rowers on each oar, whilst the lowest bank had one man per oar. This gave five teams of rowers on three sets of oars, hence the name Quinquereme, meaning five-oared. This made sense as the bottom oars were shorter and lighter; the top banks were heavier due to their length and had further to move each stroke. The other advantage was increased speed and distance due to the additional manpower. This vessel would have had a compliment of between 100 and 140 marines.

The typical size of a Quadrireme was around 35 metres long, 6 to 7 metres wide, fenced. Powered by two banks of rowers, 30 to 40 per side with single mast and sail, this vessel would have also had a compliment of between 70 and 100 marines. It was used in the coastal fleets due to the shallow draught and its ability to be beached.

The typical size of a Hexareme was around 35 to 40 metres long, 5 to 7 metres wide, fenced. It was powered by three banks of rowers, 75 to 100 per side, with a single mast and sail. These ships are recorded at the battle of Actium on both sides. Some confusion is caused by the fact that they were the largest ships in Octavian's fleet and almost2 the smallest ships in Mark Antony's fleet. The name seems to derive from the number of rowers at each oar position ('hex' signifying six). It is most likely that this class of ship was a trireme with two rowers on each oar. It is possible that some had fighting platforms or towers on the bow and stern, similar to a cog or carrack of the Middle Ages.

Beaching a vessel was done only when there were no port facilities and was attempted only on gradually sloping sand or shingle beaches. The method was to row the vessel toward the shore at medium speed. As it approached the beach, orders were given to the rowers to ship the oars. Everyone on board other than the rowers was ordered to the rear of the ship; this had the effect of lifting the bows, allowing the ship to run gently ashore. Once beached, the crew could tie or anchor the ship and lower the gangplanks for disembarkation. Beaching was seldom undertaken under sail, as it was possible to cause damage to the rigging. The operation was best carried out between the tides to avoid stranding the ship.

From the beginning, the ship's main weapon in battle was the ram or rostra. This was a large projection of the bows at water level often plated with copper or bronze. This had only one function, which was to punch a hole in the side of an enemy ship. The only problem with ramming was getting the ram out of the enemy vessel quickly. If the sinking vessel settled in the water, it would lock itself on the ram and either pull down the ramming vessel or break the ram off as it sank. It was often the cause of savage fighting, as the only salvation for soldiers and crew on the sinking ship was to take the ship that had rammed them.

This functioned in a similar way to a drawbridge; it was a ramp with hand rails that was fitted with the beak-like spike that gave it its name. Mounted on a short mast on the prow of the ship, the corvus could be raised and lowered by a system of pulleys. Often mounted on a turntable, the corvus could be swung over the deck of an enemy ship and dropped suddenly, allowing the spike to pierce the deck. Once attached, the enemy ship was boarded by the soldiers stationed on the attacking ship. If necessary, the corvus could be raised and the enemy ship rapidly released. The main problem with the corvus was that it made ships unstable in rough weather - there are many reports of vessels capsizing and sinking.

This functioned in a similar way to a grappling hook. It resembled a harpoon and was fired by catapult. Once embedded in an enemy ship, the attached rope was hauled in, pulling the two ships together. When the ships were alongside, the attacking marines boarded the enemy vessel. The catapult used for the firing of the harpago was also used as ship-board artillery in battle. The harpago was considered more efficient than the corvus and eventually replaced it.

The ballista was a weapon similar in appearance to a huge crossbow. The main difference was that instead of the bow3, it had two levers attached to giant torsion springs made from rope or sinew, tightly wound to provide enormous power. These weapons were used to fire stone shot or massive arrows or bolts and could also fire incendiary missiles at the enemy ships.