Camembert Cheese Content from the guide to life, the universe and everything 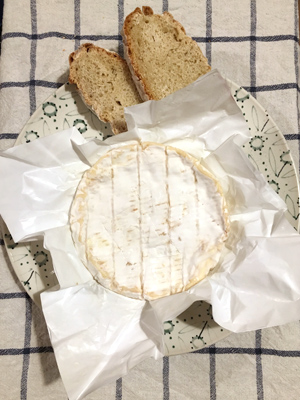 Not to be confused with its larger cousin Brie, this soft white cheese, presented in its distinctive round wooden box, is as French as ooh-la-la1 and as Norman as Hastings in 1066.

Camembert is named after the French Normandy town whose inhabitants claim somewhat dubiously to have 'invented' it during the French Revolution in the late 18th Century, having at some stage fed some to Napoleon and passed it off as their own.

In fact, authors Brugerin de Champier and Charles Estienne had referred to the cheeses of the region prior to 1570, while Pierre Corneille referred to 'the cheeses of Camembert' in his treatis on geography, in 1708. Even the commonly accepted folklore tale of Charles-Jean Bonvoust, a priest who in 1790 took sanctuary in the town of Camembert, in return for which he related the recipe to the now-memorialised Marie Harel implies that the cheese had existed previously. Nevertheless, the bicentennial of this little round cheese was celebrated in 1991, the boxes having been introduced in 1890 by French engineer Ridel, to facilitate transportation.

To guard against anybody fobbing off cheap foreign cheese as proper Camembert, the Syndicat des Fabricants du Véritable Camembert de Normandie (Normandy Real Camembert Producers' Association) was established in 1909. This was backed up by the issuance of Appellation d'Origine Controlée (AOC) legislation by the French Government during the 1980s, and subsequently protected (since 1996) by European Commission Law through Protected Designation of Origin (PDO) legislation.

Making Camembert is as labour-intensive as cheese-making gets, but the end-product is ready in about three weeks, a relatively quick turn-around in the world of classic cheese manufacture.

A good Camembert is pure white and velvety or downy on the outside and soft, almost crumbly-smooth on the inside. Camembert snobs will tend to seek a riper specimen. Depending on conditions, a Camembert can continue to ripen for two to three weeks, during which time the smell of ammonia will become apparent while the creamy golden interior will become ever-more liquid. Eventually, even the hardiest of Camembert-lovers will concede defeat to an odour that is not far removed from wet gym kit that has been allowed to fester undisturbed in a moderate environment inside a plastic bag for more than week. If the cheese reaches this stage, it should be chucked out, or buried.

Notably, the rind can and should be eaten as part of the Camembert experience, which should also feature a stick of crusty French bread (a baguette), and a cup or two of St Emilion. Accordion music is essential, backgammon optional.

1Stereotypical French exclamation used (extensively in British parody) to indicate surprise.2An extract from the fourth stomach of a calf, containing rennin, the enzyme responsible for coagulating the protein in the milk.3A colloquialism for 'chilly'.