Walking the Isle of Wight Coastal Path: Part 5 - The Needles to Cowes Content from the guide to life, the universe and everything 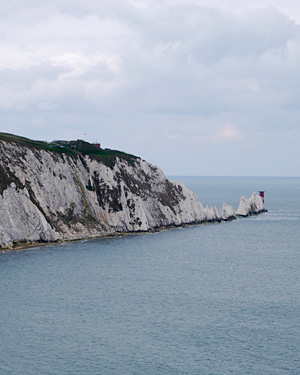 Stage 10: The Needles to Yarmouth

From the Needles Old Battery follow the path that heads northeast alongside the road to the Needles Pleasure Park and Alum Bay. The Needles Pleasure Park has several attractions and places to eat, and also includes a memorial to Marconi1 and fine views out to sea. Alum Bay is famous for its multi-coloured sand cliffs, with 20 different colours of sand naturally occurring here (much of which is being sold off in bottles nearby). Perhaps the best way to descend the cliff is by the chairlift which has operated here since 1973: a rare opportunity to sit down.

Once you've found your way up the other side of the chine, the path turns left to zigzag up Headon Hill, passing Heatherwood Battery and through Headon Warren, a heather-covered cliff top. Follow the path around the prehistoric burial mound and then keep left of the Warren Cottage as you descend. Turn left onto Cliff Drive and then take the footpath downhill off at the next bend, heading into Totland Bay and the coast. Here you can actually descend to beach level via the steps by Widdick Chine and walk on the beach. Wander past Totland Pier, which has a café, round Warden Point and into Colwell Bay. Colwell Bay, a sign proudly informs you, is a Coastal Award Area, although a Second World War pillbox reminds you that visitors weren't always so welcome here. However, you can get a very good view of Hurst Castle on the mainland side of the Solent from here.

Halfway along Colwell Bay you will see a road that runs all the way down to the beach, with a beach shop on one side. The coastal path signs are a bit misleading, but you need to go along this road inland to the top of the cliff and then follow the coast at the top of the cliff. If you continue along the beach you will soon reach a dead end with no way round the coast and a very slippy sheer clay cliff2, with the brick battleship of Fort Albert nearby.

Follow the road up from the beach to turn right onto the main road, and once you are back in the countryside look for the track to Brambles Farm. This track will lead you around Brambles Chine Holiday Camp and Cliff End Fort, another Victorian fort, until you must turn north along Monks Lane. Persevere to the end of the lane and take the cobbled path into the wooded grounds of Fort Victoria Country Park. This Victorian fort, built in 1852-5 to defend the narrow straight of the Solent, is now the site of an aquarium, maritime museum, planetarium, and model railway as well as nature trails. There is a café, toilets and a good view of the Solent from here.

Follow the path out of the country park, across the road and along the coast. This will take you past the outskirts of Norton and on towards the River Yar3. You'll need to leave the coast to avoid walking out onto Norton spit, so head onto Bridge Road as soon as the river and harbour swing into view, then cross the bridge into the town of Yarmouth.

Yarmouth is one of the oldest towns on the Island and was mentioned in the Domesday Book as the town as Ermud4. It has a castle, built in 1547 after the French invasion of the Isle of Wight in 1545 and owned by English Heritage, and a pier that opened in 1876 and acted as the ferry terminus. Yarmouth also has shops, cafés, pubs and restaurants and a Tourist Information centre next to the ferry terminal, where cars and passengers travelling from Lymington disembark.

From the ferry terminal follow the High Street through the town of Yarmouth onto the A3054 – the coastal road that heads due east to the hamlet of Bouldnor. Turn left and walk to the end of Victoria Road to pick up the coastal path. The coastal path heads round the outskirts of Bouldnor Copse, following the top of the cliffs. Bouldnor Copse is owned by the Forestry Commission and is one of the best places on the Island to catch a glimpse of the rare red squirrel. Follow the path on to West Close, turn left onto Sea View Road and, a short way later, take a right towards West Hamstead Farm. From here follow the path eastward to Hamstead Farm, rejoining the coastal path as it follows the top of Hamstead Cliff to Hamstead Ledge. Head round Hamstead Point to Lower Hamstead Farm (near Hamstead Quay) and through Lower Hamstead onto the Hamstead Trail5. At the end of the Hamstead Trail turn left onto Hamstead Drive, pass Hamstead Road and the Lower Hamstead Plantation, and then cross Ningwood Lake, part of the Newtown Estuary.

When you finally arrive at the A3054 again, turn left and follow the road past Nunneys Wood into the small village of Shalfleet, which despite its small size has a proud history, is mentioned in the Domesday Book and has both a manor and a mill.

From Shalfleet head left past the New Inn pub up Mill Road. Avoid going uphill onto the track, and at the very end of the road you'll find a little path running through the hedges and woods. This leads across a footbridge and eventually out onto a lane, which will bring you out onto Corf Road. Turning right leads you past the lane to Corf Camp, an area owned by the Scouts and used as one of their main campsites. Continuing on Corf Road and heading left onto Town Lane will take you over Newtown Bridge and into Newtown, an area owned by the National Trust.

Newtown was once the capital of the Isle of Wight: having oyster beds and the Newtown Estuary made it an easily accessible and busy port. As a town it never had much luck, being destroyed first by Sweyn, father of King Cnut, during the reign of Æthelred II in 1001, and suffering frequent raids from the French before finally being completely destroyed by the French in 1377. Newtown did continue to be the political capital of the Island, sending two MPs to Parliament, until the Great Reform Act of 18326. The remains of the old town hall, dating to 1699, are open to the public.

Having passed the town hall, look for a lane on the right guarded by a National Trust gate. Follow the lane, and later the road, southeast around the Newtown estuary, before rejoining Corf Road to head east then north into Porchfield, a small hamlet with a pub known as the Sportsman's Rest. It is important to keep to the road in this area as the land near the estuary is owned by the Ministry of Defence who use it as a firing range7. Follow the road up to the top of Bunts Hill and, opposite the lane to Bunts Hill Farm, you'll see a footpath on your left running along the edge of a field. Follow this footpath past another farm and turn left onto the road. Head past the campsite to find the path continuing on the left. This leads to Thorness Bay Holiday Centre: holiday chalets around a central Osborne-towered building. Find your way onto the lane and head northeast to Thorness Bay, where you will finally be reunited with the Solent seashore.

Thorness Bay is a quiet, secluded spot where marsh land, mud flats and sand combine to form a bird lover's paradise. Follow the beach to your right, heading along the coast until the path takes you up the bank onto what becomes a low cliff top. Follow the path round to the village of Gurnard, following the coast until you see the Gurnard Luck8 run out. From here follow Marsh Road northeast a short distance around Gurnard Cliff, continuing as it becomes Solent View Road. At the end turn left down Worsley Road and make your way to the Prince's Esplanade. Opened by the Prince of Wales in 1926, this Esplanade links the village of Gurnard with Cowes along the Solent coast.

Following the Esplanade, passing the public convenience on the right, you soon pass a charming town sign labelled 'Cowes' on a yacht background. Shortly after that you will reach Egypt Lighthouse. This small, red and white, beacon-shaped lighthouse marks Egypt Point, the northernmost tip of the Isle of Wight. Egypt Point Lighthouse was operational between 1897 and 1989 and is now used as a sea marker for yachts coming into Cowes. It is a short walk east to Cowes Castle, home of the Royal Yacht Squadron and the home of International sailing. From here follow The Parade southeast until the seafront promenade ends. Head uphill through Watchouse Lane, then turn left and head south into Cowes town centre. Here there are numerous restaurants, pubs, shops and cafés, including a Beatles-themed one, and in following the pedestrianised High Street you will soon arrive back at the Red Funnel ferry terminal, where the walk around the Island began.

So that's it. Of course, we don't expect everyone to do a whole lap of the Island finishing back on Cowes High Street – that would be some people's cup of tea, but for other walkers there are plenty of ways to fit in a pleasant ramble along the seaside, or perhaps a linear walk with the aid of the Island's railway and multiple ferry ports. Regardless, we hope you find this guide helpful and enjoy the many beautiful views that the Wight has to offer.

1Guglielmo Marconi, the inventor of the radio, sent his first over-water radio signal from this point in 1897, initially to a boat and later to Bournemouth and Poole. In 1898 he transmitted the first paid radio signal from Alum Bay and in 1899 he contacted Alum Bay from 70 miles away at sea.2These cliffs cannot be climbed, not even by experienced individuals, and any attempt to do so would result in sinking into the cliff. Hence the warning signs which state, 'Danger of Death - Blue Clay - Do Not Climb'.3This is the Western River Yar. There are two River Yars on the Island, with the other at Bembridge, as 'Yar' was an old English word meaning 'River'. Neither should be confused with the River Yare, which provides the name for Great Yarmouth in Norfolk.4'Muddy Estuary' in Saxon - likely a good description at the time.5This part of the Island is, somewhat unsurprisingly, known as Hamstead.6Sadly, since the 1832 Great Reform Act the Isle of Wight has only had one MP representing the entire population of the Isle of Wight - over 135,000 people - making the Isle of Wight's inhabitants the least politically represented people in the entire United Kingdom.7This is why it is clearly labelled a 'Danger Area' on all maps.8The Luck is a river with a small harbour at its mouth.