Walking the Isle of Wight Coastal Path: Part 3 - Bembridge to Chale Content from the guide to life, the universe and everything 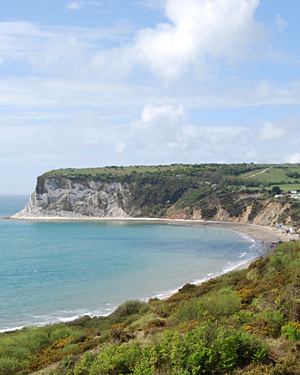 From the RNLI Lifeboat station at Bembridge the coastal route heads along Fishermans Walk, then right onto a footpath, then back onto the road again. Following the road round and heading down Forelands Field Road will lead you back to the seaside. When the path resumes, it is once more on a cliff top path, and passes the rear of what most Island residents still call 'Bembridge School'. A private school was housed in these buildings until the late 20th Century. It now serves as boarding accommodation for Ryde School and an activities centre. The path then continues to Whitecliff Bay - the only point where the beach can be accessed between Bembridge and Sandown.

On leaving Whitecliff Bay, the path rises up Culver Down to near the Yarborough Monument1. At this point, the path rises to 104 metres (341 feet) above sea level. Many people find climbing this hill tiring, and there is a conveniently placed pub and outdoor café area here. This area is owned by the National Trust. From the Yarborough Monument cross the road and follow the path that begins west of the cottages. This takes you back to the cliff path, which descends to Yaverland and thus a large car park that marks the start of the sea wall along Sandown Bay2. After passing the Isle of Wight Zoo, housed in Sandown Granite Fort, and the pterodactyl-shaped Dinosaur Isle Museum, the path joins the road along the esplanade into the large resort of Sandown, passing a bowling green and Sandham Grounds park3. It is an easy stroll along the sea wall, or on the beach if you prefer.

If you are walking on the pavement above the beach, when you get to Sandown Library you may wish to turn left to follow the Edwardian Esplanade along the coast or continue straight ahead along the High Street, where you'll find the Tourist Information office along with cafés, restaurants, and shops selling traditional seaside goods such as sticks of rock, postcards, buckets and spades. At the top of the hill you will reach Pier Street, a road which leads downhill to Sandown Pier.

Sandown Pier, which was built in 1879, is a short walk from Sandown Train Station and a good landmark to begin the fourth stage. A coastal walker may wish to walk to the end and back and enjoy the crazy golf course, amusement arcade and café that it contains.

The next section's exact route is debatable, as although many people who walk the Coastal Path probably follow the sea wall all the way to Shanklin, the official route is along the cliff-tops. The cliff top path goes through Battery Gardens which was a fort built in 1861-3 next to a Napoleonic barracks, then the village of Lake, passing Lake Cliff Gardens in Lake very near Lake's railway station and cafes before arriving in Shanklin. There are several paths that lead up the cliff between Sandown and Shanklin so it is easy to go from the cliff top to the sea wall path between Sandown and Shanklin. Continue along either the cliff top or sea wall path to Shanklin.

If you followed the sea wall into Shanklin, you will find yourself on the Esplanade; if you followed the cliff top path then turn down the road which descends to the Esplanade. This stretch was once home to Shanklin Pier, which was sadly destroyed by the great storm of 1987. Once you have finished enjoying the Esplanade, you'll need to get to the top of the cliff again. The easiest way up is Shanklin's cliff lift4, for which there is a charge, although there are cheaper and nicer ways up to the top of the cliff. If you go up the lift follow the path through Keats Green, named after the Poet Laureate John Keats who lived in Shanklin for 2 years, and follow the road to Shanklin Old Village.

If you have avoided the temptation of the lift and wish to continue to use your legs, walk along the Esplanade past the clock tower to the end of the road next to Fisherman's Cottage, a charming thatched house built in 1817. Although from here a road leads up the cliff, you might instead wish to head along Shanklin Chine, the first chine of the Isle of Wight Coastal Path5. To ascend through Shanklin Chine – following the river up to the 45-foot waterfall – provides the shortest and most picturesque route, though there has been a charge for this privilege since 1817. The chine also includes a heritage centre and tea garden, and at the top of Shanklin Chine you can enter Rhylstone Gardens. From here it is a short walk to Shanklin Old Village, the thatched fishing hamlet of Shanklin that is now a picturesque location with shops, restaurants and pub.

From Shanklin Chine head up the hill along Luccombe Road, following the pavement until the very end of the road where the coastal path resumes. The path descends through National Trust land near Luccombe Chine and The Landslip, an area formed by major landslips that occurred in 1810 and 1928. Do not descend to the beach at Luccombe Chine as this involves going down several steps to the beach only to find it is a dead-end, followed by a tiring ascent back up to the top of the cliff back the way you came. There are various routes available through this wooded enclave – perhaps the best involves descending through Devil's Chimney, a descending narrow staircase through a gap between tall rocks either side of you, and then along to the Wishing Seat, a rock on the Bonchurch/Luccombe border.

From the Wishing Seat and after passing through this jungle, you may wish to head down a winding path to the beach; otherwise, continue along the clifftop to find yourself next to Bonchurch Church (St Boniface), which is Norman in origin and was built c.1170. From the church, head west to Shore Road, which descends to the sea wall at Bonchurch, and a short stroll along the sea wall brings you to the town of Ventnor.

Ventnor is the Island's southernmost town and has shops, bars and restaurants which are often a welcome sight for weary walkers. Entering into Ventnor, you will be treated to a paddling pool containing a model of the entire Isle of Wight, but not by Ventnor Pier as it was demolished in 1993. Continuing along the Esplanade, you will eventually head up away from the beach. When you reach the hairpin bend in the road, continue straight westwards into Ventnor Park, the centrepiece of which is the word 'VENTNOR' inscribed in large, friendly letters in the side of a slope. The path then passes Ventnor Botanic Gardens. This exotic garden was built on the site of the Royal National Hospital For Diseases Of The Chest which owned 22 acres here between 1869 and 1964. The hospital was built to take advantage of Ventnor's healing micro-climate before the development of antibiotics made it redundant, and now the micro-climate is used to the best advantage of rare plants and animals.

At Woody Bay the path deviates from the sea front to follow deserted cliff-top paths around secluded bays and coves, and at the village of St Lawrence ascends to the top of the Niton Undercliff. This involves a complicated zig-zag which starts by taking you up a steep hill between hedgerows and past some thatched cottages, then heads southwest along a track, and finally leaves the track to head northwest up a path to Woolverton Road. Head west to the end of the road, turn right up Old Park Road, and then left at the end onto Undercliff Drive. The continuation of the coastal path is hidden on the inside of the first bend as the road heads uphill. From the top of the hill St Catherine's Lighthouse, constructed in 1840 on the Isle of Wight's southernmost point after the loss of the Clarendon, is visible far below6.

The path now heads westward once more, skirting fields before reaching the outskirts of the village of Niton. Here, take the left-hand path between gardens to reach the road7, then look to your right the track behind the telegraph pole, off which the path continues. Carefully follow the path along the high cliffs to Gore Cliff and Blackgang Chine below. Blackgang Chine is one of the Island's premier tourist destinations and claims to be the UK's oldest Theme Park, open to the public since 1843 when a whale washed ashore there, the skeleton of which is still on display to this day. Blackgang Chine is also the part of the Island where cliff erosion is at work the fastest, with over 2 metres of cliff lost on average each year and with spectacular cliff falls in 1978 and 1994.

From Gore Cliff it is possible to get a good view inland of the Pepper Pot as well as of the attractions of Blackgang Chine, including the 'Cliff Hanger' rollercoaster and the cowboy town. From Blackgang it is only a short 10 minute walk, partly on road, to the village of Chale and St Andrew's Church, which dates from the 12th Century.

1Built in 1849 in memory of Charles Pelham, Earl of Yarborough, and inaugural Commodore of the Royal Yacht Squadron. The Monument was moved to its current position in 1860 to make way for Bembridge Fort.2This stretch of sea wall was built by conscientious objectors during the Great War, and their graffiti, such as 'Socialism – the hope of the world' and appeals to vote for the SDP – the Socialist Democratic Party – can still be seen to this day.3Sandham Grounds was built on the site of Sandown's second castle which was built in 1636 and demolished in 1901.4The first lift was built here in 1892 but the present one dates from 1956.5Chine is an Isle of Wight and Dorset term for where a river meets the edge of a cliff and gradually, over time, erodes the cliff to form a V-shaped gorge.6St Catherine's Lighthouse is the third most powerful lighthouse in the UK, with the main light visible for 30 nautical miles. Construction began in 1838 and the lighthouse was automated in 1997.7Turning right and continuing behind the houses will lead you to the Yar River Trail.