Walking the Isle of Wight Coastal Path: Part 4 - Chale to The Needles Content from the guide to life, the universe and everything 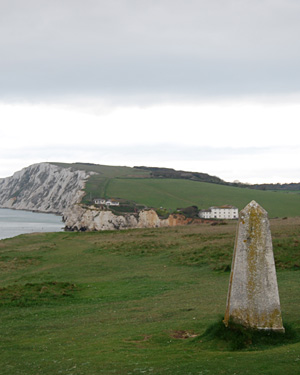 From Chale the walking experience changes quite dramatically as you head to the West Wight. The next stretch involves walking exposed on a cliff top with no shelter for the next few hours. It is recommended that you wear a warm jumper, as, especially when compared to the suntrap of Sandown Bay, the exposed West Wight walk is cold and breezy. This part of the Island is quiet and all but deserted, with few buildings to see or places to stop and rest at. This is because all the villages are inland – there is no point in building near the cliff edge when in a few years time it will be at the bottom of the cliff.

The path is close to the cliff edge at all times, with no fences to prevent you from falling off. The cliffs have a very high clay content, which means that in wet weather it is very difficult to get a secure foothold. As if that were not enough, there are also several chines on the way. Some of these can be traversed by climbing down one side and scrambling up the other. In wet weather this is not recommended and can be dangerous. With some Chines the Coastal Path heads inland and around the chine before returning to the cliff edge. As this area is subject to coastal erosion the path constantly changes; however this does have the advantage of making the area particularly well suited to the discovery of fossilised dinosaurs. In poor weather it is probably best to follow the course of the Military Road1 which runs parallel to the coastal path, although this does not have the same spectacular views.

The coastal path is easily found along Military Road behind Cliff Farm, after which point the path between here and Brighstone consists of navigating the Chines. These are, in order of encounter: Walpen Chine, Ladder Chine, Whale Chine, Shepherds Chine, Cowleaze Chine, Barnes Chine, Granges and Marsh Chine. Most of these are V-shaped chasms in the cliff. This section of the Island was well known for the number of shipwrecks here, with 14 ships reported to be wrecked in one night in 1757. Near Cowleaze Chine there is a campsite which, in the summer, has a café where one can get a heart-warming and well-deserved cup of tea. Past Granges and Marsh Chine, where two rivers have combined to form a Y shaped chine, there is a road (New Road) that runs inland to the village of Brighstone. Brighstone is a charming village off the cliff path which has a pub, The Three Bishops2, the National Trust Brighstone Shop and Museum, some thatched cottages and a thatched post office. Also present is the village church, St Mary The Virgin, which dates from 1190.

If you stopped at Brighstone, return to the cliff path. This is again quiet with only occasional coastguard cottages as landmarks, other than the constant chines to navigate; Chilton Chine, Brook Chine, Shippards Chine and Compton Chine. At the first chine along, Chilton Chine, there is a local tourist attraction, Isle of Wight Pearl, which produces jewellery and, some might say more importantly, has a café and toilets.

Continue along the lonely cliff path, admiring the chalk cliffs of Tennyson Down and Highdown Cliffs in front of you. Carry on along the cliff path passing the National Trust owned Compton Down and Afton Down, site of the ELM monument, an obelisk on the cliff edge in memory of a child whose initials were ELM who fell to her death here in 1846. From here it is a short walk to Freshwater Bay, where you are treated to a sight of civilisation, shops, hotel and public toilets, as well as the landmark of Arch and Stag Rocks at the east edge of Freshwater Bay.

Stage 9: Freshwater Bay to The Needles

From Freshwater Bay, head along Gate Lane until you reach the road to Freshwater Bay House3. Sandwiched between this and the bus stop is a track that leads back to the cliff edge, where the path continues. Head uphill passing Freshwater Redoubt, a fort built during the 1860s French Invasion scare, into National Trust land, heading towards the distinctive Tennyson Memorial. This was built in 1897 at the top of what is now Tennyson Down to commemorate the Poet Laureate Alfred Lord Tennyson, who lived nearby in Farringford House. This is 146 metres (482 feet) above sea level. Continue along the edge of the high chalk cliff a further mile and a half to Scratchell's Bay, site of where the Isle of Wight's Black Knight, Black Arrow and Blue Streak space rockets were tested in the 1950s. This cliff-top rocket testing facility was one of the inspirations for Ian Fleming's James Bond novel Moonraker. Sadly when the National Trust bought the land in 1975, rather than preserve this historic site, the only rocket testing facility in Great Britain, they decided to demolish everything. This is something they now regret, and the National Trust have placed a few information boards about the rocket facility around in an attempt to make up for this blunder.

You may well wish to continue along the path, noticing how the amount of land in front of you and to either side is rapidly diminishing, and enter the Needles Old Battery. This is a National Trust owned fort constructed in 1863 and is the westernmost part of the Isle of Wight, with views overlooking The Needles, chalk stacks to the west of the Isle of Wight, with a lighthouse constructed in 1859 on the furthermost rock.