Walking the Isle of Wight Coastal Path: Part 1 - Introduction Content from the guide to life, the universe and everything 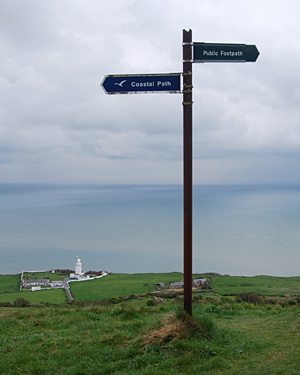 Despite being only 26 miles wide and 23 miles long at its widest points, the Isle of Wight has over 600 miles of footpaths and bridleways, with most of the Island classed as an Area of Outstanding Natural Beauty. One of the best ways to explore the Island on foot is to walk the Coastal Path, a footpath that runs 72 miles1 around the Island's 64-mile coastline.

The Isle of Wight Council take walking very seriously and encourage ramblers to the Island. The Isle of Wight Walking Festival – the UK's largest – has been hosted by the Island for many years, and takes place over two weeks every May. Among the several walks featured is the Isle of Wight Coastal Path, either in stages of various lengths or as an amazing non-stop 72 miles in 24 hours.

The Island also boasts a unique footpath classification system. Every footpath and bridleway on the Island has its own number with a prefix indicating in which of the 20 parishes it is located. So footpaths in Cowes have numbers beginning CS, footpaths in Newport begin N etc2, which helps guide hikers to the right footpath. The Isle of Wight Council had hoped that implementing this system would lead to these footpath numbers appearing on Ordnance Survey maps. Inexplicably, the Ordnance Survey have chosen not to print this extremely useful information on their maps. However, the Council does maintain maps of the routes with numbers and parish borders marked.

Regardless, the Isle Of Wight Coastal Path is easily followed and generally well signposted, with most signs displaying the route's seagull logo on a blue background – some also give the next point of call and distance to it. The path numbers are referenced on the Council's website, which provides notice if any section has to be closed.

When walking the Isle of Wight Coastal Path a strong pair of walking boots or trainers is recommended. Footwear should ideally provide strong ankle support and good grip, and be waterproof and lightweight. Although you can follow the coastal path signs, due to coastal erosion it is quite likely that you will need to divert from the established path, and so it is recommended that you take an up-to-date Ordnance Survey map with you. This should ideally be OS Outdoor Leisure Map 29, which is 1:25,000 scale, although OS Landranger Map 196 at 1:50,000 scale (less detailed) is acceptable. These can be found in outdoor pursuits and tourist information booths across the Island, or ordered online in advance.

Walkers should familiarise themselves with the Countryside Code and be aware of the dangers that walking near cliff edges can face – never attempt the Coastal Path in the dark. The terrain and climate during the walk can also vary significantly. The Eastern Wight is generally well sheltered from the weather, warm, with secure limestone and chalk underfoot. Unprotected walkers are often quickly sunburnt during the summer. The Western Wight is windy, exposed to the elements and has a large proportion of clay soil, including the type known as 'blue slipper', which is susceptible to coastal erosion and cannot be reliably trod on. Sinking into the clay can be a problem in wet weather and as it sticks to boots and trainers, it can make getting a secure foothold a problem, especially when traversing the chines. A chine is an Isle of Wight and Dorset term for where a river meets the edge of a cliff and gradually, over time, erodes the cliff to form a V-Shaped gorge.

It is possible to do the walk with organisations that arrange for a guide and/or baggage carrying. Similarly, walking the Isle of Wight Coastal Path as part of the Walking Festival can provide a completely different walking experience to that of walking the path on your own or in a small group. Although you gain the reassurance that you are going the right way, walking in a large group might possibly detract from the experience of seeing the Isle of Wight's stunning coastline in isolation. If you do walk on your own it is recommended that you take a phone and/or whistle with you, consider carrying a first aid kit and emergency rations, and keep someone informed of your progress at all times.

The Isle of Wight is roughly a diamond shape3, with the capital, Newport, in the middle. At the easternmost point lies the village of Bembridge; the southernmost point is St Catherine's Point; and to the far west you'll find the Needles. The tidal River Medina runs from Newport in the centre up to the northern point of the island; here, it separates East Cowes, which lies on the east shore, from Cowes which lies on the river's west shore4. If you are fortunate enough to live on the Isle of Wight there is no reason not to start the walk from the most convenient location, or walk in either direction. As a broadly circular route, it is possible to pick the route up virtually anywhere, and the entire Island is within 10 miles of the sea.

For those who live on the Mainland it is common to begin the walk from one of the ferry terminals where the ferries from the Mainland dock. These are, from west to east:

Cowes, being the middle of the Island's north shore, is a good starting point – from Cowes it is possible to walk to each of the four corners of the Island in four days, although the walk is divided into different stages to allow for flexible timing. Walking the Isle of Wight Coastal Path is most commonly completed in five days.

The route runs along land owned by bodies as diverse as the Isle of Wight Council, the National Trust and local farmers. It is generally a footpath only, meaning that it is mostly unsuitable for cyclists, horses and motor traffic, although some short sections are along roads or bridleways.

All distances and timings are approximations. The time taken varies according to the speed of the walker, the weather and state of terrain encountered, as well as the time taken for rests, stops, admiring the view etc. Thus, these timings should be considered a minimum amount of time required – please give yourself plenty of time to enjoy the walk. You might happen upon some wildlife or spot a rare red squirrel.