Some Facts About the Champs Elysees Content from the guide to life, the universe and everything 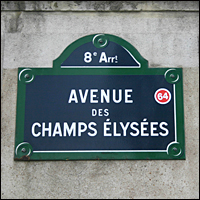 The Champs Elysées ('Elysian Fields') is the thoroughfare that cuts through the heart of Paris and links one end of the city to the other. It consists of the major roads that run from the south-east to the north-west of Paris. The Avenue des Champs Elysées (running from the end of Concorde to Etoile) is the focal point for French celebrations and in recent times it has played host to the festivities of the millennium party and the impromptu chaos that surrounded France's winning of the 1998 World Cup. It is also where the French air their gripes and frustrations, and recently it was the place where the French of all strata of society and religions gathered to protest against the rise of the far-right in the 2002 Presidential elections.

To drive its full four miles (7km) can take from between 15 minutes and three hours, depending on the time of day. But Paris is the city of lights and lovers and it is a city where you walk. If you're walking you can expect to pass five hours to traverse its entirety. What better way to impress your beloved than giving them useful nuggets of history of the sites you'll pass as you stroll down the Champs, arm-in-arm? Nothing... so, below you'll find five sections outlining a little history of five sites along the Champs.