Furbys Content from the guide to life, the universe and everything 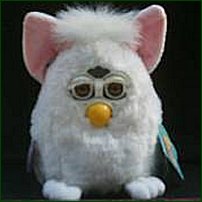 The Birth of the Furby

Furby's designer was a man called Dave Hampton, who took nine months to create it (in addition to an additional nine months spent designing the toy). That was the amount of time between Tiger Electronics showing an interest in his interactive creatures, and the time they hit the shop shelves. Furby's first public appearance was at the International Toy Fair in 1998.

Furbys flew off the shelves in toyshops. Parents battled and there were arguments and fights as stocks dwindled. When stocks ran out, parents turned to the Internet, where Furbys could be purchased for twice, three times or even more of their market price. They were also sold to the highest bidder on eBay.

What Were They Fighting Over?

Original Furbys are around six inches (15cm) tall, with six different fur patterns, and one of the four options of eye colour. They have an all-in-one body and face, small feet, oversized ears, and each has its own name (there were 24 names). The basic fur colour, designs and names have been added to over the years. However, the Furby's most important feature was its computer chip.

The computer chips made the Furby one of the most technologically advanced toys of its time, and some would say the most annoying1. The chip enabled the Furby to be programmed with hearing, learning, speech and motion capabilities. There is about 80K (Kilobytes) altogether. This is roughly shared out as 50K for the speech, 20K for the movements and 8K for the program running it all.

Furbys hear due a microphone inserted on one side of their body. When this picks up sounds, they are amplified and sent to one of Furby's chips. The software then decides what, if any response to make. The amplifier was designed to be more responsive to selective sounds, such as clapping hands.

Furbys can determine between light and dark. This is achieved by the three electronic devices in between and above Furby's eyes. One of those is a CDS (Cadmium Sulphide) Cell2, this is used to measure the changes between lightness and darkness: as Furby's surroundings become lighter or darker, a message is sent to the chip, and Furby responds accordingly: Waking up if it gets lighter, or going to sleep if it gets darker. One of the other two sensors is used to transmit infrared data, and the other works as a receiver of infrared data. These also enable Furbys to communicate with each other.

Furbys were programmed with a selection of words and phrases, 'spoken' in a language called 'Furbish' (the official language of Furbys). With three different pitches of voice, Furbys did not all sound the same. Here is a translation of some of their more common mutterings:

The Trouble With Furbys

Furbys were designed to be childlike, in that they will chat and play for a short while, then go to sleep, as if they had tired themselves out. This is more noticeable when two Furbys are placed near each other, and interact via their Infrared devices.

They seem to have a mind of their own - you cannot control them. They decide when they wake up and chat inanely, and when they went to sleep. When you wanted to play with your Furby, it doesn't want to play. When you want it to go to sleep and be quiet, it decides it wants attention.

Furbys also need regular feeding. When your Furby says 'Kah a-tay' ('I'm hungry'), you need to feed it with pretend food. The ideal way of doing this is to depress its tongue with your finger. If your Furby said 'Koh-koh', it wanted more food. Failure to feed causes a Furby to become ill. One of the symptoms of illness is sneezing, and it will even tell you by saying 'Kah boo koo-doh' (I'm not healthy) and then you will have to spend time nursing it back to health with extra bouts of feeding pretend food.

One of the main problems was simply that the Furby had no on/off button and so the only civil way to silence their inane mutterings was to remove its batteries.

There have been a number of stories circulated over the years about Furbys, lawsuits and various bannings. Here we try to separate the truth from the fiction:

Warner Brothers Lawsuit. One of the first was in December 1998, when it was reported that Hasbro, Tiger Electronics' parent company, had paid a seven-figure settlement, and promised a redesign of the Furby, to Warner Brothers, the makers of the Gremlins films: this was due to the alleged similarity of Furbys to Gremlins. All parties involved deny this. Lawsuit: False.

Furbys banned from the Pentagon. There are two different stories concerning the banning of Furbys from the Pentagon. One says that Pentagon staff banned them because they talked too much, and the other says staff banned them due to concerns that the Furbys could repeat confidential information. Banned for talking too much: Unclarified. Banned on the possibility of repeating confidential information: True. Another unanswered question is: Just who would want to take Furbys into the Pentagon in the first place?

A Furby saved a couple's life A couple fell asleep, after enjoying a candlelit romantic dinner. While they slept, the candles set fire to the curtains; they were woken by their Furby saying 'Ahh, bright light', allowing them to escape and raise the alarm. Lifesaver: Unclarified.

Disposing of a Furby

If you possess a particularly sadistic streak, or if you have found the ownership of a Furby such a traumatic ordeal, that you feel witnessing its destruction will be ideal therapy, there are a couple of options:

In March 1999 McDonalds teamed up with Tiger Electronics to create McFurbys, their latest Happy Meal toy. These were small plastic Furbys in a variety of colours. Some featured limited sound effects and/or movement capabilities. There were a total of 80 to collect. These were available in eight sets, with ten McFurbys in each set. All the different sets of Mcfurbys had slightly different movements and/or sound effects. Such as: In set six, the McFurby’s body colour is black, green, orange blue or teal, (two of each, with a different colour tuff of hair on the top of their head) which when you pushed their tail, their ears fall down and cover their eyes. A year later the McFurbys were back at McDonalds. This time they were cute plush keyrings, and there were just 12 to collect.

With advancements in technology, the Furby evolved into a more advanced toy. The 2005 Furby was larger than the original, in order to house the multi-motor system which had a wider range of motions, emotions and reactions. Also, with six times more memory than the original, it had a larger vocabulary capability. And with many more facial expressions, this was said to make it more cute, clever, fun, and lifelike. Best of all, the 2005 Furby had an on/off switch!

The Furby returned in 2012 and was again in short supply before Christmas in the UK. The 2012 Furby looked similar to the 1998 Furby, being the same shape and size, but 2012 Furby had plastic ears, LED screen eyes, and bright fur colours instead of 1998 Furby's fabric ears, doll's eyes and fur colours based on those of real furry creatures.

The 2012 Furby had different personalities depending on how well or badly it was treated. As with the 1998 Furby there was no on/off switch, however the 2012 Furby fell asleep after a minute of being ignored. There was an optional smart phone app that could be used to feed the Furby and to translate its Furbish into English. Those without smart phones could find a Furbish to English dictionary on the Furby website

1For anyone who has a Furby, but has lost the instructions.2These are used in photography to measure light.3Or other languages, depending on which country the Furbys are destined for.4A hidden message, unknowingly detected and stored in the subconscious.