Wheelie Bins Content from the guide to life, the universe and everything 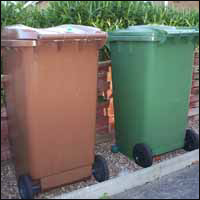 Originally, bins1 were cumbersome, round, and made of metal. They generally had two handles (one on either side, near the top) and a lid. Generally speaking, a bin was a long sheet of metal welded along the shortest edge with a circular metal bottom. Dustmen2 would pick up the bins by one handle, and hoist them over their shoulders in a way calculated to display a cavalier disregard for weight and hygiene.

These were joined (once cheap plastic manufacturing had been mastered) by heavy duty, black plastic bins which mimicked the form of the original bin. They were heavy and also had two handles. The benefit of these bins was that the plastic structure was harder to damage or dent. The downside was that hot waste, like ashes, could play havoc with the interior, and cause interesting, random modifications to the form and functionality of the bin.

The wheelie bin is a recent replacement for the standard bin, but has not yet reached every corner of the Earth. Some benighted places, for example, still rely entirely on large plastic bags, which burst apart and spill their contents at the slightest provocation.

Wheelie bins are usually rectangular, heavy, plastic boxes, about four feet tall and 18 inches square3, with a hinged, flap lid and two wheels on the bottom, the same side as the lid hinge. Behind the hinge is a bar, which is used to push/pull the bin. There may be handles on top of the lid to make opening easier.

Wheelie bins are most commonly black, but other colours include green, brown, grey and red. Different colours may designate different types of waste that should be deposited into the bin: garden waste, recyclable rubbish, or sensitive business materials, for example.

The principle behind the bin is to provide at least as much space as the original, round bins, while decreasing the risk of injury caused by moving rubbish around. Many local authorities require that bins are presented at the kerb4 for collection, and moving an old style bin from the backyard to the street was fraught with the potential for serious muscular distress. Having wheels on a bin means that even the elderly have a fighting chance of getting a full bin out into the street without injury.

In some areas, refuse trucks have been modified, since the introduction of the wheelie bin, to simplify the loading process. This often involves a mechanized lift, like a small forklift arrangement, onto which the bin can be pushed, using the push bar and wheels. The hinge must face away from the back of the vehicle for the process to work effectively, without leaving food remains adhered to the inside of the lid. The lift raises the bin upwards, and then tips backward into the opening at the back of the truck. Braces at the top stop the bin from falling out as it is tilted almost upside down. Then the lift returns the bin to the ground. Trucks may use either singular or dual lifts depending on their size.

The wheels on wheelie bins tend to lull people into a false sense of confidence about how easy they are to move around. While the wheels do make it easier to manoeuvre on flat, even surfaces, various everyday obstacles often pose a problem.

The basic principle behind getting a wheelie bin moving is to unbalance the whole thing and lean it back on to its wheels. This is usually achieved by gripping the bar on the lid and pulling back, while rolling forward on the bin's wheels. A hip shove or firm push with the knee or foot may also assist in moving the bin forward. The problem with this is that heavy, unbalanced objects are not simple to control, especially when two apparently helpful wheels suddenly seem to take on a life of their own.

Going down stairs and kerbs provides the opportunity to either judder your entire skeleton or tip the bin forward, spilling the contents everywhere. Going upstairs means having to heave the weight of the bin, without much assistance from the wheels, or attempt to push it up from behind; either instance opens up the possibility that the bin will unbalance in your direction and flatten you. Rolling down a slope may bring the bin perilously close to 'rubbish escape velocity', especially if presented with a sudden halt. A sudden halt is likely to be caused by almost any obstacle, but simply dropping the bin from its wheels onto its flat bottom is normally enough.

Wheelie bins are functional, but they were never intended to be aesthetically pleasing. This has spawned the urban phenomenon of wheelie bin hiding. Certain companies have exploited this trend by making wheelie bin covers and camouflage.

Wheelie bin camouflage generally consists of four self-adhesive vinyl sheets that are fitted to the four faces of the bin. The sheets are imprinted with patterns that allow the bin to blend into its background, and generally just become less offensive to the sensitive eye. Examples include:

The bin can then be positioned against an appropriate surface and forgotten about. The camouflage is never so effective that there is the slightest danger of the wheelie bin being impossible to find again.

The patent for wheelie bin camouflage in the UK has been applied for by The Wheelie Bin Cover Company Limited based in Manchester. Similar cover manufacturing outfits exist worldwide.

The Bottom of the Bin

The fact that the average wheelie bin is about four feet tall poses a problem for someone who has unintentionally dropped something in the bottom. For the average individual this situation means that the top of the bin comes somewhere around their stomach or chest level. Leaning into the bin leads to considerable discomfort as various internal organs are pressed against its hard lip. Breathing may become difficult accompanied by the sensation of pounding blood behind the eyes and ears. Even with an arm outstretched, while clinging desperately to the edge with the other, the bottom of the bin will generally remain out of reach, unless further weight is pressed against the lip of the bin and the feet are partially or completely raised off of the floor.

It is at this point, with head and torso stuffed into the bin and feet raised into the air, that one of two things is likely to happen. Either the individual involved will lose balance and fall into the bin; or the bin will tip forward and slam to the ground, taking the poor fool inside with it. Both eventualities are less than a pleasant experience.

The process of reaching into a wheelie bin is normally made far worse by the environment around or inside the bin. Poor weather, like rain or wind, will change the grip of the material or the whole balance of the bin. The interior of wheelie bins, unless regularly cleaned, will also generally smell horribly of rotting garbage and there will often be a pool of unidentifiable liquid at the bottom, which may or may not have anything to do with kicking out time and late night vindaloos. It is only by tipping out, or falling into, the liquid that a full analysis is possible; but this is definitely something to be avoided, if you want to maintain command of the contents of your stomach.

The recommended method for getting something out of a wheelie bin is, firstly, to see if there's anyone else nearby who might do it for you. Failing this, tip the bin on its side and extract whatever is in the bottom from that angle. If there's something unpleasant seeping along the inside of the bin at this point, find a long stick and use it to tease the object out. It may be possible to use the stick method with an upright bin, but you will have to contend with stench-induced nausea and the effects of gravity trying to tease the object back to the bottom.

Bins are smelly, whether or not refuse bags are used to contain the rubbish placed inside them. Bin liners will inevitably acquire nicks, rips, and slashes; so odours, mush, and foul liquids will inevitably find their way to the bottom of the bin. After a while, bins in this condition will attract maggots, flies, and animals searching for scraps. They will also instantly induce nausea for anyone passing within a couple of feet.

This has led to the establishment of wheelie bin hygiene companies, which provide services to both business and domestic customers. These companies may be either small local concerns or world spanning franchise operations. The former may be nothing more than a man with a nice van, a bottle of bleach, and a sponge on the stick. The latter is likely to be substantially more impressive to the casual observer.

Franchise packages may include a bright and shiny van with official company logos; a rugged uniform; stationery, ranging from letterheaded paper to business cards; company branded cleaning materials; and comprehensive training, with or without the use of videos or weighty manuals. Most franchise operators claim that there are considerable profits to be made from wheelie bin cleaning, and this is quite possible, considering the massive, worldwide expansion of their use.

The wheelie bin has provided an amusing alternative to the shopping cart for students and partygoers. Standing so tall, they are reasonably roomy and provide a certain amount of support to an individual flopping around inside. Once a passenger is in place, the added value of the wheels comes into play, as friends can trundle the occupant along the street with a minimum of effort. For the sporty and anosmic (those without a sense of smell), late night bin racing is an attractive challenge. For anyone left with an unconscious companion to carry home even a dirty or half filled wheelie bin provides a tempting opportunity for an easy trip to the poor individuals final destination.

The wheelie bin has also become a medium of political expression: Two individuals were arrested in May 1998 in Birmingham, UK, when the wheelie bin they were occupying was pushed into the ranks of riot police trying to restrain demonstrators. The individuals involved were held overnight but released without charge.

1Bins are otherwise referred to as 'dustbins' or 'rubbish bins', and are better known as 'garbage cans' or even 'trash receptacles' in various parts of the English speaking world.2Dustmen are the people who take away rubbish, trash, or garbage... the products of human existence not included in the job descriptions of undertakers or the police.31 inch equals 2.5cm and 1 foot equals 30cm.4A kerb is the edge of a paved road, otherwise known as a 'curb'. In many places kerbs resemble infinitely long parallel lines of concrete toothpaste.