'Little Black Sambo' - A Controversial Book Content from the guide to life, the universe and everything 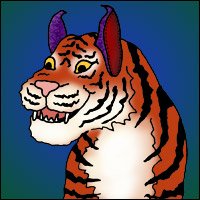 Once upon a time there was a little black boy, and his name was Little Black Sambo.

Few books have attracted as much controversy as Helen Bannerman's story published in 1899. Living in India with her husband, a doctor, the Scottish-born authoress wrote and illustrated a surreal tale for her children about a dark-skinned native boy.

Indian summers are hot, and the increased threat of disease persuaded the Bannermans to leave two of their young daughters in the care of a nurse at a mountain resort. The story came into Helen's mind during the train journey back to Madras. A family friend, admiring it, then took it to England to find a publisher, but the one they found, Grant Richards, persuaded Bannerman to sell the copyright for £5. She received no further income from the book.

It became one of the best-selling children's stories of the 20th Century, but you'll be unlikely to find a copy in any library today. The book was drawn into the centre of a conflict between what was held up as an innocent tale by some, but condemned as a derogatory racist stereotype by others.

In the tale, Sambo is kitted out in fine new clothes by his mother Black Mumbo and his father Black Jumbo, then proudly takes a walk in the jungle. Unfortunately, he attracts the attentions of four predatory tigers, who he avoids only by bribing each with an item of clothing:

But the Tiger said, 'What use would your shoes be to me? I've got four feet and you've got only two.'

.... But Little Black Sambo said, 'You could wear them on your ears.'

The tigers are ultimately defeated after they jealously fight over the garments. Seizing each other's tails, they chase in a circle around a tree, accelerating so fast that they turn into butter1. The story ends as Sambo's father collects the butter and takes it home for his wife to turn into pancakes.

And then they all sat down to supper. And Black Mumbo ate Twenty-seven pancakes, and Black Jumbo ate Fifty-five, but Little Black Sambo ate a Hundred and Sixty-nine, because he was so hungry.

The book's charming illustrations, elementary language and small size saw it adorn the bookshelves of nurseries across first the UK and then the United States of America. It featured on recommended reading lists for over 60 years, and at least 27 versions were published in the USA up to 1953, including both paperback and pop-up varieties. It also featured in many anthologies, and sequels were written by both Bannerman and other authors. Having one illustration for every page of text, the book is believed to have pioneered the 'picture book' format.

It may seem strange today, but the book's characterisation of Sambo only began to attract critical attention in the mid-1940s, when it became a target for American anti-racism campaigners.

Sambo is black. Very black. Although the tale is set in the jungles of India, the features and characteristics of Little Black Sambo, his mother Black Mumbo and his father Black Jumbo could easily be attributed to African-American negroes in the United States. Slavery had been abolished there only 40 years before, and it was startling to see a book which featured this sympathetic character who was very black indeed. Sambo was being portrayed in stark contrast to the treatment which negroes were experiencing in everyday life. For some whites, to buy the book may have been to somehow address one's conscience and accept the black man as a fellow human being.

Yet, the longer that racist attitudes prevailed on the streets, the greater the injustice was felt. Tensions rose and protests began to be directed at any evidence of society's portrayal of negroes as second class citizens. They were stereotyped in early movies as being ignorant and naive. They were parodied in minstrel shows. In literature, they were depicted as subservient.

Critics of Little Black Sambo cited many aspects of the tale which they saw as reinforcing negative stereotypes: his colourful clothing, the unsanitary way in which the butter was collected, and his greedy appetite. Illustrations on later editions even transported Sambo to the American South and exaggerated his facial features.

Then of course there was Sambo's name, synonymous with slavery as far back as 1564, when the Spanish applied it both to individual slaves and to half-breed children of black and American Indian parents. It eventually became used as a patronising nickname for black porters and shoe-shine boys, not to mention the cruelty of the school playground. Even the word 'black' was somewhat derogatory at the time: 'coloured' was the more acceptable alternative, as we see from the title of the civil rights organisation founded in 1909: The National Association for the Advancement of Colored People (NAACP).

Supporters of Bannerman state that this is purely an innocent tale, and its Indian setting could not have implied any connection to Africans nor slavery. Yet, this book was written for the very young, who in turn could not have been expected to have the maturity to differentiate its characters from those outside who were acting out very real scenes of social injustice.

Little Black Sambo in its original format started to disappear from library shelves in the 1970s, although there have been attempts to rebrand it into something more acceptable. One century on, we even have an African-American US president. Perhaps it's time to close this chapter and start to look forward once again.

It was on the shelves in the first class I ever taught in, where there were lots of black children, one of whom adored this book and would always choose it to sit and read, perhaps because at that time there were no other books with black heroes. The time came and we threw it out, with many others that had much more insidious racist connotations. There is no way that the book should be adapted or sanitised, but must go the same way that toy golliwogs went. A reminder of how things were.
— An h2g2 Researcher.