Sambo's Grave, Sunderland Point, Lancashire, UK Content from the guide to life, the universe and everything 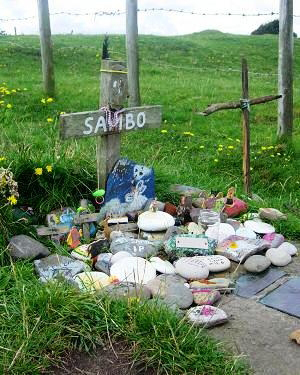 In a small patch of wilderness on the edge of Morecambe Bay in Lancashire lies a memorial to one of the darkest episodes in recent British history. It's the grave of a boy who died in 1736. The plot lies in the corner of a stone-walled field at the edge of the salt marsh; a barbed-wire fence stretches along one side. A small wooden cross bears the boy's nickname. Beneath lies an assortment of votive offerings to his memory: schoolchildren's colourfully painted pebbles, a jar of pennies, a few withered flowers.

A tombstone on the ground bears a plate with an inscription — an extraordinary poem written by someone who remembered him, or perhaps rediscovered his lonely grave six decades later.

We don't know much about Sambo, or even his real name, but he was presumably the personal servant of the master of a slaver vessel sailing the notorious 'Atlantic Triangle' route. Ships of the Royal Africa Company would load up with rum, guns, cloth and beads in Britain, then sail southwards to the Gold Coast of Africa where this would be exchanged for men, women and children captured in the surrounding area by slave traders.

Sambo would have been manacled to between 200 and 500 members of his race and then confined to an area below decks — maybe five feet long and 18 inches wide — for the 'Middle Passage' of the journey to the Americas. There was neither sanitation nor ventilation, and the journey could take many weeks. The lucky 20 per cent didn't survive it1. It's thought that those that did would have been imprisoned in a stockade, then auctioned off to the plantation owners in Maryland and Virginia.

The slavers returned to Britain packed to the gunwales with molasses, tobacco, cotton and a few slaves, too. Soon after his arrival at Sunderland Point (at that time the unloading port for the city of Lancaster) Sambo is said to have willed himself to die, after his master went away on another business trip.

A lucrative trade, slavery was only abolished in the UK in 1807, following the efforts of campaigners such as, notably, William Wilberforce. Lancaster traders had strongly opposed the abolition.

Sambo was a heathen, hence his lonely place of rest, around a half-mile west of the settlement at Sunderland Point. Christians did not wish his remains on their consecrated ground.

Some of the settlement still exists today, despite the trade moving elsewhere, as Morecambe Bay and the River Lune silted up further. A cluster of buildings lies at the end of a road across the marsh, which becomes flooded at high tide. The architecture is unusual, with many classic nautical features, as well as some distinctly West Indian embellishments. Some of the buildings were originally warehouses; one was a bath-house, where slaves and sailors were deloused on arrival. At the front of another lies the stump of a tree blown down in a gale in the late 20th Century. Known as the 'Cotton Tree', some believe it grew from a seed from one of the first cotton bales unloaded in Britain.

Sambo's 'sand-birds' are much in evidence. Redshank and golden plover dance along the water's edge as the tide recedes across the mud. Curlew and lapwing announce their presence in the salt marsh.

A few miles to the north, the twin edifices of Heysham Nuclear Power Station dominate the horizon, but otherwise, it feels as if nothing has changed in 300 years. A beautiful spot, ideal for reflection.

But still he sleeps - till the awakening Sounds
Of the Archangel's Trump new Life impart
Then the GREAT JUDGE his approbation founds
Not on Man's COLOR but his ... WORTH of HEART.

1Estimates vary, but it's believed that 40 per cent of Africans pressed into slavery did not survive either the inland journey to the coast or the Middle Passage across the Atlantic. At least two million Africans died during the Middle Passage between 1450 and 1850.